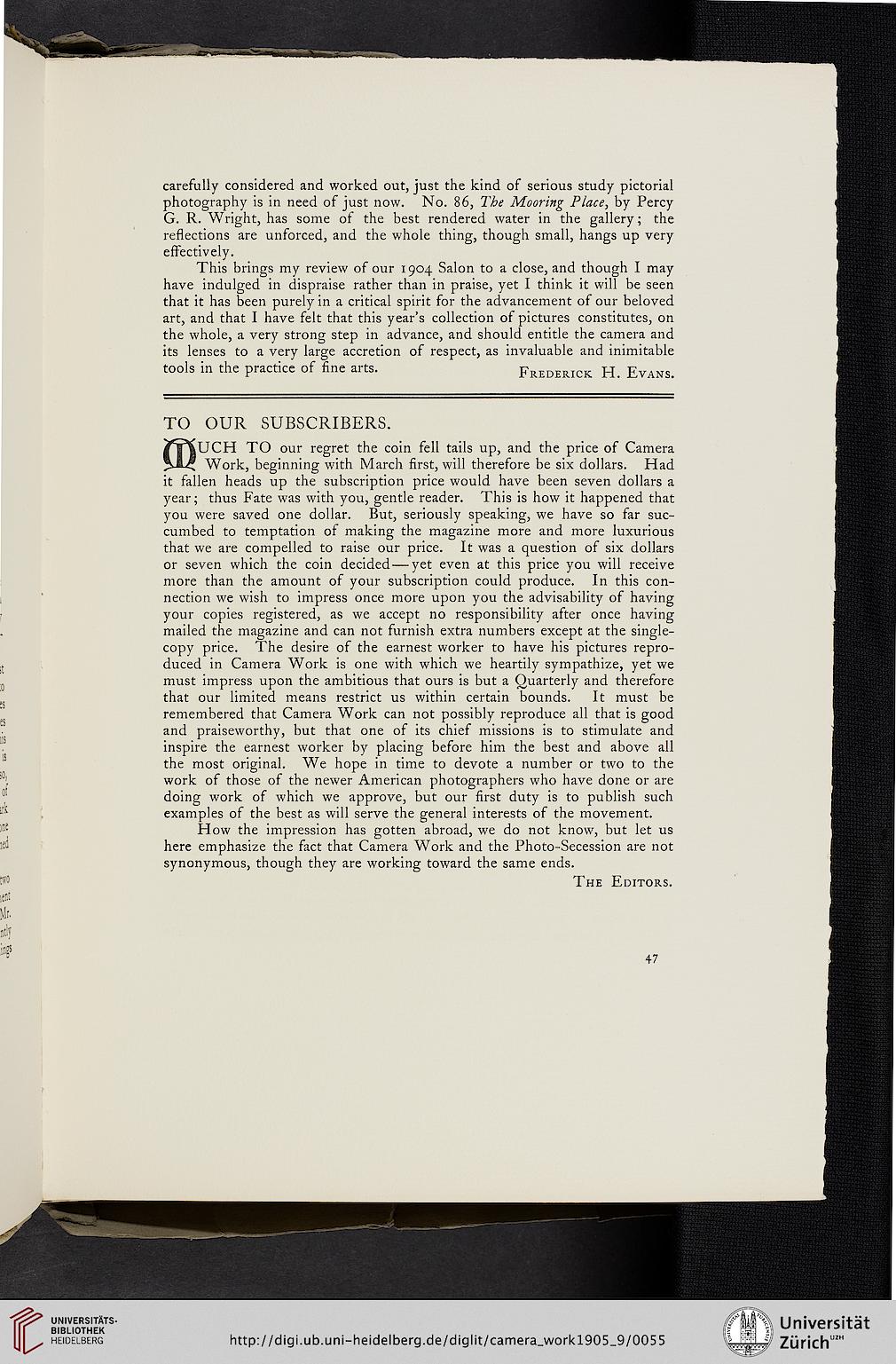 Information about OCR text
carefully considered and worked out, just the kind of serious study pictorial
photography is in need of just now. No. 86, The Mooring Place, by Percy
G. R. Wright, has some of the best rendered water in the gallery; the
reflections are unforced, and the whole thing, though small, hangs up very
effectively.
This brings my review of our 1904 Salon to a close, and though I may
have indulged in dispraise rather than in praise, yet I think it will be seen
that it has been purely in a critical spirit for the advancement of our beloved
art, and that I have felt that this year’s collection of pictures constitutes, on
the whole, a very strong step in advance, and should entitle the camera and
its lenses to a very large accretion of respect, as invaluable and inimitable
tools in the practice of fine arts. Frederick H. Evans.

TO OUR SUBSCRIBERS.
MUCH TO our regret the coin fell tails up, and the price of Camera
Work, beginning with March first, will therefore be six dollars. Had
it fallen heads up the subscription price would have been seven dollars a
year; thus Fate was with you, gentle reader. This is how it happened that
you were saved one dollar. But, seriously speaking, we have so far suc-
cumbed to temptation of making the magazine more and more luxurious
that we are compelled to raise our price. It was a question of six dollars
or seven which the coin decided — yet even at this price you will receive
more than the amount of your subscription could produce. In this con-
nection we wish to impress once more upon you the advisability of having
your copies registered, as we accept no responsibility after once having
mailed the magazine and can not furnish extra numbers except at the single-
copy price. The desire of the earnest worker to have his pictures repro-
duced in Camera Work is one with which we heartily sympathize, yet we
must impress upon the ambitious that ours is but a Quarterly and therefore
that our limited means restrict us within certain bounds. It must be
remembered that Camera Work can not possibly reproduce all that is good
and praiseworthy, but that one of its chief missions is to stimulate and
inspire the earnest worker by placing before him the best and above all
the most original. We hope in time to devote a number or two to the
work of those of the newer American photographers who have done or are
doing work of which we approve, but our first duty is to publish such
examples of the best as will serve the general interests of the movement.
How the impression has gotten abroad, we do not know, but let us
here emphasize the fact that Camera Work and the Photo-Secession are not
synonymous, though they are working toward the same ends.
The Editors.