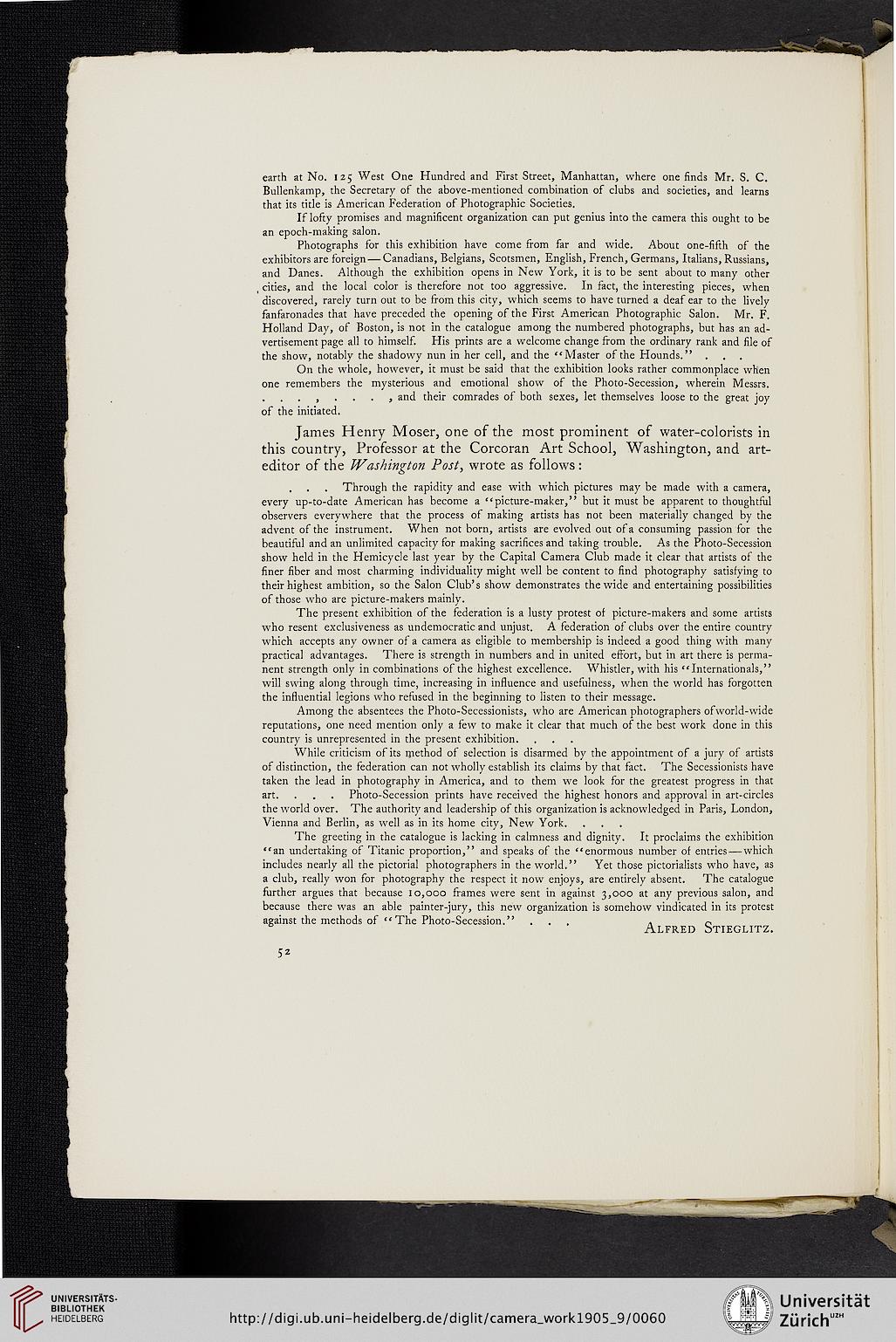 Information about OCR text
earth at No. 125 West One Hundred and First Street, Manhattan, where one finds Mr. S. C.
Bullenkamp, the Secretary of the above-mentioned combination of clubs and societies, and learns
that its title is American Federation of Photographic Societies.
If lofty promises and magnificent organization can put genius into the camera this ought to be
an epoch-making salon.
Photographs for this exhibition have come from far and wide. About one-fifth of the
exhibitors are foreign—Canadians, Belgians, Scotsmen, English, French, Germans, Italians, Russians,
and Danes. Although the exhibition opens in New York, it is to be sent about to many other
, cities, and the local color is therefore not too aggressive. In fact, the interesting pieces, when
discovered, rarely turn out to be from this city, which seems to have turned a deaf ear to the lively
fanfaronades that have preceded the opening of the First American Photographic Salon. Mr. F.
Holland Day, of Boston, is not in the catalogue among the numbered photographs, but has an ad-
vertisement page all to himself. His prints are a welcome change from the ordinary rank and file of
the show, notably the shadowy nun in her cell, and the “Master of the Hounds."
On the whole, however, it must be said that the exhibition looks rather commonplace when
one remembers the mysterious and emotional show of the Photo-Secession, wherein Messrs.
...,..., and their comrades of both sexes, let themselves loose to the great joy
of the initiated.

James Henry Moser, one of the most prominent of water-colorists in
this country, Professor at the Corcoran Art School, Washington, and art-
editor of the Washington Post, wrote as follows:

...Through the rapidity and ease with which pictures may be made with a camera,
every up-to-date American has become a "picture-maker," but it must be apparent to thoughtful
observers everywhere that the process of making artists has not been materially changed by the
advent of the instrument. When not born, artists are evolved out of a consuming passion for the
beautiful and an unlimited capacity for making sacrifices and taking trouble. As the Photo-Secession
show held in the Hemicycle last year by the Capital Camera Club made it clear that artists of the
finer fiber and most charming individuality might well be content to find photography satisfying to
their highest ambition, so the Salon Club’s show demonstrates the wide and entertaining possibilities
of those who are picture-makers mainly.
The present exhibition of the federation is a lusty protest of picture-makers and some artists
who resent exclusiveness as undemocratic and unjust. A federation of clubs over the entire country
which accepts any owner of a camera as eligible to membership is indeed a good thing with many
practical advantages. There is strength in numbers and in united effort, but in art there is perma-
nent strength only in combinations of the highest excellence. Whistler, with his “Internationals,"
will swing along through time, increasing in influence and usefulness, when the world has forgotten
the influential legions who refused in the beginning to listen to their message.
Among the absentees the Photo-Secessionists, who are American photographers of world-wide
reputations, one need mention only a few to make it clear that much of the best work done in this
country is unrepresented in the present exhibition.
While criticism of its method of selection is disarmed by the appointment of a jury of artists
of distinction, the federation can not wholly establish its claims by that fact. The Secessionists have
taken the lead in photography in America, and to them we look for the greatest progress in that
art.... Photo-Secession prints have received the highest honors and approval in art-circles
the world over. The authority and leadership of this organization is acknowledged in Paris, London,
Vienna and Berlin, as well as in its home city, New York.
The greeting in the catalogue is lacking in calmness and dignity. It proclaims the exhibition
“an undertaking of Titanic proportion," and speaks of the “enormous number of entries—which
includes nearly all the pictorial photographers in the world." Yet those pictorialists who have, as
a club, really won for photography the respect it now enjoys, are entirely absent. The catalogue
further argues that because 10,000 frames were sent in against 3,000 at any previous salon, and
because there was an able painter-jury, this new organization is somehow vindicated in its protest
against the methods of “The Photo-Secession." ...
Alfred Stieglitz.