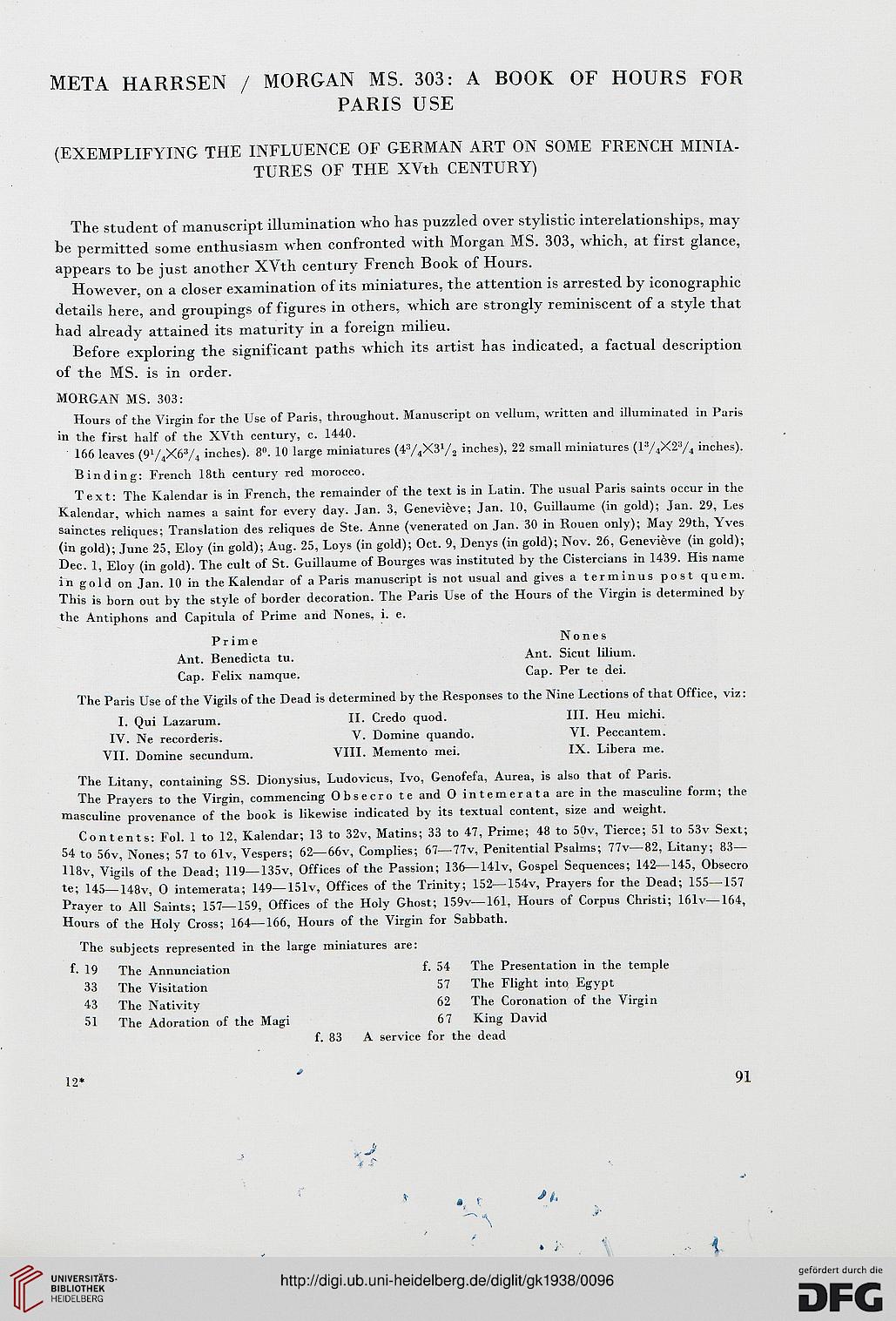 Information about OCR text
META HARRSEN / MORGAN MS. 303: A BOOK OF HOURS FOR

(EXEMPLIFYING THE INFLUENCE OF GERMAN ART ON SOME FRENCH MINIA-

TURES OF THE XVth CENTURY)

The Student of manuscript illumiiiation who has puzzled over stylistic interelationships, may
be permitted some enthusiasm when confronted with Morgan MS. 303, which, at first glance,
appears to be just another XVth Century French Book of Hours.

However, on a closer examination of its miniatures, the attention is arrested by iconographic
details here, and groupings of figures in others, which are strongly reminiscent of a style that
had already attained its maturity in a foreign milieu.

Before exploring the significant paths which its artist has indicated, a factual description
of the MS. is in order.

Hours of the Virgin for the Use of Paris, throughout. Manuscript on vellum, written and illuminated in Paris
in the first half of the XVth Century, c. 1440.

Text: The Kalendar is in French, the remainder of the text is in Latin. The usual Paris saints occur in the
Kalendar, which names a saint for every day. Jan. 3, Genevieve; Jan. 10, Guillaume (in gold); Jan. 29, Les
sainctes reliques; Translation des reliques de Ste. Anne (venerated on Jan. 30 in Rouen only); May 29th, Yves
(in gold); June 25, Eloy (in gold); Aug. 25, Loys (in gold); Oct. 9, Denys (in gold); Nov. 26, Genevieve (in gold);
Dec. 1, Eloy (in gold). The cult of St. Guillaume of Bourges was instituted by the Cistercians in 1439. His name
in gold on Jan. 10 in the Kalendar of a Paris manuscript is not usual and gives a terminus post quem.
This is born out by the style of border decoration. The Paris Use of the Hours of the Virgin is determined by
the Antiphons and Capitula of Prime and Nones, i. e.

The Paris Use of the Vigils of the Dead is determined by the Responses to the Nine Lections of that Office, viz:
I. Qui Lazarum. II. Credo quod. III. Heu michi.

The Prayers to the Virgin, commencing Obsecro te and O intemerata are in the masculine form; the
masculine provenance of the book is likewise indicated by its textual content, size and weight.

The subjects represented in the large miniatures are:

f. 19 The Annunciation f. 54 The Presentation in the temple

33 The Visitation 57 The Flight into Egypt

43 The Nativity 62 The Coronation of the Virgin

51 The Adoration of the Magi 67 King David