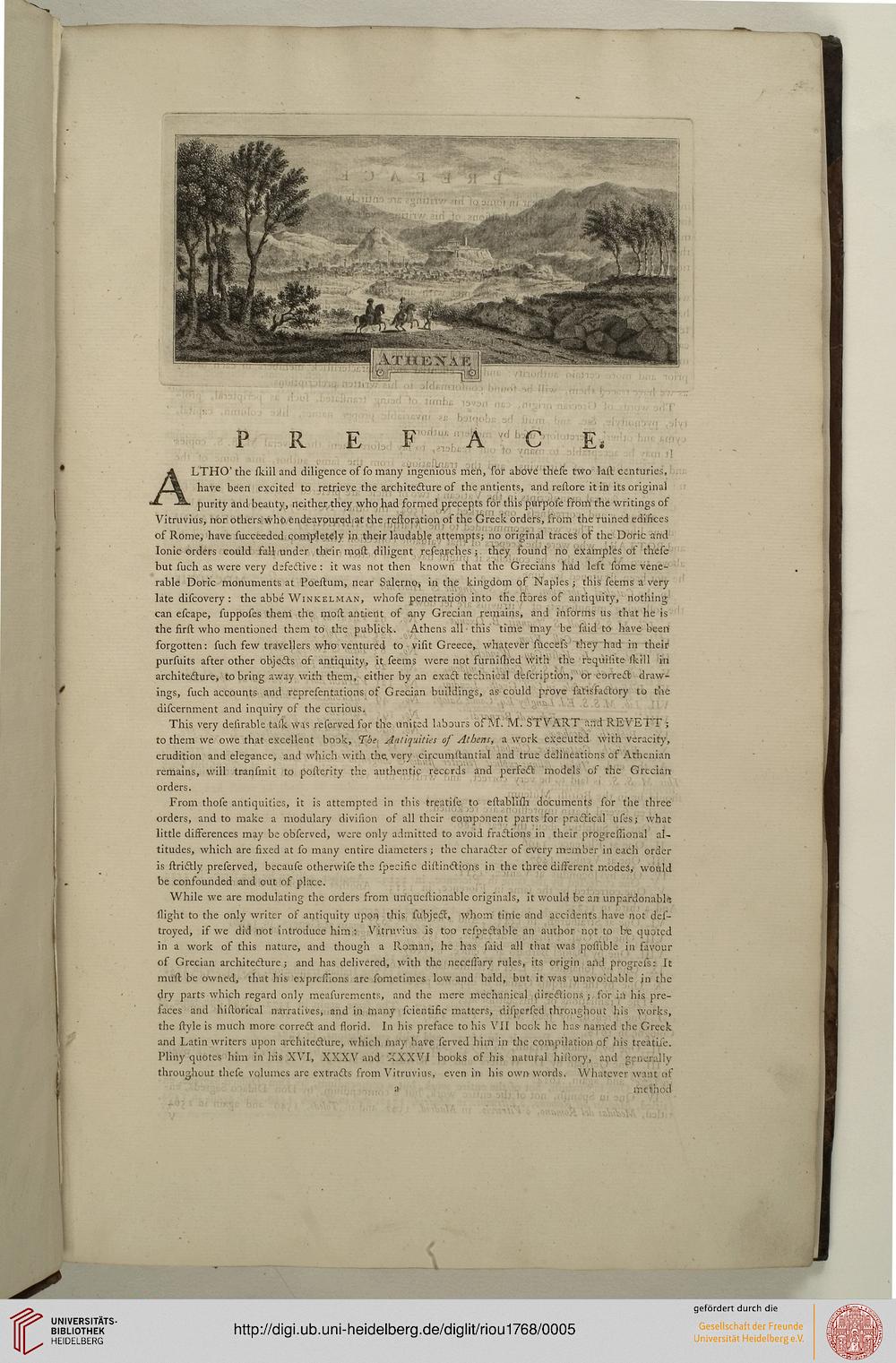 ALTHO' the skiil and diligence os so many ingenious men, sor above these two lait centuries,
have been excited to retrieve the architecture of theantients, and restore it in its original
purity and beauty, neither they who had formed precepts sor this purpose fsbm the writings of
Vitruviits, nor others who endeavoured at the restoration of the Greek orders, from the ruined edifices
of Rome, have succeeded completely in their laudable attempts; no original traces of the Doric and
Ionic orders could fall under their rnqst diligent research.es ; they found no examples of these
but such as were very defective : it was not then known that the Grecians had lest sbme vene-
rable Doric monuments at Pocltum, near Salerno, in the kingdom of Naples j this leemS a very
late discovery : the abbe Winkelman, whose penetration into the {tores of antiquity, nothing
can escape, supposes them the moil: antient of any Grecian remains, and insorms us that he is
the firlt who mentioned them to' the publick. Athens all ■ this'time may be laid to have been!
sorgotten: such few travellers who-ventured to visit Greece, whatever success they had in their
pursuits after other objects of antiquity, it seems were not furnimed with the requisite ("kill in
architecture, to bring away with them, either by an exact technical descriptio:i, or correct draw-
ings, such accounts and representations of Grecian buildings, as could prove sarisiactory to the
discernment and inquiry of the curious.
This very desirable talk was reserved sor the united labours of NT. M. STvART and RE VETT ;
to them we owe that excellent book, Toe Antiquities of Athens, a work executed with veracity,
erudition and elegance, and which with the. very circum'tantial and true delineations of Athenian
remains, will transmit to poltcrity the authentic records and perfect models of the Grecian
orders.
From those antiquities, it is attempted in this treatise to establish documents sor the three
orders, and to make a niodulary divilion of all their component parts for practical usesj what
little differences may be observed, were only admitted to avoid fractions in their progrcrlional al-
titudes, which are fixed at so many entire diameters ; the character of every member in each order
is strictly preserved, because otherwise the specisic diittnetions in the three different modes,- would
be confounded and out of place.
While we are modulating the orders from unquestionable originals, it would be an unpardonable
slight to the only writer of antiquity upon this (abject, whom time caul accidents have not des-
author not to be quoted

troyed, if we did not introduce him: Vitruvhis is too resnecta
in a work of this nature, and though a Roman, he has said

os Grecian architecture
mult be owned, that his exp
dry parts which regard only :
saces and historical narrativ
the stvle is much more correct and slorid. In his preface to!'
and Latin writers upon architecture, which rnrfy have served ]
Pliny quotes him In his XVI, XXXV and XXXVI books ,
throughout these volumes arc extracts srom Vitruvius, even i

and has delivered, with the necclsary rules
iT;ons are sometimes low and bald,
rasurements, and the mere median
, and in many seientifje matters, di
; VII

*le in (he
n his pre-
'ported thrcu
g'hout I
is works,
book lie ha
named
the Greek