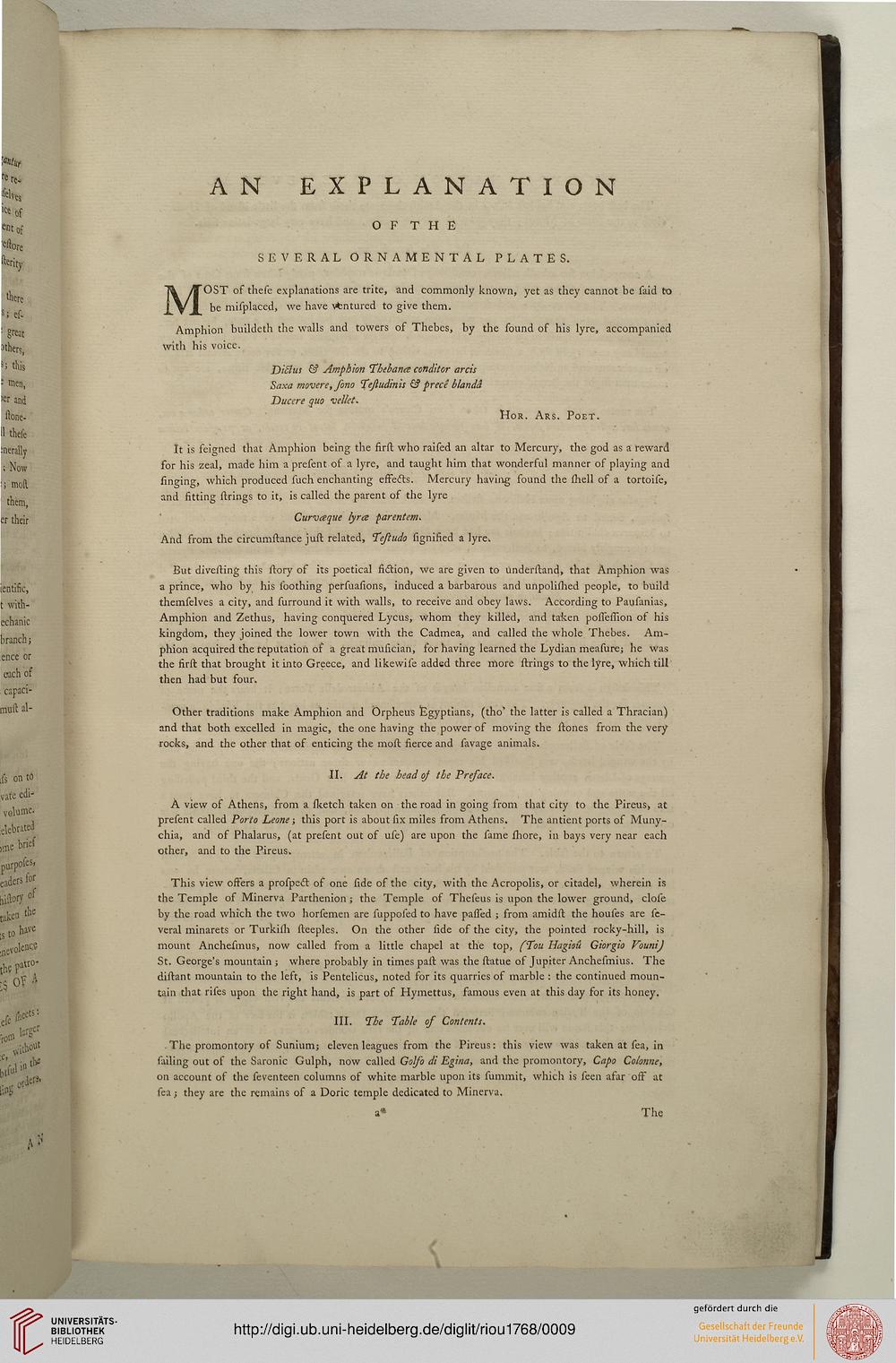 Information about OCR text
AN EXPLANATION
OF THE
SEVERAL ORNAMENTAL PLATES.
MOST of thcse explanations are trite, and commonly known, yet as they cannot be said to
be misplaced, we have ventured to give them.
Amphion buikleth the walls and towers of Thebes, by the sound of his lyre, accompanied
with his voice.
Di&us £? Amphion Thebana conditor arris
Saxa movere,fono Tejludinis & prece bsandd
Ducere quo vettet.
Hor. Ars. Poet.
It is feigned that Amphion being the firsi; who raised an altar to Mercury, the god as a reward
sor his zeal, made him a present of a lyre, and taught him that wondersul manner of playing and
singing, which produced such enchanting effects. Mercury having sound the (hell of a tortoise,
and fitting sirings to it, is called the parent of the lyre
Curvo'que /yra ^arentem-
And from the circumstance just related, Testudo signified a lyre.
But diverting this (lory of its poetical fiction, we are given to understand, that Amphion was
a prince, who by his Toothing persuasions, induced a barbarous and unpolished people, to build
themselves a city, and surround it with walls, to receive and obey laws. According to Paijsanias,
Amphion and Zethus, having conquered Lycus, whom they killed, and taken possesTion of his
kingdom, they joined the lower town with the Cadmea, and called the whole Thebes. Am-
phion acquired the reputation os a great musician, for having learned the Lydian measurej he was
the first that brought it Into Greece, and likewise added three more sirings to the lyre, which till
then had but four.
Other traditions make Amphion and Orpheus Egyptians, (tho' the latter is called a Thracian)
and that both excelled in magic, the one having the power of moving the Hones srom the very
rocks, and die other that of enticing the most fierce and savage animals.
II. At the bead of the Presace.
A view of Athens, from a iketch taken on the road in going from that city to the Pireus, at
present called Porto Leone; this port is about six miles from Athens. The antient ports of Muny-
chia, and of Phalarus, (at present out of use) are upon the same shore, in bays very near each
other, and to the Pireus.

This view offers a prospe<£l of one side of the city, with the Acropolis, or citadel, wherein is
the Temple of Minerva Parthenion; the Temple of Thcseus is upon the lower ground, close
by the road which the two horsemen are supposed to have palled ; from aroidst the houses are se-
veral minarets or Turkisli sleeples. On the other side of the city, the pointed rocky-hill, is
mount Anchesmus, now called from a little chapel at the top, (Tou Bagisu Giorgio Vouni)
St. George's mountain; where probably in times pail was the statue of Jupiter Anchesrnius. The
dislant mountain to the left, is Pentelicus, noted for its quarries of marble : the continued moun-
tain that rises upon the right hand, is part of Plymettus, famous even at this day for its honey.
III. The Table of Contents.
■ The promontory of Sunium; eleven leagues from the Pireus: this view was taken at sea, in
sailing out of the Saronic Gulph, now called GoJjb di Egina, and the promontory, Capo Cotonne,
on account of the seventeen columns of white marble upon its summit, which is secn afar off at
sea; they are the remains of a Doric temple dedicated to Minerva.
a* The