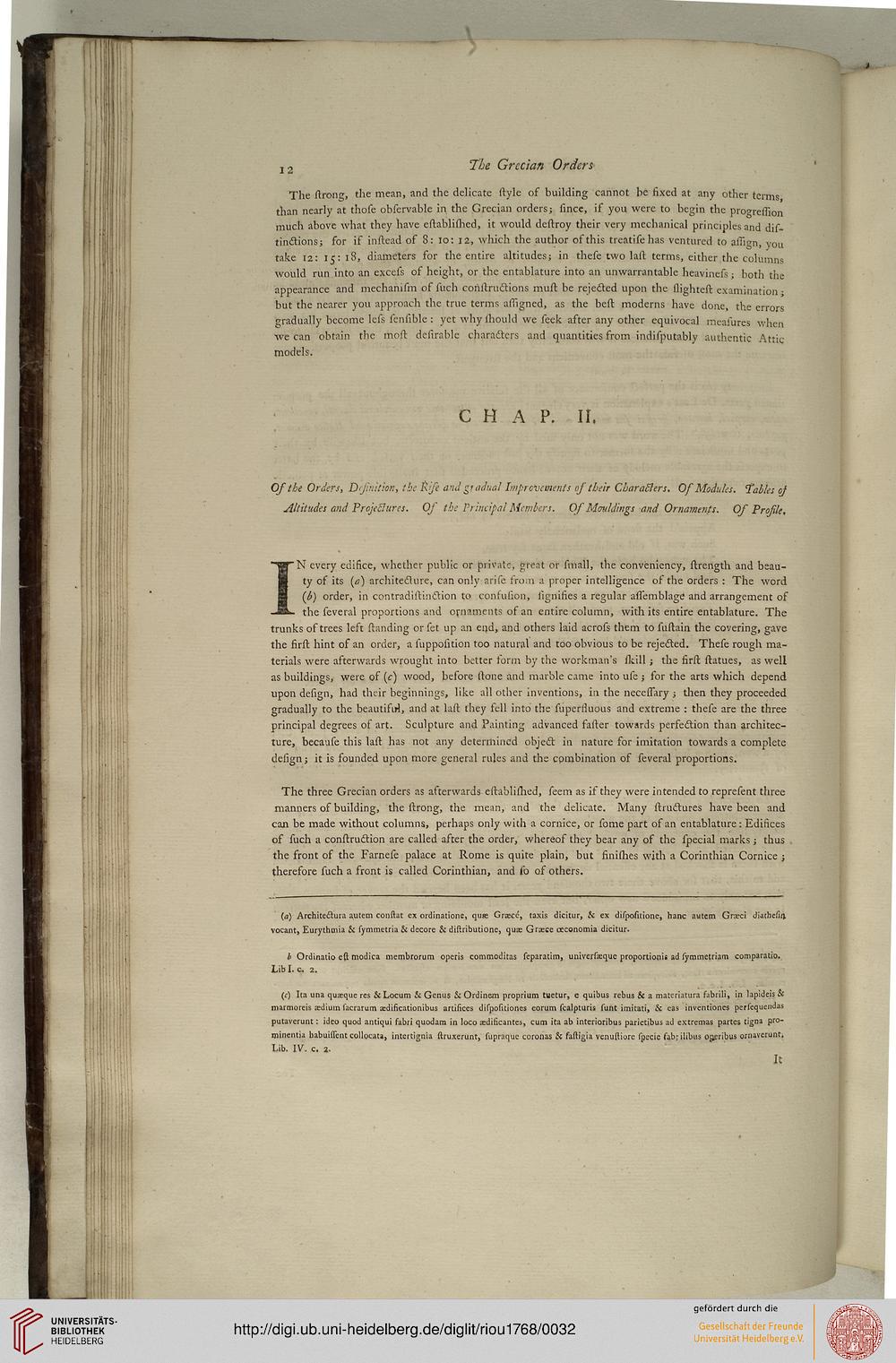 The strong, the mean, and the delicate style of building cannot he fixed at any other terms
than nearly at those observable in the Grecian orders; lincc, if you were to begin the progresiion
much above what they have establissicd, it would destroy their very mechanical principles and dis-
tuicHonSi for if instead of 8: 10: 12, which the author of this treatisehas ventured to asitgn, you
take 12: 15:18, diameters for the entire altitudes; in these two last terms, either,the columns
would run into an excess of height, or the entablature into an unwarrantable heaviness; both the
appearance and mechanism of sitch corillructions must be rejected upon the siighteft examination ■
but the nearer you approach the true terms astigned, as the best moderns have done, the errors
gradually become less icnsible: yet why should we seek after any other equivocal measures when
we can obtain the mod destrable characters and quantities from indisputably authentic Attic
models.

IN every edifice, whether public or ptn'a'c, great or srnall, the conveniency, strength and beau-
ty of its (a) architecture, can only arise from a proper intelligence of the orders : The word
(b) order, in contradistiuction to confulion, signifies a regular assemblage and arrangement of
the several proportions and ornaments of an entire column, with its entire entablature. The
trunks of trees left (landing or set up an end, and others laid across them to silstain the covering, gave
the first hint of an order, a supposition too natural and too obvious to be rejected. These rough ma-
terials were afterwards wrought into better form by the workman's ikill; the first statues, as well
as buildings, were of {c) wood, besore (tone and marble came into use ; for the arts which depend
upon destgn, had their beginnings, like all other inventions, in the necessary; then they proceeded
gradually to the beautisul, and at last they fell into the superrhious and extreme : these are the three
principal degrees of art. Sculpture and Painting advanced falter towards perfection than architec-
ture, because this last has not any determined object in nature for imitation towards a complete
deiign; it is sounded upon more general rules and the combination os several proportions.
The three Grecian orders as asterwards eitablished, seem as if they were intended to represent three
manners of budding, the strong, the mean, and the delicate. Many structures have been and
can be made without columns, perhaps only with a cornice, or some part of an entablature: Edifices
of such a construdtion are called after the order, whereof they bear any of the special marks; thus
the front of the Farnese palace at Rome is quite plain, but fmissies with a Corinthian Cornice ;
therefore such a front is called Corinthian, and Co of others.