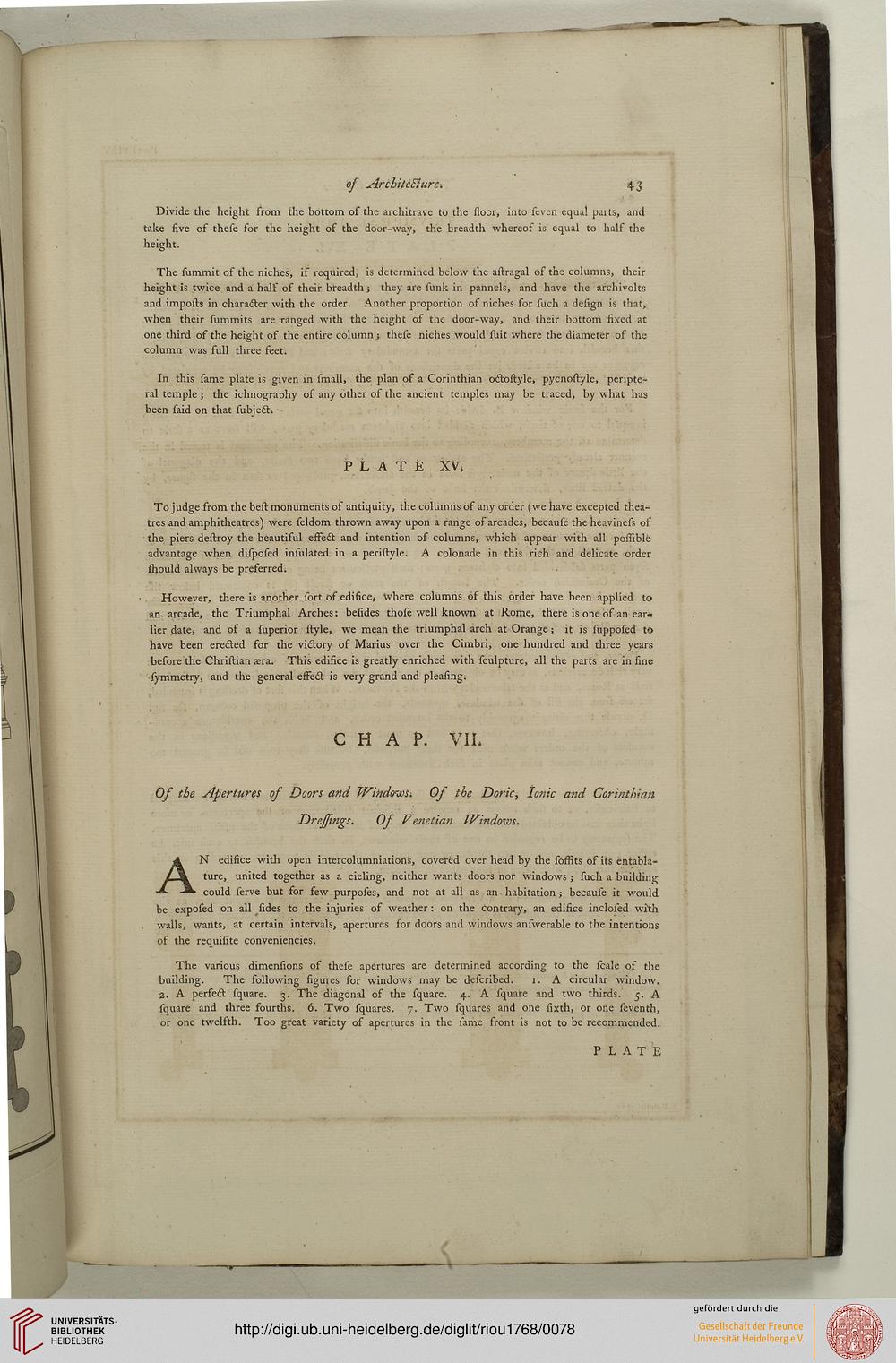 Scroll
OCR fulltext
Information about OCR text
of Architeblurt-. 4.3
Divide the height srom the bottom of the architrave to the floor, into seven equal parts, and
take five of these for the height os the door-way, the breadth whereos is equal to half the
height.
The summit of the niches, if required, is determined below the aftragal os the columns, their
height is twice and a half os their breadth; they are sunk in pannels, and have the archivolts
and imports in character with the order. Another proportion of niches sor siich a desjgn is that,
when their summits are ranged with the height of the door-way, and their bottom fixed at
one third of the height of the entire column.; these niches would suit where the diameter os the
column was full three feet.
In this same plate is given in small, the plan of a Corinthian ocTostylc, pycnoslylc, peripte-
ral temple; the ichnography of any other of the ancient temples may be traced, by what has
been said on that mbjedh ■

P L A T £ XV,
To judge from the best monuments of antiquity, the columns of any order (we have excepted thea-
tres and amphitheatres) were seldom thrown away upon a range of arcades, because theheaviness of
the piers destroy the beautisul effect and intention of columns, which appear with all postible
advantage when disposed insulated in a peristyle. A colonade in this rich and delicate order
mould always be preferred.
However, there is another sort of edifice, where columns of this order have been applied to
an arcade, the Triumphal Arches: besides those well known at Rome, there is one os an ear-
lier date, and os a superior style, we mean the triumphal arch at Orange; it is supposed to
have been erected for the victory of Marius over the Cimbri, one hundred and three years
besore the Christian a?ra. This edifice is greatly enriched with sculpture, all the parts are in fine
symmetry, and the general effect is very grand and pleasing.

CHAP. VII,
Of the Apertures of Doors and Windows-. Of the Doric, Ionic and Corinthian
DreJJings. Os Venetian Windows.
AN edifice with open intercolumniations, covered over head by the sofsits os its entabla-
ture, united together as a cieling, neither wants doors nor windows; such a building
could serve but for few purposes, and not at all as an habitation; because it would
be exposed on all sides to the injuries of weather: on the contrary, an edifice incloied with
waits, wants, at certain intervals, apertures sor doors and windows answerable to the intentions
of the requisite conveniencies.
The various dimensions of these apertures are determined according to the scale of the
building. The sollowing figures for windows may be described. 1. A circular window.
2. A persect square. 3. The diagonal of the square. 4. A square and two thirds. 5. A
square and three fourths. 6. Two squares. 7. Two squares and one sixth, or one seventh,
or one twelsth. Too great variety of apertures in the same sront is not to be recommended.