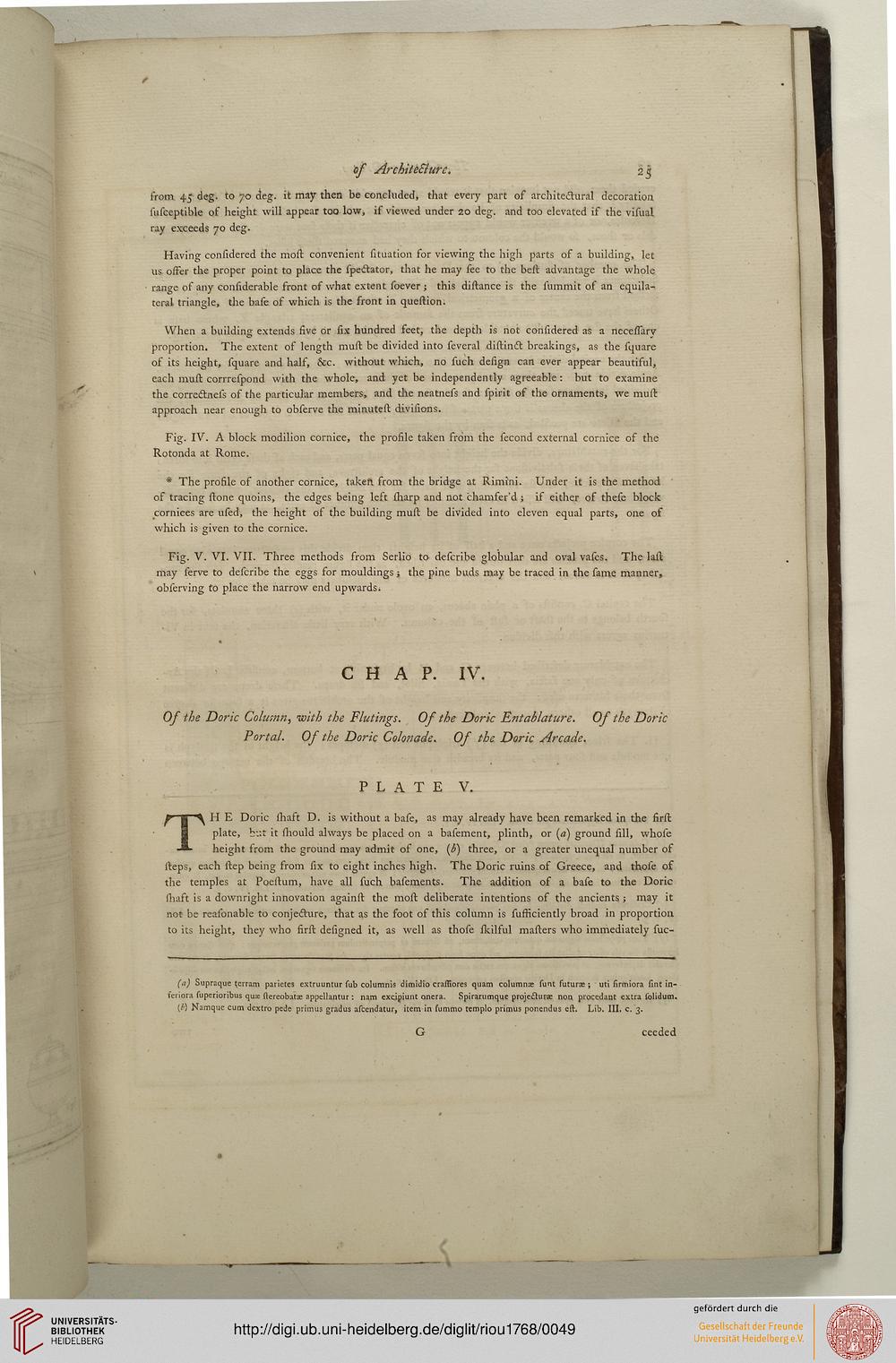 Information about OCR text
of Architecture, 25
srom 45 deg. to 70 cleg, it may then be concluded, that every part of architectural decoration
susceptible of height will appear too low, if viewed under 20 deg. and too elevated if the visual
ray exceeds 70 deg.
Having coniidered the niost convenient situation sor viewing the high parts of a building, let
us osser the proper point to place the spectator, that he may see to the bell: advantage the whole
■ range of any considerable front of what extent soever ; this disiance is the summit os an equila-
teral triangle, die base of which is the sront in question.
When a building extends five or six hundred seet, the depth is not considered as a nccessarv
proportion. The extent of length mutt be divided into several distinct breakings, as the square
of its height, square and half, ccc. without which, no such design can ever appear beautiful,
each raust corrrespond with the whole, and yet be independently agreeable: but to examine
the correctness of the particular members, and the neatness and spirit of the ornaments, we mast
approach near enough to observe the minutest divisions.
Fig. IV. A block modilion cornice, the profile taken from the second external cornice of the
Rotonda at Rome.
* The profile of another cornice, taken srom the bridge at Rimini. Under it is the method
of tracing stone quoins, the edges being left sharp and not chamser'd -, if either of thesc block
cornices are used, the height of the building mutt be divided into eleven equal parts, one os
which is given to the cornice.
Fig. V. VI. VII. Three methods srom Serlio to describe globular and oval vases. The lasl
may serve to describe the eggs for mouldings; the pine buds may be traced in the same manner,
observing to place the narrow end upwards.

CHAP. IV,
Of the Doric Column, with the Flutings. Of the Doric Entablature. Of the Doric
Portal. Os the Doric Colo?tade. Of the Doric Arcade.
PLATE V.
TH E Doric fliaft D. is without a base, as may already have been remarked in the first
plate, b::t it should always be placed on a basement, plinth, or (a) ground sill, whose
height srom the ground may admit of one, (6) three, or a greater unequal number of
lleps, each step being from six to eight inches high. The Doric ruins of Greece, and those of
the temples at Poestum, have all such basements. The addition of a base to the Doric
siiaft is a downright innovation against the molt deliberate intentions of the ancients; may it
not be rcasonable to conjecture, that as the foot of this column is sufficiently broad in proportion
to its height, they who first deiigned it, as well as those skilful masters who immediately suc-