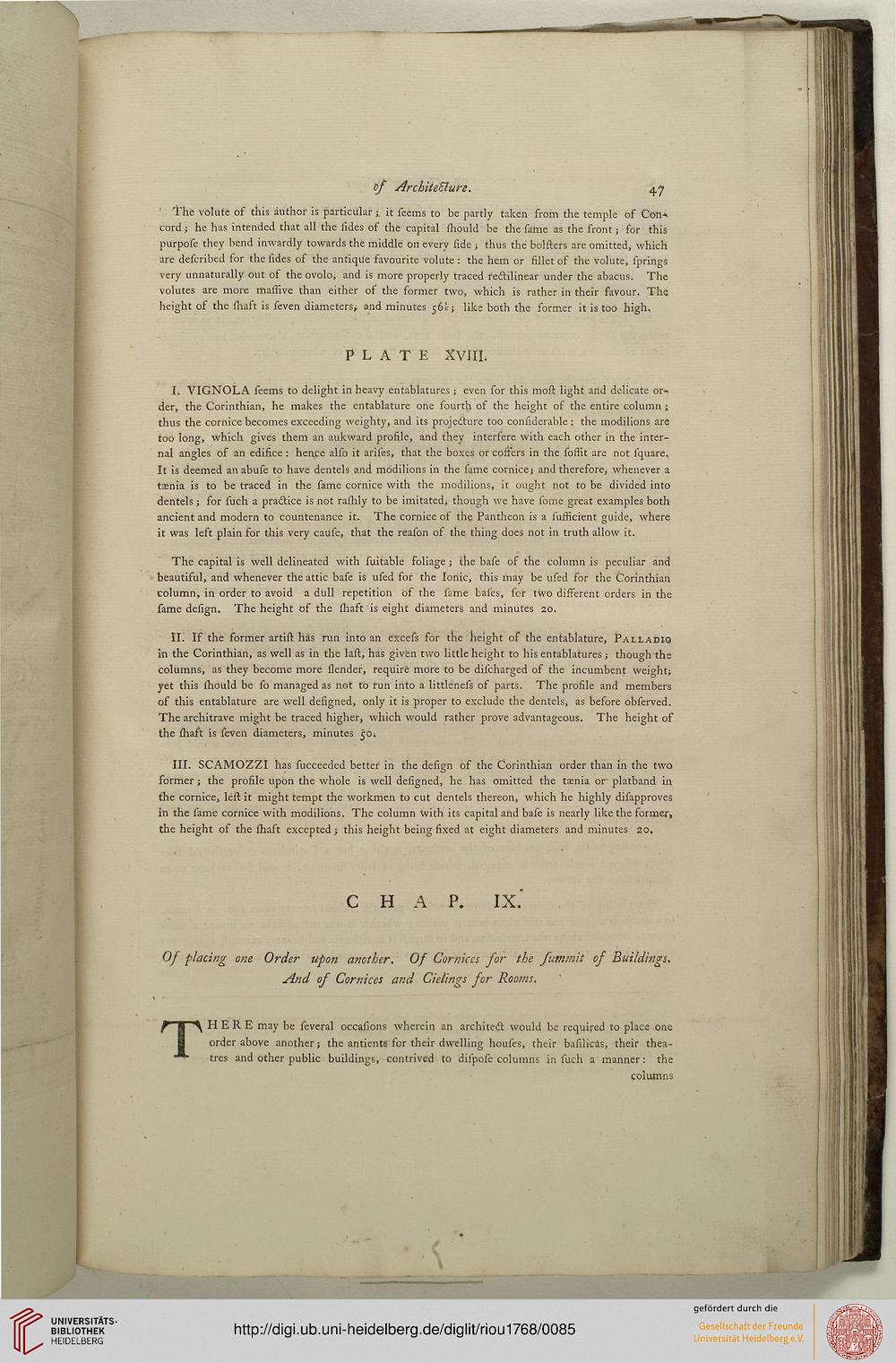 Information about OCR text
of Architecture.

' The volute of this author is particular ■ it secms to be partly taken from the temple of Con*
cord; he has intended that all the sides of the capital ssiould be the same as the front; for this
purpose they bend inwardly towards the middle on every side ; thus the bolsters are omitted, which
are described for the sides of the antique favourite volute: the hem or sillet of the volute, springs
very unnaturally out of the ovolo, and is more properly traced rectilinear under the abacus. The
volutes are more rhassive than either of the former two, which is rather in their savour. The
height of the (haft is seven diameters; and minutes 56*1 like both the sormer it is too high.

I. VIGNOLA seems to delight in heavy entablatures; even for this mod light and delicate or-
der, the Corinthian, he makes the entablature one sourth of the height of the entire column ;
thus the cornice becomes exceeding weighty, and its projecture too considerable : the modilions are
too long, which gives them an aukward profile, and they interfere with each other in the inter-
nal angles of an edifice : hence also it arises, that the boxes or coffers in the sofrit are not square,
It is deemed an abuse to have dcntels and modilions in the same cornice; and therefore, whenever a
taenia is to be traced in the same cornice with the modilions, it ought not to be divided into
dentels ; for such a practice is not rasiily to be imitated* though we have some great examples both
ancient and modern to countenance it. The cornice of the Pantheon is a susficient guide, where
it was left plain for this very cause, that the reason of the thing does not in truth allow it.
The capital is well delineated with suitable foliage; the base of the column is peculiar and
beautiful, and whenever the attic base is used for the Ionic, this may be used for the Corinthian
column, in order to avoid a dull repetition of the same bases, scf two different orders in the
same design. The height of the Ihaft is eight diameters and minutes 20.
II. If the former artist has run into an excess for the height of the entablature, Palladio
in the Corinthian, as well as in the last, has given two little height to his entablatures; though the
columns, as they become more slender, require more to be discharged of the incumbent weight;
yet this ssiould be so managed as not to run into a littleness of parts. The profile and members
of this entablature are well designed, only it is proper to exclude the dentels, as before observed.
The architrave might be traced higher, which would rather prove advantageous. The height of
the shaft is severi diameters, minutes 50;
III. SCAMOZZI has succeeded better in the design of the Corinthian order than in the two
former; the profile upon the whole is well designed, he lias omitted the t^nia or platband in
the cornice, lest it might tempt the workmen to cut dentels thereon, which he highly disapproves
in the same cornice with modilions. The column With its capital and base is nearly like the former j
the height of the shaft excepted; this height being fixed at eight diameters and minutes 20.

Of placing one Order upon another. Of Cornices for the summit of Bui/dings,
Asid of Cornices and Cielings for Rooms.

PI E R E may be several occasions wherein an architect would be required to place one
order above another; the antients for their dwelling houses, their basilicas, their thea-
tres and other public buildings, contrived to dispose columns in such a manner: the
columns