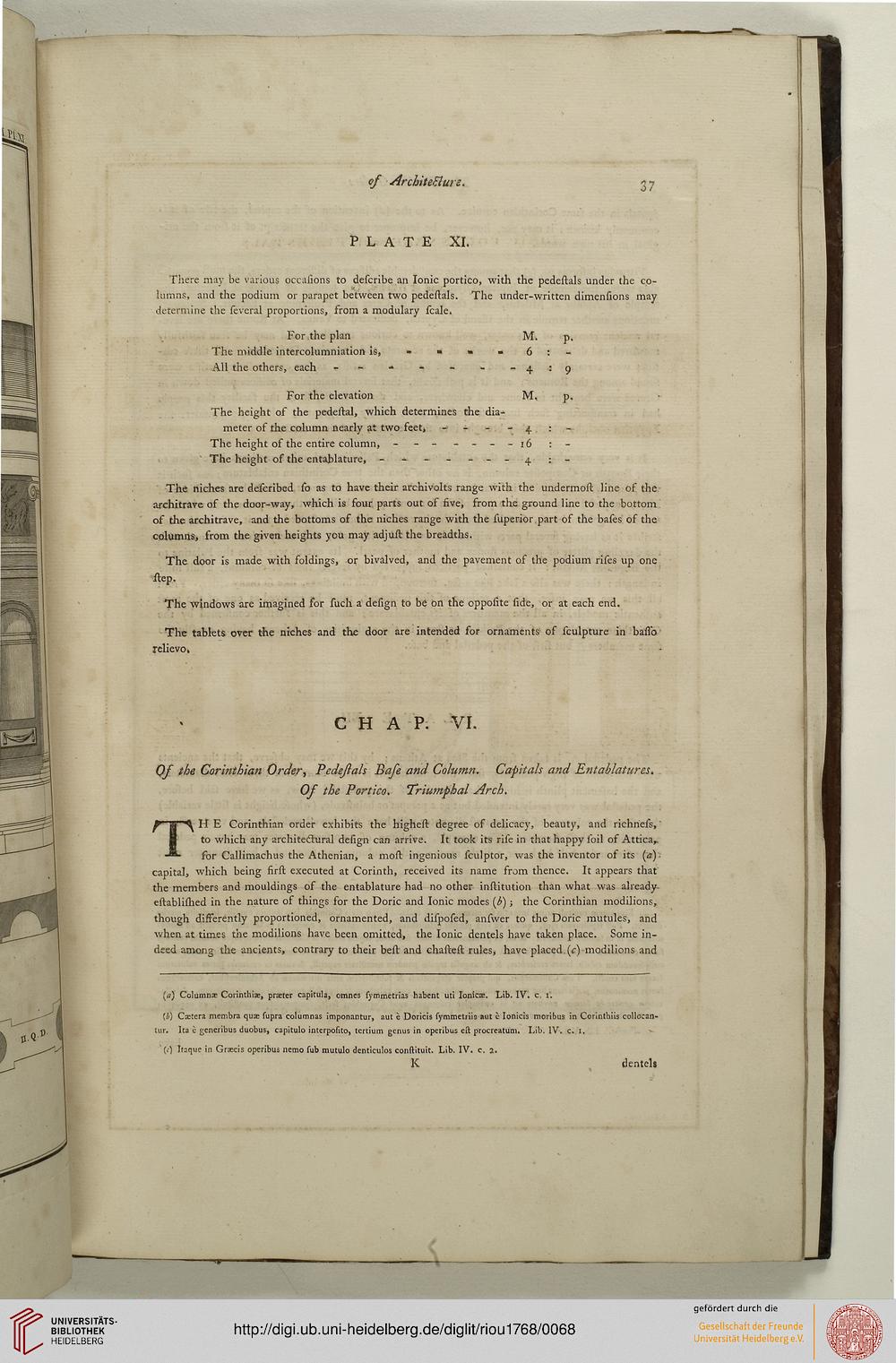 Information about OCR text
of Architecture,

PLATE XI.
There may be various occalions to describe an Ionic portico, with the pedestals under the co-
lumns, and the podium or parapet between two pedestals. The under-written dimensions may
determine the sevcral proportions, from a modulary scale.
For .the plan M. p.
The middle intercolumniation is, ■* ■ » ■ 6 :
All the others, each - — - - - - -4:9
For the elevation M. p.
The height of the pedestal, which determines the dia-
meter of the column nearly at two feet, - - - - 4 :
The height of the entire column, - -- - - - - 16 : -
' The height of the entablature, ------.-^j-
The niches are described so as to have their archivolts range with the undermost line of the.
architrave of the door-way, which is four parts out of five, from the ground line to the bottom
of the architrave, and the bottoms os the niches range with the superior part os the bases os the
columns, srom the given heights ycu may adjust the breadths.
The door is made with soldings, or bivalved, and the pavement of the podium rises up one
itep.
The windows are imagined sor such a design to be on the oppolite side, or at each end.
The tablets over the niches and the door are intended sor ornaments of sculpture in basib
relievo,

CHAP. VI.
Os the Corinthian Order, Pedejlah Bafe and Column. Capitals and Entablatures.
Of the Portico, Triumphal Arch.
TH E Corinthian order exhibits the higheit degree of delicacy, beauty, and richness,'
to which any architectural design can arrive. It took its rise in that happy soil of Attica,,
for Callimachus the Athenian, a most ingenious sculptor, was the inventor of its (a)-
capital, which being first executed at Corinth, received its name from thence. It appears that
the members and mouldings of the entablature had no other institution than what was already-
establissied in the nature of tilings sor the Doric and Ionic modes {b) -, the Corinthian modilions,
though disserently proportioned, ornamented, and disposed, answer to the Doric mutules, and
when at times the modilions have been omitted, the Ionic dentels have taken place. Some in-
deed among the ancients, contrary to their belt and chastest rules, have placed.(c) modilions and