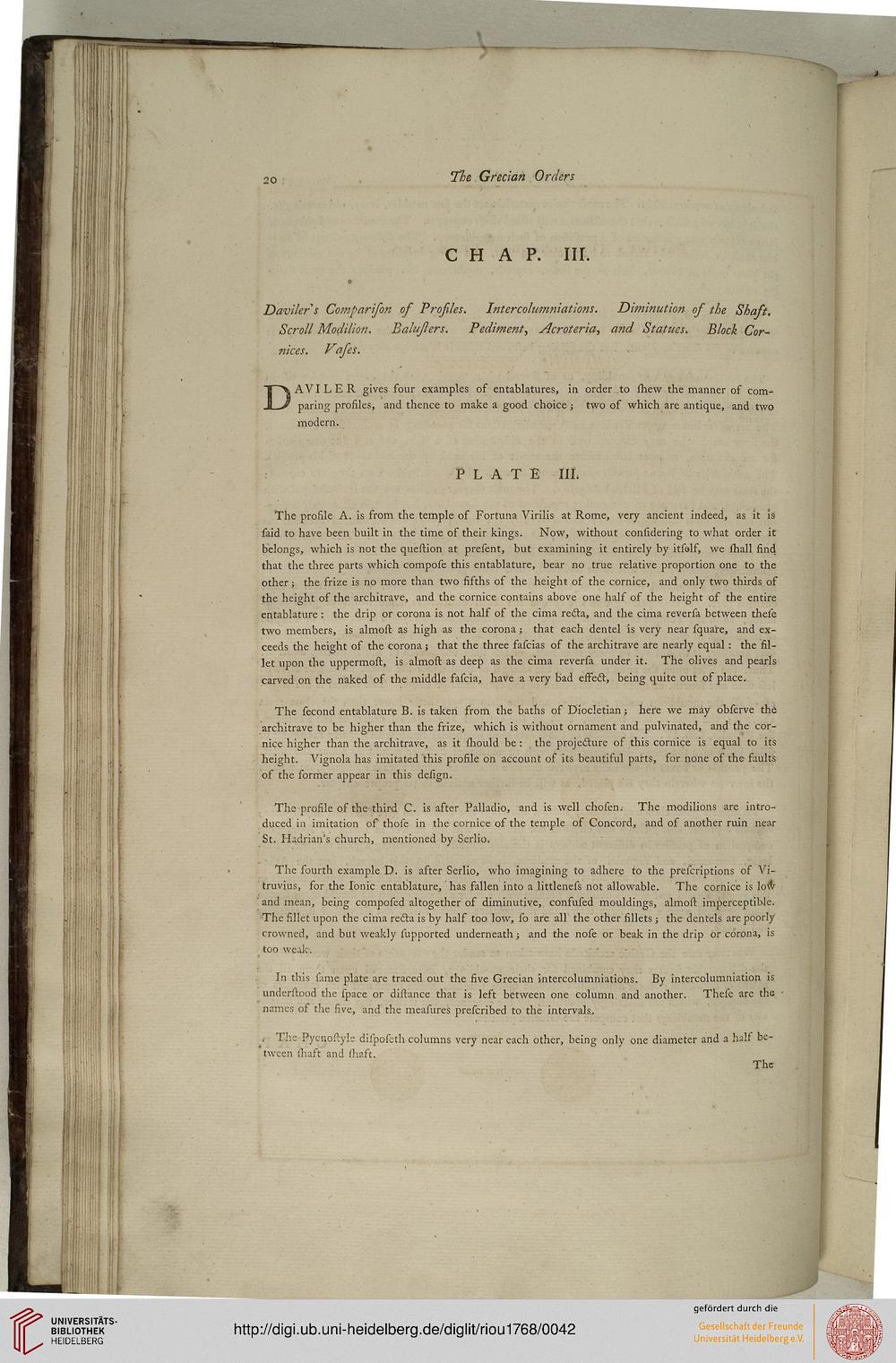 AVILER gives four examples of entablatures, in order to mew the manner of com-
paring profiles, and thence to make a good choice; two of which are antique, and two
modern.

The profile A. is from the temple of Fortuna Virilis at Rome, very ancient indeed, as it is
said to have been built in the time of their kings. Now, without considering to what order it
belongs, which is not the question at present, but examining it entirely by itsolf, we (hall find
that the three parts which compose this entablature, bear no true relative proportion one to the
other; the frize is no more than two fifths of the height of the cornice, and only two thirds of
the height of the architrave, and the cornice contains above one half of the height of the entire
entablature : the drip or corona is not half of the cima recta, and the cima reveria between thele
two members, is almost as high as the corona; that each dentel is very near square, and ex-
ceeds the height of the corona; that the three fascias of the architrave are nearly equal: the fil-
let upon the uppermost, is almost as deep as the cima reversa under it. The olives and pearls
carved on the naked of the middle fascia, have a very Bad effect, being quite out of place.
The second entablature B. is taken from the baths of Diocletian; here we may observe the
architrave to be higher than the frize, which is without ornament and pulvinated, and the cor-
nice higher than the architrave, as it should be: . the presecture of this cornice is equal to its
height. Vignola has imitated this profile on account of its beautiful parts, for none of the faults
of the sormer appear in this design.
The profile of the third C. is after Palladio, and is well chosen.- The modilions are intro-
duced in imitation of those in the cornice of the temple of Concord, and of another ruin near
St. Hadrian's church, mentioned by Serlio.
The fourth example D. is after Serlio, who imagining to adhere to the prescriptions of Vi-
' truvius, for the Ionic entablature, has fallen into a littleness not allowable. The cornice is low
"and mean, being composed altogether of diminutive, confused mouldings, almost imperceptible.
-The fillet upon the cima recta is by half too low, so are all the other fillets; the dentels are poorly
crowned, and but weakly supported underneath; and the nose or beak in the drip or corona, is
too weak.

In this same plate are traced out the five Grecian intercolumniations. By intercolum station is
understood the space or distance that is left between one column and another. These are the
names of the five, and the measures prescribed to the intervals,
: The Pycnoftyk disposcth columns very near each other, being only one diameter and a hals be-
tween (haft and siiaft.