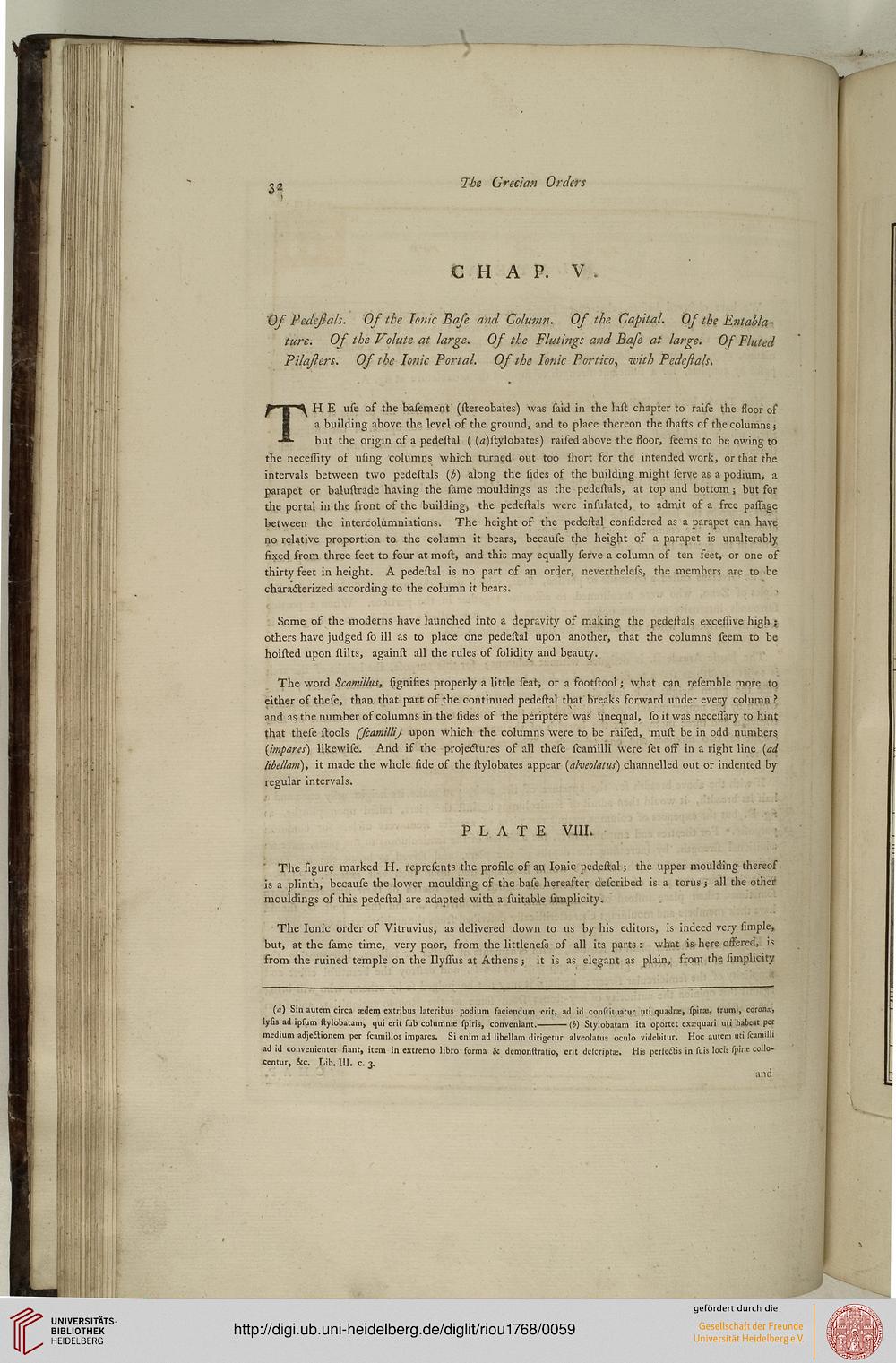 TH E use of the basement (slereobates) was sind in the last chapter to raise the ssoor of
a building above the level of the ground, and to place thereon the shafts of the columns;
but the origin of a pedeslal ( (e;)stylobates) raised above the ssoor, seems to be owing to
the neceslity of usmg columns which turned out too short for the intended work, or that the
intervals between two pedestals {b~) along the sides of the building might serve as a podium, a
parapet or balustrade having the same mouldings as the pedestals, at top and bottom; but for
the portal in the front of the buildingj the pedestals were insulated, to admit of a free pallage
between the intercolumniations. The height of the pedestal considered as a parapet can have
no relative proportion to the column it bears, becausc the height of a parapet is unalterably,
fixed srom three feet to four at moil, and this may equally serve a column of ten seet, or one of
thirty feet in height. A pedeslal is no part os an order, nevertheless, the members are to be
characterized according to the column it bears.
Some os the moderns have launched into a depravity of making the pedestals excemve high j
others have judged so ill as to place one pedeslal upon another, that the columns seem to be
hoisled upon slilts, againsl all the rules of solidity and beauty.
The word Scamilks, signifies properly a little seat, or a footstool; what can reserable more to
either of these, than that part of the continued pedeslal that breaks forward under every column ?
and as the number of columns in the sides of the periptere was unequal, so it was neceslary to hint
that these stools (fcamilli) upon which the columns were to be raised, musl be in odd numbers
{jmpares) likewise. And is the projectures of all these scamilli were set off in a right line [ad
libellani), it made the whole side of the slylobates appear {aheolatia) channelled out or indented by
regular intervals.

PLATE VilL
The figure marked H. represents the profile of an Ionic pedeslal; the upper moulding thereos
is a plinth, because the lower moulding of the base hereaster described. is a torus; all the other
mouldings of this pedeslal are adapted with a suitable iimplicity.
The Ionic order of Vitruvius, as delivered down to us by his editors, is indeed very liniple,
but, at the same time, very poor, from the littleness of all its parts: what is here offered, is
from the ruined temple on the Ilyssus at Athens; it is as elegant as plain, srom the iimplicity