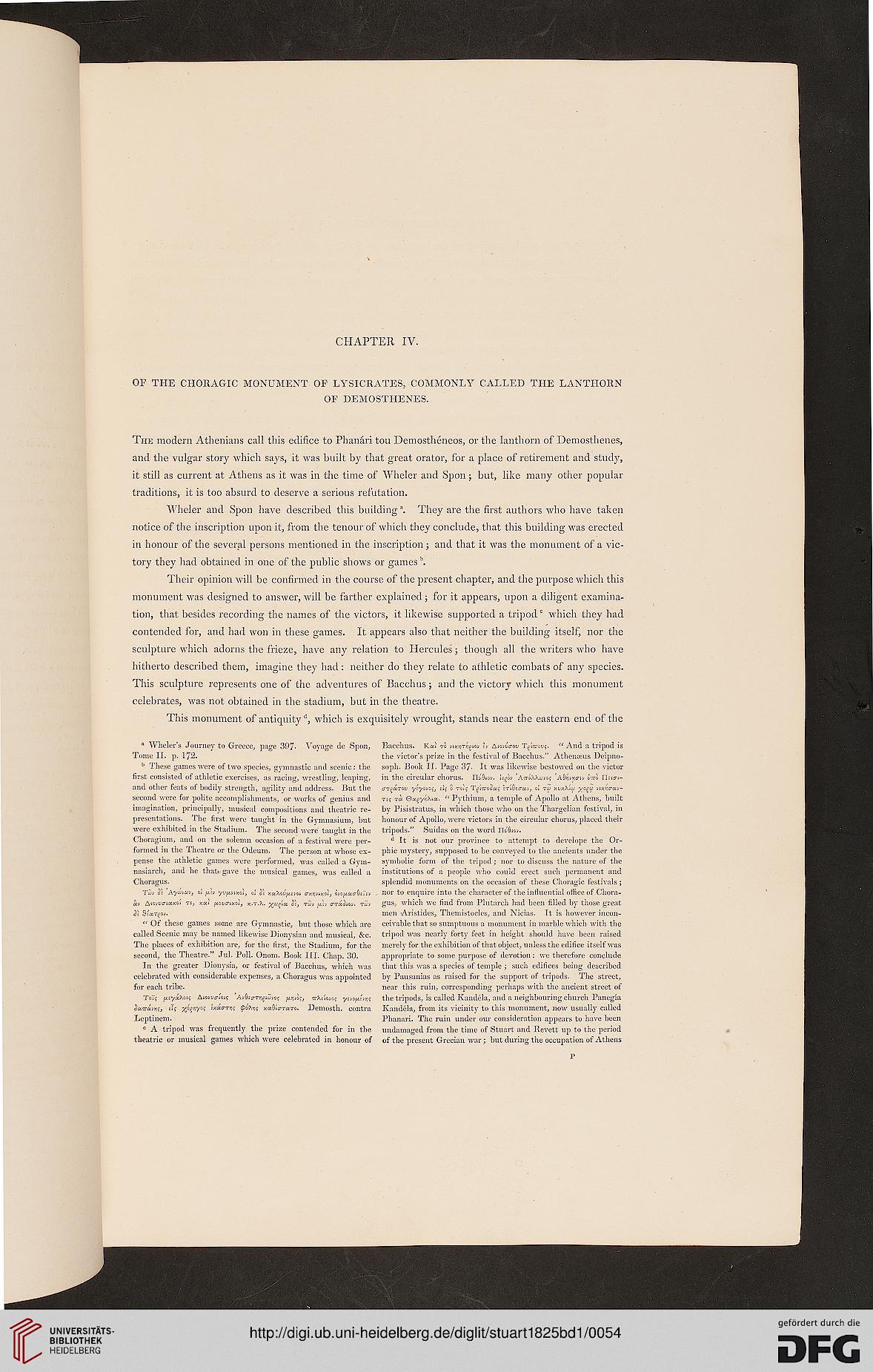 OF THE CHORAGIC MONUMENT OF LYSICRATES, COMMONLY CALLED THE LANTHORN

The modern Athenians call this edifice to Phanari tou Demostheneos, or the lanthorn of Demosthenes,
and the vulgar story which says, it was built by that great orator, for a place of retirement and study,
it still as current at Athens as it was in the time of Wheler and Spon; but, like many other popular
traditions, it is too absurd to deserve a serious refutation.

Wheler and Spon have described this building3. They are the first authors who have taken
notice of the inscription upon it, from the tenour of which they conclude, that this building was erected
in honour of the several persons mentioned in the inscription; and that it was the monument of a vic-
tory they had obtained in one of the public shows or games''.

Their opinion will be confirmed in the course of the present chapter, and the purpose which this
monument was designed to answer, will be farther explained; for it appears, upon a diligent examina-
tion, that besides recording the names of the victors, it likewise supported a tripodc which they had
contended for, and had won in these games. It appears also that neither the building itself, nor the
sculpture which adorns the frieze, have any relation to Hercules; though all the writers who have
hitherto described them, imagine they had : neither do they relate to athletic combats of any species.
This sculpture represents one of the adventures of Bacchus; and the victory which this monument
celebrates, was not obtained in the stadium, but in the theatre.

This monument of antiquityd, which is exquisitely wrought, stands near the eastern end of the

b These games were of two species, gymnastic and scenic: the
first consisted of athletic exercises, as racing, wrestling, leaping,
and other feats of bodily strength, agility and address. But the
second were for polite accomplishments, or works of genius and
imagination, principally, musical compositions and theatric re-
presentations. The first were taught in the Gymnasium, but
were exhibited in the Stadium. The second were taught in the
Choragium, and on the solemn occasion of a festival were per-
formed in the Theatre or the Odeum. The person at whose ex-
pense the athletic games were performed, was called a Gym-
nasiarch, and he that.'gave the musical games, was called a
Choragus.

" Of these games some are Gymnastic, but those which are
called Scenic may be named likewise Dionysian and musical, &c.
The places of exhibition are, for the first, the Stadium, for the
second, the Theatre." Jul. Poll. Onom. Book III. Chap. 30.

In the greater Dionysia, or festival of Bacchus, which was
celebrated with considerable expenses, a Choragus was appointed
for each tribe.

d It is not our province to attempt to develope the Or-
phic mystery, supposed to be conveyed to the ancients under the
symbolic form of the tripod; nor to discuss the nature of the
institutions of a people who could erect such permanent and
splendid monuments on the occasion of these Choragic festivals;
nor to enquire into the character of the influential office of Chora-
gus, which we find from Plutarch had been filled by those great
men Aristides, Themistocles, and Nicias. It is however incon-
ceivable that so sumptuous a monument in marble which witli the
tripod was nearly forty feet in height should have been raised
merely for the exhibition of that object, unless the edifice itself was
appropriate to some purpose of devotion: we therefore conclude
that this was a species of temple ; such edifices being described
by Pausanias as raised for the support of tripods. The street,
near this ruin, corresponding perhaps with the ancient street of
the tripods, is called Kandela, and a neighbouring church Tanegia
Kandela, from its vicinity to this monument, now usually called
Phanari. The ruin under our consideration appears to have been
undamaged from the time of Stuart and Revett up to the period
of the present Grecian war; but during the occupation of Athens