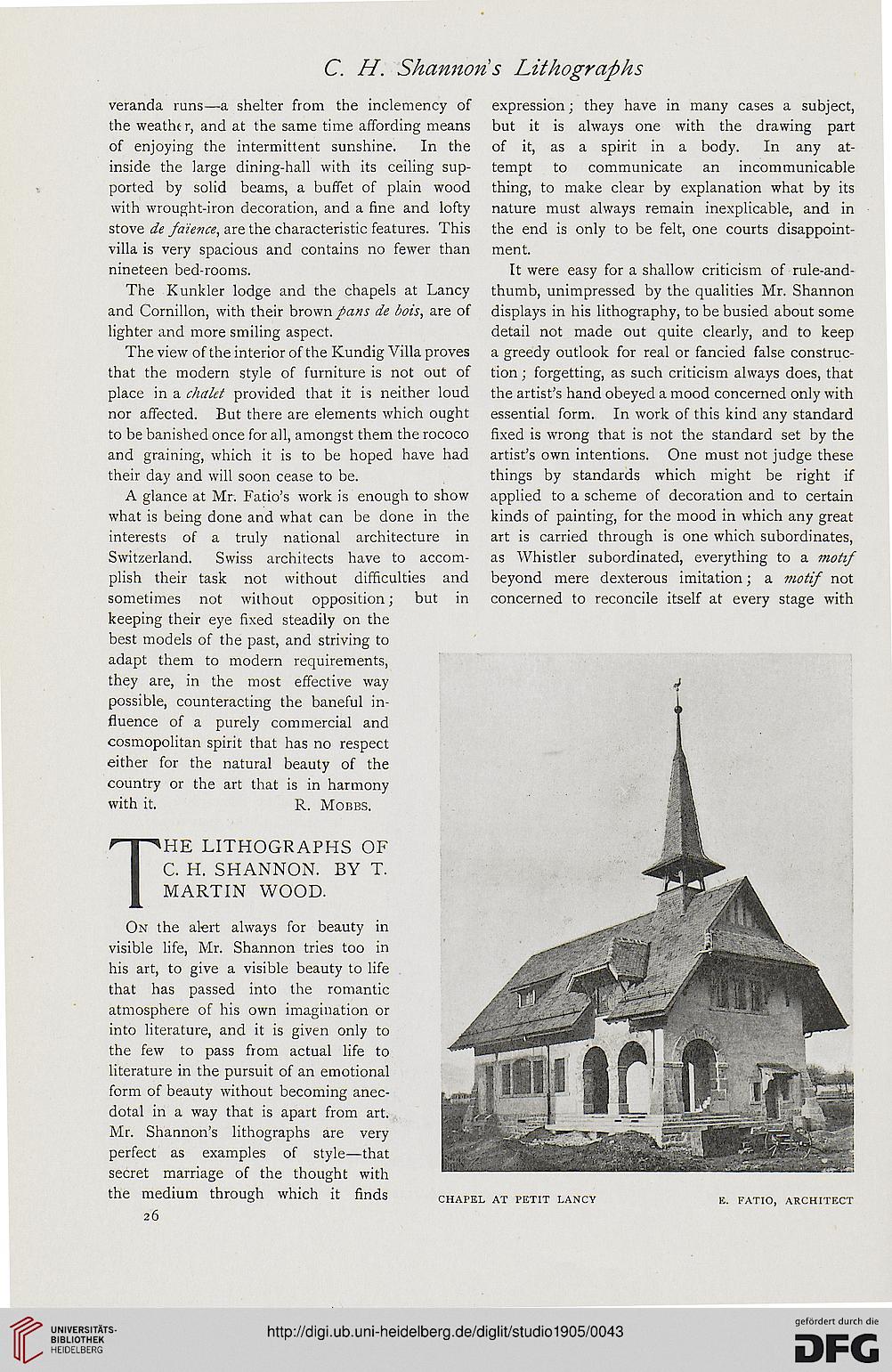 veranda runs—a shelter from the inclemency of expression; they have in many cases a subject,

the weathe r, and at the same time affording means but it is always one with the drawing part

of enjoying the intermittent sunshine. In the of it, as a spirit in a body. In any at-

ported by solid beams, a buffet of plain wood thing, to make clear by explanation what by its

with wrought-iron decoration, and a fine and lofty nature must always remain inexplicable, and in

stove de faience, are the characteristic features. This the end is only to be felt, one courts disappoint-

villa is very spacious and contains no fewer than ment.

nineteen bed-rooms. It were easy for a shallow criticism of rule-and-
The Kunkler lodge and the chapels at Lancy thumb, unimpressed by the qualities Mr. Shannon
and Cornillon, with their brown pans de bois, are of displays in his lithography, to be busied about some
lighter and more smiling aspect. detail not made out quite clearly, and to keep
The view of the interior of the Kundig Villa proves a greedy outlook for real or fancied false construe-
that the modern style of furniture is not out of tion ; forgetting, as such criticism always does, that
place in a chalet provided that it is neither loud the artist's hand obeyed a mood concerned only with
nor affected. But there are elements which ought essential form. In work of this kind any standard
to be banished once for all, amongst them the rococo fixed is wrong that is not the standard set by the
and graining, which it is to be hoped have had artist's own intentions. One must not judge these
their day and will soon cease to be. things by standards which might be right if
A glance at Mr. Fatio's work is enough to show applied to a scheme of decoration and to certain
what is being done and what can be done in the kinds of painting, for the mood in which any great
interests of a truly national architecture in art is carried through is one which subordinates,
Switzerland. Swiss architects have to accom- as Whistler subordinated, everything to a motif
plish their task not without difficulties and beyond mere dexterous imitation; a motif not
sometimes not without opposition; but in concerned to reconcile itself at every stage with
keeping their eye fixed steadily on the
best models of the past, and striving to
adapt them to modern requirements,
they are, in the most effective way
possible, counteracting the baneful in-
fluence of a purely commercial and
cosmopolitan spirit that has no respect
either for the natural beauty of the
country or the art that is in harmony
with it. R. Mobbs.

HE LITHOGRAPHS OF
C. H. SHANNON. BY T.
MARTIN WOOD.

On the alert always for beauty in
visible life, Mr. Shannon tries too in
his art, to give a visible beauty to life
that has passed into the romantic
atmosphere of his own imagination or
into literature, and it is given only to
the few to pass from actual life to
literature in the pursuit of an emotional
form of beauty without becoming anec-
dotal in a way that is apart from art.
Mr. Shannon's lithographs are very
perfect as examples of style—that
secret marriage of the thought with
the medium through which it finds chapel at petit lancy e. fatio, architect