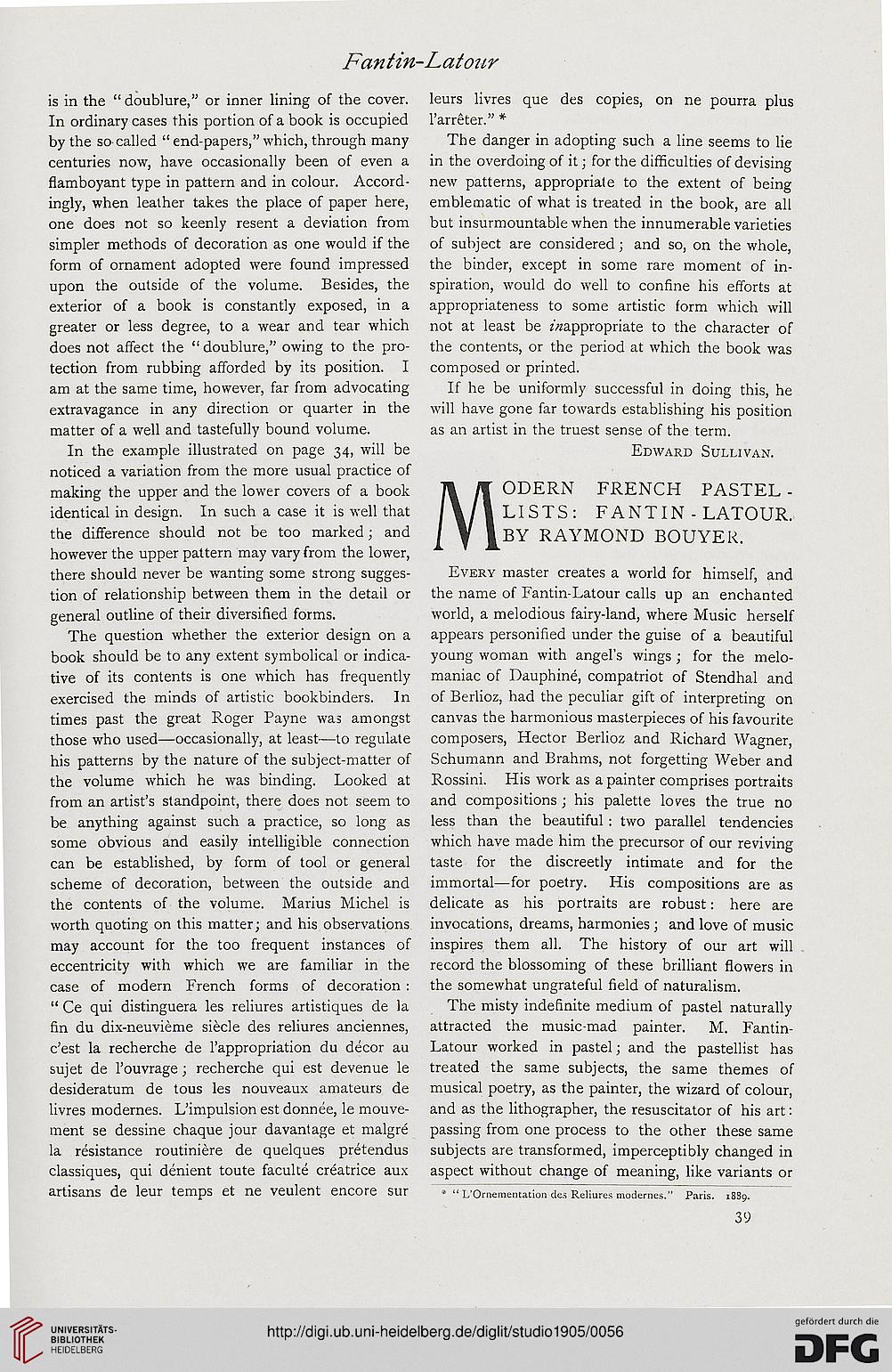 is in the "doublure," or inner lining of the cover.
In ordinary cases this portion of a book is occupied
by the so-called " end-papers," which, through many
centuries now, have occasionally been of even a
flamboyant type in pattern and in colour. Accord-
ingly, when leather takes the place of paper here,
one does not so keenly resent a deviation from
simpler methods of decoration as one would if the
form of ornament adopted were found impressed
upon the outside of the volume. Besides, the
exterior of a book is constantly exposed, in a
greater or less degree, to a wear and tear which
does not affect the " doublure," owing to the pro-
tection from rubbing afforded by its position. I
am at the same time, however, far from advocating
extravagance in any direction or quarter in the
matter of a well and tastefully bound volume.

In the example illustrated on page 34, will be
noticed a variation from the more usual practice of
making the upper and the lower covers of a book
identical in design. In such a case it is well that
the difference should not be too marked; and
however the upper pattern may vary from the lower,
there should never be wanting some strong sugges-
tion of relationship between them in the detail or
general outline of their diversified forms.

The question whether the exterior design on a
book should be to any extent symbolical or indica-
tive of its contents is one which has frequently
exercised the minds of artistic bookbinders. In
times past the great Roger Payne was amongst
those who used—occasionally, at least—to regulate
his patterns by the nature of the subject-matter of
the volume which he was binding. Looked at
from an artist's standpoint, there does not seem to
be anything against such a practice, so long as
some obvious and easily intelligible connection
can be established, by form of tool or general
scheme of decoration, between the outside and
the contents of the volume. Marius Michel is
worth quoting on this matter; and his observations
may account for the too frequent instances of
eccentricity with which we are familiar in the
case of modern French forms of decoration :
" Ce qui distinguera les reliures artistiques de la
fin du dix-neuvieme siecle des reliures anciennes,
c'est la recherche de Fappropriation du decor au
sujet de l'ouvrage ; recherche qui est devenue le
desideratum de tous les nouveaux amateurs de
livres modernes. L'impulsion est donnee, le mouve-
ment se dessine chaque jour davantage et malgre
la resistance routiniere de quelques pretendus
classiques, qui denient toute faculte creatrice aux
artisans de leur temps et ne veulent encore sur

The danger in adopting such a line seems to lie
in the overdoing of it; for the difficulties of devising
new patterns, appropriate to the extent of being
emblematic of what is treated in the book, are all
but insurmountable when the innumerable varieties
of subject are considered; and so, on the whole,
the binder, except in some rare moment of in-
spiration, would do well to confine his efforts at
appropriateness to some artistic form which will
not at least be ^appropriate to the character of
the contents, or the period at which the book was
composed or printed.

If he be uniformly successful in doing this, he
will have gone far towards establishing his position
as an artist in the truest sense of the term.

Every master creates a world for himself, and
the name of Fantin-Latour calls up an enchanted
world, a melodious fairy-land, where Music herself
appears personified under the guise of a beautiful
young woman with angel's wings ; for the melo-
maniac of Dauphine, compatriot of Stendhal and
of Berlioz, had the peculiar gift of interpreting on
canvas the harmonious masterpieces of his favourite
composers, Hector Berlioz and Richard Wagner,
Schumann and Brahms, not forgetting Weber and
Rossini. His work as a painter comprises portraits
and compositions ; his palette loves the true no
less than the beautiful : two parallel tendencies
which have made him the precursor of our reviving
taste for the discreetly intimate and for the
immortal—for poetry. His compositions are as
delicate as his portraits are robust: here are
invocations, dreams, harmonies ; and love of music
inspires them all. The history of our art will
record the blossoming of these brilliant flowers in
the somewhat ungrateful field of naturalism.

The misty indefinite medium of pastel naturally
attracted the music-mad painter. M. Fantin-
Latour worked in pastel; and the pastellist has
treated the same subjects, the same themes of
musical poetry, as the painter, the wizard of colour,
and as the lithographer, the resuscitator of his art:
passing from one process to the other these same
subjects are transformed, imperceptibly changed in
aspect without change of meaning, like variants or