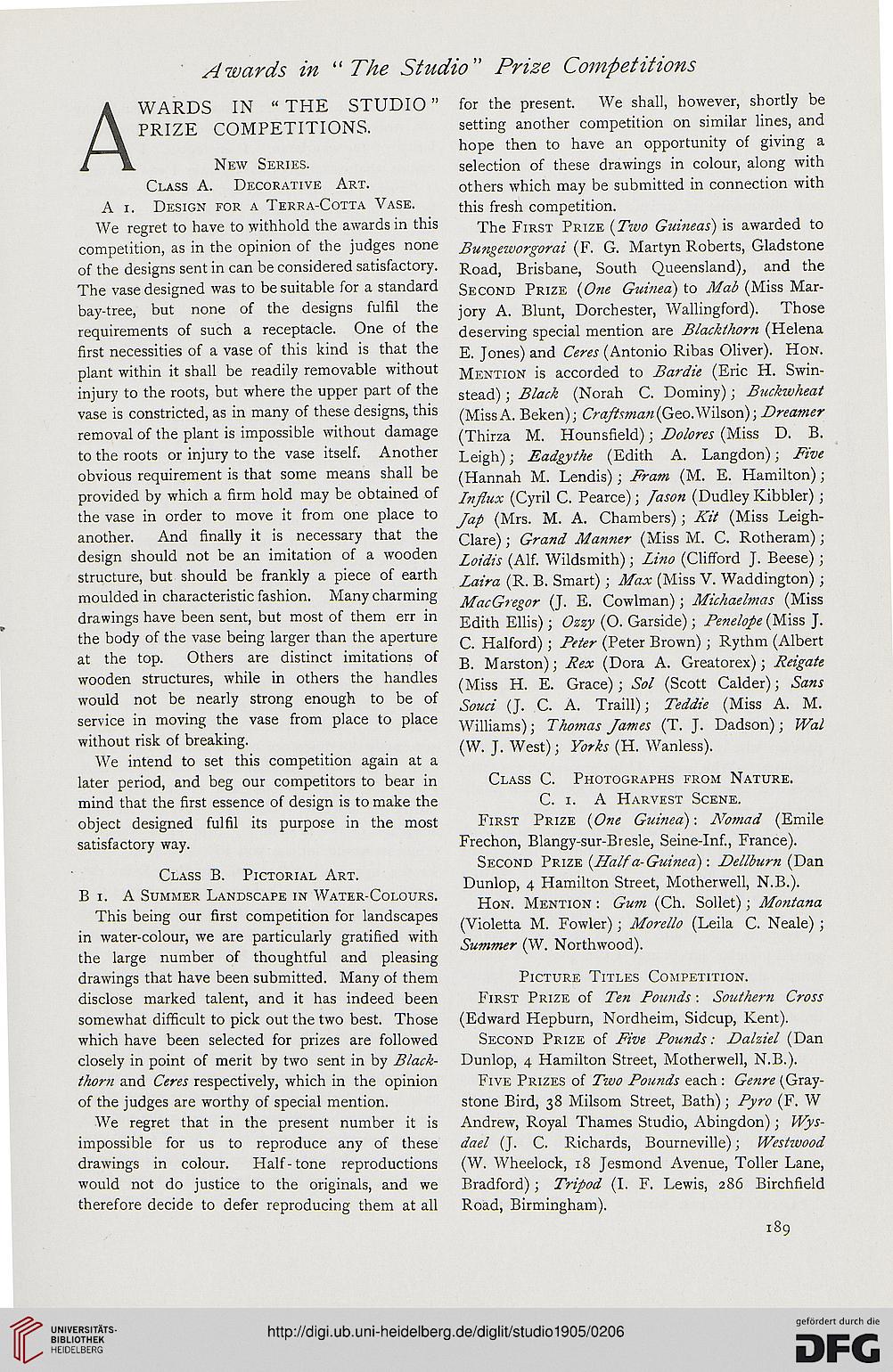 AWARDS IN " THE STUDIO" for the present. We shall, however, shortly be

PRIZE COMPETITIONS. setting another competition on similar lines, and
hope then to have an opportunity of giving a

New Series. selection of these drawings in colour, along with

Class A. Decorative Art. others which may be submitted in connection with

A i. Design for a Terra-Cotta Vase. this fresh competition.

We regret to have to withhold the awards in this -phe First Prize {Two Guineas) is awarded to
competition, as in the opinion of the judges none Bungeworgorai (F G. Martyn Roberts, Gladstone
of the designs sent in can be considered satisfactory. Road, Brisbane, South Queensland), and the
The vase designed was to be suitable for a standard Second Prize {One Guinea) to Mab (Miss Mar-
bay-tree, but none of the designs fulfil the jory A B]unt) Dorchester, Wallingford). Those
requirements of such a receptacle. One of the deserving special mention are Blackthorn (Helena
first necessities of a vase of this kind is that the E. Jones) and Ceres (Antonio Ribas Oliver). Hon.
plant within it shall be readily removable without Mention is accorded to Bardie (Eric H. Swin-
injury to the roots, but where the upper part of the stead) . Biack (Norah C. Dominy); Buckwheat
vase is constricted, as in many of these designs, this (Miss A. Beken); Craftsman{Geo.Wlson); Dreamer
removal of the plant is impossible without damage (Thjrza m. Hounsfield); Dolores (Miss D. B.
to the roots or injury to the vase itself. Another Leigh); Eadgythe (Edith A. Langdon); Five
obvious requirement is that some means shall be (Hannah M. Lendis) ; From (M. E. Hamilton);
provided by which a firm hold may be obtained of InJ?ux (cyril q pearce); Jason (Dudley Kibbler);
the vase in order to move it from one place to jap (mrs. m. A. Chambers) ; Kit (Miss Leigh-
another. And finally it is necessary that the Clare) . Grand Manner (Miss M. C. Rotheram);
design should not be an imitation of a wooden LoMis (Alf_ wildsmith). Lino (Clifford J. Beese) j
structure, but should be frankly a piece of earth Lajra (R> B Smart) . Max (Miss v Waddington) .
moulded in characteristic fashion. Many charming MacGregor (j. E. Cowlman); Michaelmas (Miss
drawings have been sent, but most of them err in Edjth Enis) . Qzzy (0 Garside). Penei0pe {Wxss J.
the body of the vase being larger than the aperture Q Halford) . Peter (Peter Brown) . Rythm (Albert
at the top. Others are distinct mutations of R Marston); Rex (Dora A. Greatorex); Reigate
wooden structures, while in others the handles (Miss H £ Grace) . ^ (gcott Calder) ^
would not be nearly strong enough to be of w (J< Q A Train). TeMe (Migs A M_
service in moving the vase from place to place wmiams). Thomas James (T. j. Dadson); Wal
without risk of breaking. _ _ . (w_ j Wegt) ^ Wanless).

We intend to set this competition again at a
later period, and beg our competitors to bear in Class C. Photographs from Nature.

mind that the first essence of design is to make the C. i. A Harvest Scene.

object designed fulfil its purpose in the most First Prize {One Guinea): ATomad (Emile

This being our first competition for landscapes M_ Fowler) c_ NeaJ

in water-colour, we are particularly gratified with Summer (W Northwood)
the large number of thoughtful and pleasing

drawings that have been submitted. Many of them Picture Titles Competition.

disclose marked talent, and it has indeed been First Prize of Ten Pounds : Southern Cross

somewhat difficult to pick out the two best. Those (Edward Hepburn, Nordheim, Sidcup, Kent),
which have been selected for prizes are followed Second Prize of Five Pounds: Dalziel (Dan

closely in point of merit by two sent in by Black- Dunlop, 4 Hamilton Street, Motherwell, N.B.).
thorn and Ceres respectively, which in the opinion Five Prizes of Two Pounds each : Genre (Gray-

We regret that in the present number it is Andrew, Royal Thames Studio, Abingdon); Wys-

impossible for us to reproduce any of these dael (J. C. Richards, Bourneville); Westwood

would not do justice to the originals, and we Bradford); Tripod (I. F. Lewis, 286 Birchfield

therefore decide to defer reproducing them at all Road, Birmingham).