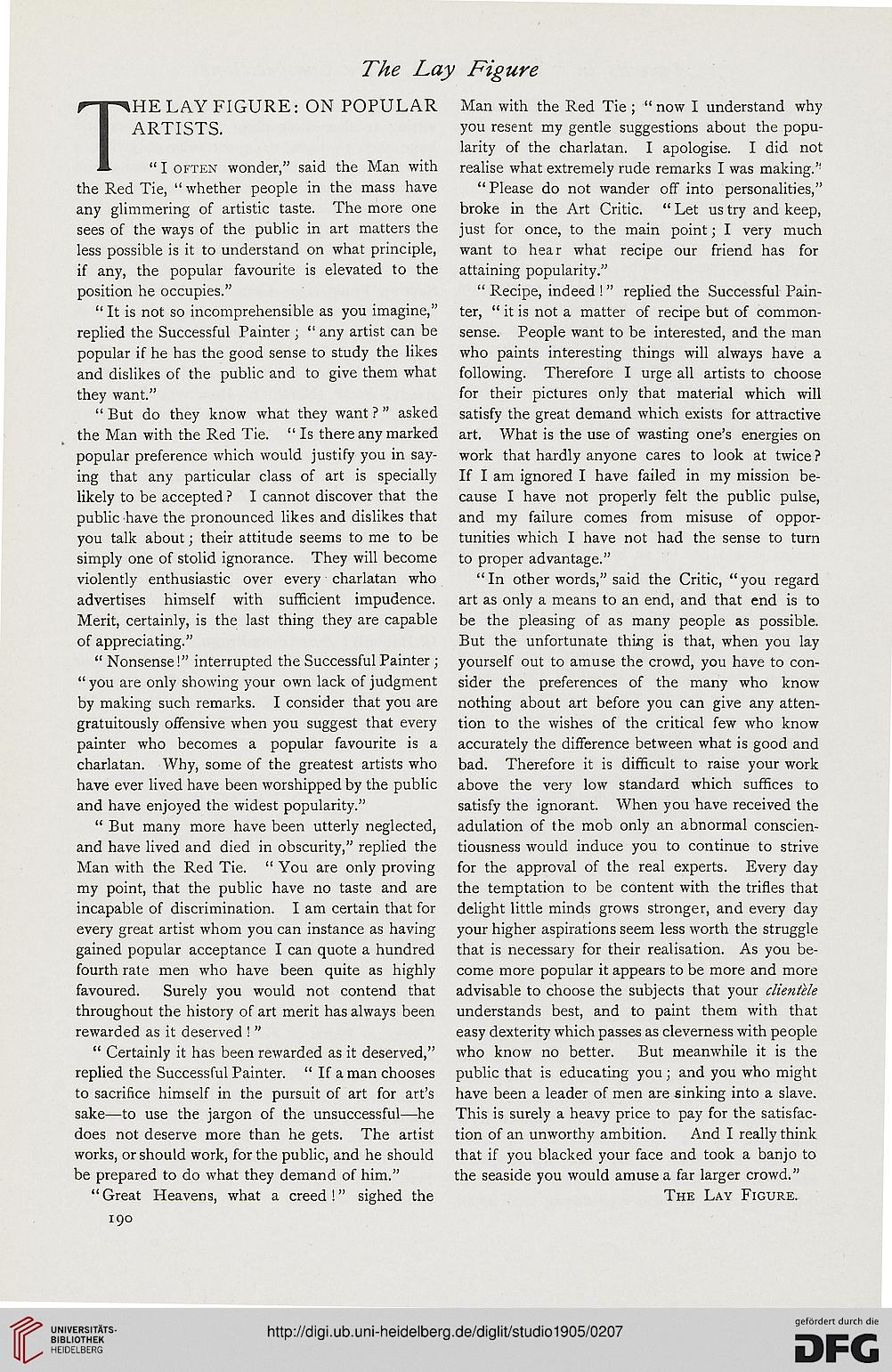 THE LAY FIGURE: ON POPULAR
ARTISTS.
" I often wonder," said the Man with
the Red Tie, " whether people in the mass have
any glimmering of artistic taste. The more one
sees of the ways of the public in art matters the
less possible is it to understand on what principle,
if any, the popular favourite is elevated to the
position he occupies."

" It is not so incomprehensible as you imagine,"
replied the Successful Painter ; " any artist can be
popular if he has the good sense to study the likes
and dislikes of the public and to give them what
they want."

" But do they know what they want ? " asked
the Man with the Red Tie. " Is there any marked
popular preference which would justify you in say-
ing that any particular class of art is specially
likely to be accepted ? I cannot discover that the
public have the pronounced likes and dislikes that
you talk about; their attitude seems to me to be
simply one of stolid ignorance. They will become
violently enthusiastic over every charlatan who
advertises himself with sufficient impudence.
Merit, certainly, is the last thing they are capable
of appreciating."

" Nonsense!" interrupted the Successful Painter ;
" you are only showing your own lack of judgment
by making such remarks. I consider that you are
gratuitously offensive when you suggest that every
painter who becomes a popular favourite is a
charlatan. Why, some of the greatest artists who
have ever lived have been worshipped by the public
and have enjoyed the widest popularity."

" But many more have been utterly neglected,
and have lived and died in obscurity," replied the
Man with the Red Tie. " You are only proving
my point, that the public have no taste and are
incapable of discrimination. I am certain that for
every great artist whom you can instance as having
gained popular acceptance I can quote a hundred
fourth rate men who have been quite as highly
favoured. Surely you would not contend that
throughout the history of art merit has always been
rewarded as it deserved ! "

" Certainly it has been rewarded as it deserved,"
replied the Successful Painter. " If a man chooses
to sacrifice himself in the pursuit of art for art's
sake—to use the jargon of the unsuccessful—he
does not deserve more than he gets. The artist
works, or should work, for the public, and he should
be prepared to do what they demand of him."

Man with the Red Tie ; " now I understand why
you resent my gentle suggestions about the popu-
larity of the charlatan. I apologise. I did not
realise what extremely rude remarks I was making.'^

" Please do not wander off into personalities,"
broke in the Art Critic. " Let us try and keep,
just for once, to the main point; I very much
want to hear what recipe our friend has for
attaining popularity."

" Recipe, indeed ! " replied the Successful Pain-
ter, " it is not a matter of recipe but of common-
sense. People want to be interested, and the man
who paints interesting things will always have a
following. Therefore I urge all artists to choose
for their pictures only that material which will
satisfy the great demand which exists for attractive
art. What is the use of wasting one's energies on
work that hardly anyone cares to look at twice ?
If I am ignored I have failed in my mission be-
cause I have not properly felt the public pulse,
and my failure comes from misuse of oppor-
tunities which I have not had the sense to turn
to proper advantage."

"In other words," said the Critic, "you regard
art as only a means to an end, and that end is to
be the pleasing of as many people as possible.
But the unfortunate thing is that, when you lay
yourself out to amuse the crowd, you have to con-
sider the preferences of the many who know
nothing about art before you can give any atten-
tion to the wishes of the critical few who know
accurately the difference between what is good and
bad. Therefore it is difficult to raise your work
above the very low standard which suffices to
satisfy the ignorant. When you have received the
adulation of the mob only an abnormal conscien-
tiousness would induce you to continue to strive
for the approval of the real experts. Every day
the temptation to be content with the trifles that
delight little minds grows stronger, and every day
your higher aspirations seem less worth the struggle
that is necessary for their realisation. As you be-
come more popular it appears to be more and more
advisable to choose the subjects that your clientele
understands best, and to paint them with that
easy dexterity which passes as cleverness with people
who know no better. But meanwhile it is the
public that is educating you; and you who might
have been a leader of men are sinking into a slave.
This is surely a heavy price to pay for the satisfac-
tion of an unworthy ambition. And I really think
that if you blacked your face and took a banjo to
the seaside you would amuse a far larger crowd."