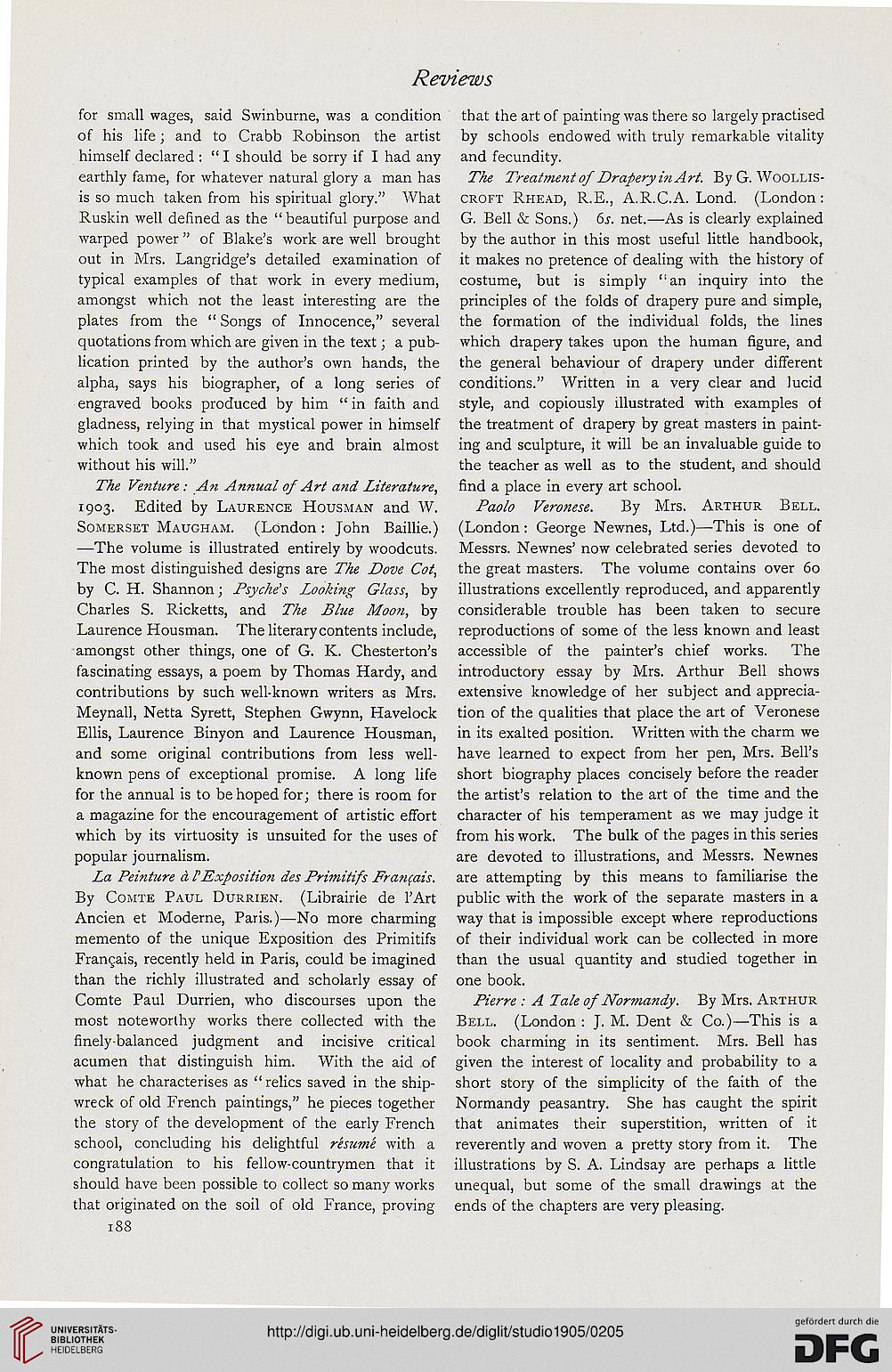 for small wages, said Swinburne, was a condition
of his life; and to Crabb Robinson the artist
himself declared : " I should be sorry if I had any
earthly fame, for whatever natural glory a man has
is so much taken from his spiritual glory." What
Ruskin well defined as the " beautiful purpose and
warped power " of Blake's work are well brought
out in Mrs. Langridge's detailed examination of
typical examples of that work in every medium,
amongst which not the least interesting are the
plates from the " Songs of Innocence," several
quotations from which are given in the text; a pub-
lication printed by the author's own hands, the
alpha, says his biographer, of a long series of
engraved books produced by him " in faith and
gladness, relying in that mystical power in himself
which took and used his eye and brain almost
without his will."

The Venture: An Annual of Art and Literature,
1903. Edited by Laurence Housman and W.
Somerset Maugham. (London : John Baillie.)
—The volume is illustrated entirely by woodcuts.
The most distinguished designs are The Dove Cot,
by C. H. Shannon; Psyche's Looking Glass, by
Charles S. Ricketts, and The Blue Moon, by
Laurence Housman. The literary contents include,
amongst other things, one of G. K. Chesterton's
fascinating essays, a poem by Thomas Hardy, and
contributions by such well-known writers as Mrs.
Meynall, Netta Syrett, Stephen Gwynn, Havelock
Ellis, Laurence Binyon and Laurence Housman,
and some original contributions from less well-
known pens of exceptional promise. A long life
for the annual is to be hoped for; there is room for
a magazine for the encouragement of artistic effort
which by its virtuosity is unsuited for the uses of
popular journalism.

La Peinture a VExposition des Pri?nitifs Fran^ais.
By Comte Paul Durrien. (Librairie de l'Art
Ancien et Moderne, Paris.)—No more charming
memento of the unique Exposition des Primitifs
Francais, recently held in Paris, could be imagined
than the richly illustrated and scholarly essay of
Comte Paul Durrien, who discourses upon the
most noteworthy works there collected with the
finely-balanced judgment and incisive critical
acumen that distinguish him. With the aid of
what he characterises as "relics saved in the ship-
wreck of old French paintings," he pieces together
the story of the development of the early French
school, concluding his delightful resume with a
congratulation to his fellow-countrymen that it
should have been possible to collect so many works
that originated on the soil of old France, proving
188

that the art of painting was there so largely practised
by schools endowed with truly remarkable vitality
and fecundity.

The Treatment of Drapery in Art. By G. Woollis-
croft Rhead, R.E., A.R.C.A. Lond. (London:
G. Bell & Sons.) 6s. net.—As is clearly explained
by the author in this most useful little handbook,
it makes no pretence of dealing with the history of
costume, but is simply ''an inquiry into the
principles of the folds of drapery pure and simple,
the formation of the individual folds, the lines
which drapery takes upon the human figure, and
the general behaviour of drapery under different
conditions." Written in a very clear and lucid
style, and copiously illustrated with examples of
the treatment of drapery by great masters in paint-
ing and sculpture, it will be an invaluable guide to
the teacher as well as to the student, and should
find a place in every art school.

Paolo Veronese. By Mrs. Arthur Bell.
(London: George Newnes, Ltd.)—This is one of
Messrs. Newnes' now celebrated series devoted to
the great masters. The volume contains over 60
illustrations excellently reproduced, and apparently
considerable trouble has been taken to secure
reproductions of some of the less known and least
accessible of the painter's chief works. The
introductory essay by Mrs. Arthur Bell shows
extensive knowledge of her subject and apprecia-
tion of the qualities that place the art of Veronese
in its exalted position. Written with the charm we
have learned to expect from her pen, Mrs. Bell's
short biography places concisely before the reader
the artist's relation to the art of the time and the
character of his temperament as we may judge it
from his work. The bulk of the pages in this series
are devoted to illustrations, and Messrs. Newnes
are attempting by this means to familiarise the
public with the work of the separate masters in a
way that is impossible except where reproductions
of their individual work can be collected in more
than the usual quantity and studied together in
one book.

Pierre : A Tale of Normandy. By Mrs. Arthur
Bell. (London : j. M. Dent & Co.)—This is a
book charming in its sentiment. Mrs. Bell has
given the interest of locality and probability to a
short story of the simplicity of the faith of the
Normandy peasantry. She has caught the spirit
that animates their superstition, written of it
reverently and woven a pretty story from it. The
illustrations by S. A. Lindsay are perhaps a little
unequal, but some of the small drawings at the
ends of the chapters are very pleasing.