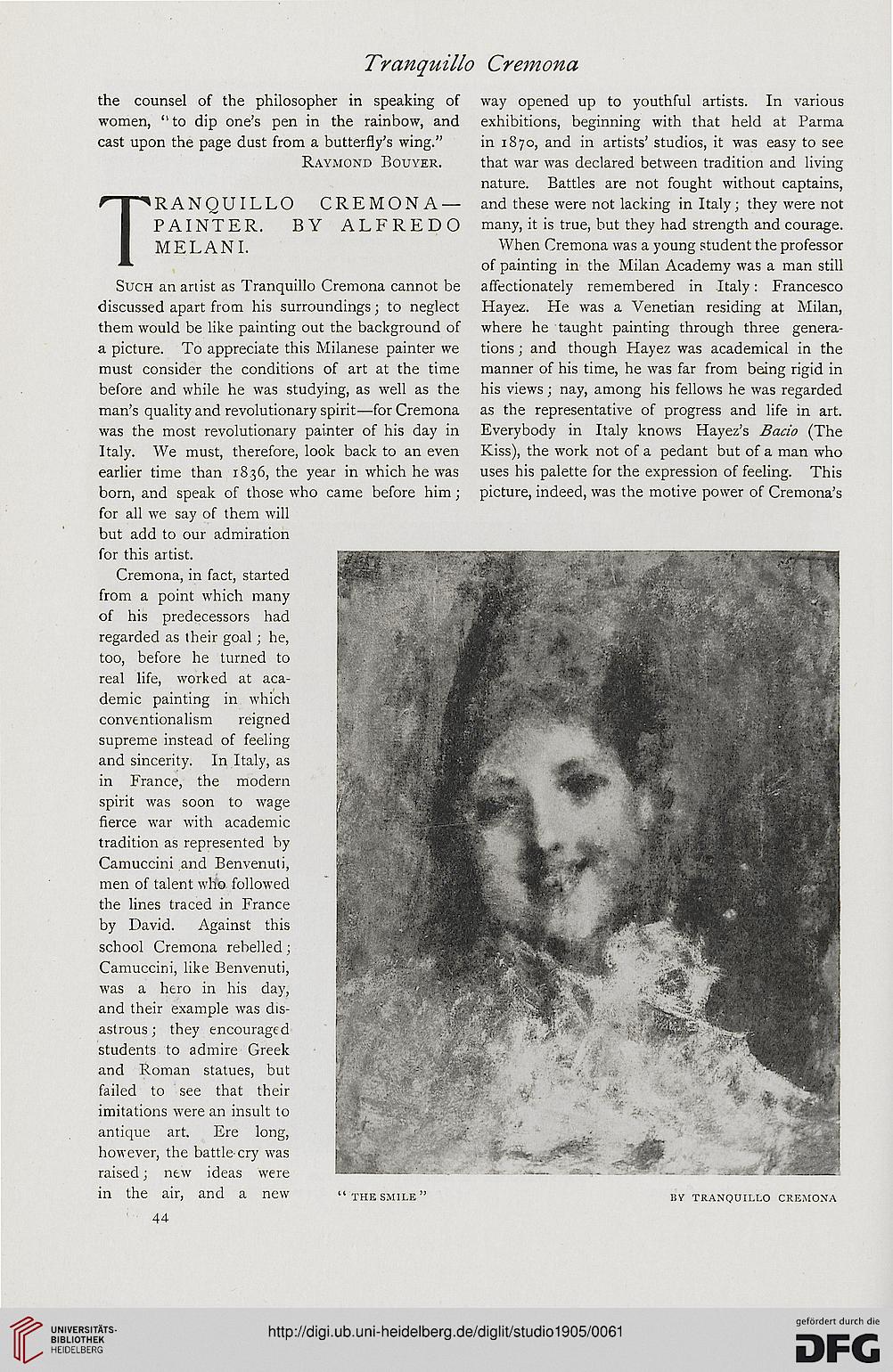 the counsel of the philosopher in speaking of way opened up to youthful artists. In various
women, "to dip one's pen in the rainbow, and exhibitions, beginning with that held at Parma
cast upon the page dust from a butterfly's wing." in 1870, and in artists' studios, it was easy to see

Raymond Bouyer. that war was declared between tradition and living
nature. Battles are not fought without captains,

TRANQUILLO CREMONA-— and these were not lacking in Italy; they were not
PAINTER. BY ALFREDO many, it is true, but they had strength and courage.
MELANI. When Cremona was a young student the professor

of painting in the Milan Academy was a man still
Such an artist as Tranquillo Cremona cannot be affectionately remembered in Italy : Francesco
discussed apart from his surroundings; to neglect Hayez. He was a Venetian residing at Milan,
them would be like painting out the background of where he taught painting through three genera-
a picture. To appreciate this Milanese painter we tions; and though Hayez was academical in the
must consider the conditions of art at the time manner of his time, he was far from being rigid in
before and while he was studying, as well as the his views; nay, among his fellows he was regarded
man's quality and revolutionary spirit—for Cremona as the representative of progress and life in art.
was the most revolutionary painter of his day in Everybody in Italy knows Hayez's Bacio (The
Italy. We must, therefore, look back to an even Kiss), the work not of a pedant but of a man who
earlier time than 18.36, the year in which he was uses his palette for the expression of feeling. This
born, and speak of those who came before him ; picture, indeed, was the motive povver of Cremona's
for all we say of them will
but add to our admiration
for this artist.

Cremona, in fact, started
from a point which many
of his predecessors had
regarded as their goal; he,
too, before he turned to
real life, worked at aca-
demic painting in which
conventionalism reigned
supreme instead of feeling
and sincerity. In Italy, as
in France, the modern
spirit was soon to wage
fierce war with academic
tradition as represented by
Camuccini and Benvenuti,
men of talent who followed
the lines traced in France
by David. Against this
school Cremona rebelled;
Camuccini, like Benvenuti,
was a hero in his day,
and their example was dis-
astrous ; they encouraged
students to admire Greek
and Roman statues, but
failed to see that their
imitations were an insult to
antique art. Ere long,
however, the battle cry was
raised; new ideas were
in the air, and a new "the smile" by tranquillo cremona