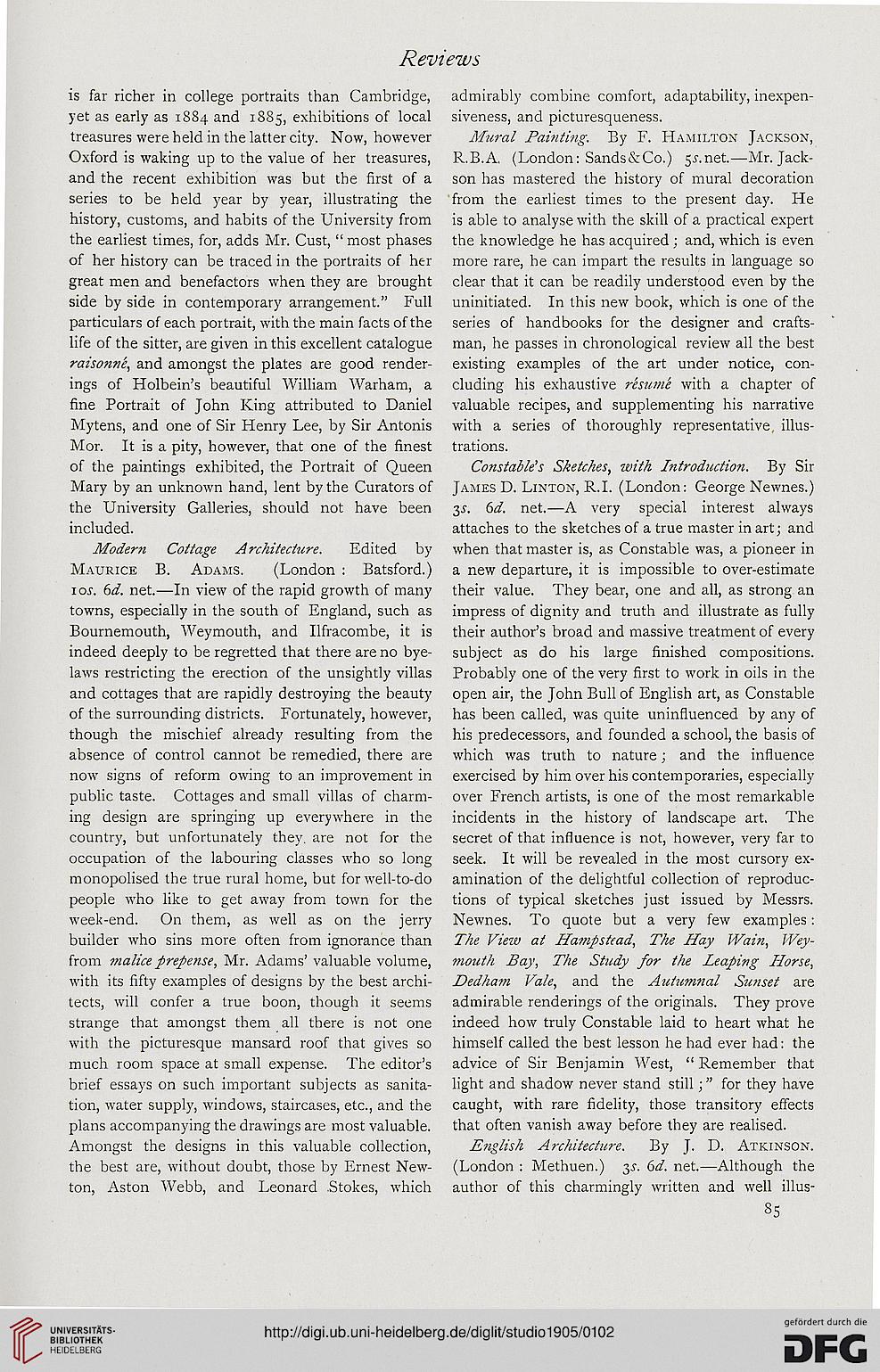 is far richer in college portraits than Cambridge,
yet as early as 1884 and 1885, exhibitions of local
treasures were held in the latter city. Now, however
Oxford is waking up to the value of her treasures,
and the recent exhibition was but the first of a
series to be held year by year, illustrating the
history, customs, and habits of the University from
the earliest times, for, adds Mr. Cust, " most phases
of her history can be traced in the portraits of her
great men and benefactors when they are brought
side by side in contemporary arrangement." Full
particulars of each portrait, with the main facts of the
life of the sitter, are given in this excellent catalogue
raisonne, and amongst the plates are good render-
ings of Holbein's beautiful William Warham, a
fine Portrait of John King attributed to Daniel
Mytens, and one of Sir Henry Lee, by Sir Antonis
Mor. It is a pity, however, that one of the finest
of the paintings exhibited, the Portrait of Queen
Mary by an unknown hand, lent by the Curators of
the University Galleries, should not have been
included.

Modern Cottage Architecture. Edited by
Maurice B. Adams. (London : Batsford.)
105. 6d. net.—In view of the rapid growth of many
towns, especially in the south of England, such as
Bournemouth, Weymouth, and Ilfracombe, it is
indeed deeply to be regretted that there are no bye-
laws restricting the erection of the unsightly villas
and cottages that are rapidly destroying the beauty
of the surrounding districts. Fortunately, however,
though the mischief already resulting from the
absence of control cannot be remedied, there are
now signs of reform owing to an improvement in
public taste. Cottages and small villas of charm-
ing design are springing up everywhere in the
country, but unfortunately they, are not for the
occupation of the labouring classes who so long
monopolised the true rural home, but for well-to-do
people who like to get away from town for the
week-end. On them, as well as on the jerry
builder who sins more often from ignorance than
from malice prepense, Mr. Adams' valuable volume,
with its fifty examples of designs by the best archi-
tects, will confer a true boon, though it seems
strange that amongst them all there is not one
with the picturesque mansard roof that gives so
much room space at small expense. The editor's
brief essays on such important subjects as sanita-
tion, water supply, windows, staircases, etc., and the
plans accompanying the drawings are most valuable.
Amongst the designs in this valuable collection,
the best are, without doubt, those by Ernest New-
ton, Aston Webb, and Leonard .Stokes, which

Mural Painting. By F. Hamilton Jackson,
R.B.A. (London: Sands&Co.) 5s.net.—Mr. Jack-
son has mastered the history of mural decoration
from the earliest times to the present day. He
is able to analyse with the skill of a practical expert
the knowledge he has acquired ; and, which is even
more rare, he can impart the results in language so
clear that it can be readily understood even by the
uninitiated. In this new book, which is one of the
series of handbooks for the designer and crafts-
man, he passes in chronological review all the best
existing examples of the art under notice, con-
cluding his exhaustive resume with a chapter of
valuable recipes, and supplementing his narrative
with a series of thoroughly representative, illus-
trations.

Constable's Sketches, with Introduction. By Sir
James D. Linton, R.I. (London: George Newnes.)
3J. 6d. net.—A very special interest always
attaches to the sketches of a true master in art; and
when that master is, as Constable was, a pioneer in
a new departure, it is impossible to over-estimate
their value. They bear, one and all, as strong an
impress of dignity and truth and illustrate as fully
their author's broad and massive treatment of every
subject as do his large finished compositions.
Probably one of the very first to work in oils in the
open air, the John Bull of English art, as Constable
has been called, was quite uninfluenced by any of
his predecessors, and founded a school, the basis of
which was truth to nature; and the influence
exercised by him over his contemporaries, especially
over French artists, is one of the most remarkable
incidents in the history of landscape art. The
secret of that influence is not, however, very far to
seek. It will be revealed in the most cursory ex-
amination of the delightful collection of reproduc-
tions of typical sketches just issued by Messrs.
Newnes. To quote but a very few examples:
The View at Hampstead, The Hay Wain, Wey-
mouth Bay, The Study for the Leaping Horse,
Dedham Vale, and the Autumnal Sunset are
admirable renderings of the originals. They prove
indeed how truly Constable laid to heart what he
himself called the best lesson he had ever had: the
advice of Sir Benjamin West, " Remember that
light and shadow never stand still;" for they have
caught, with rare fidelity, those transitory effects
that often vanish away before they are realised.