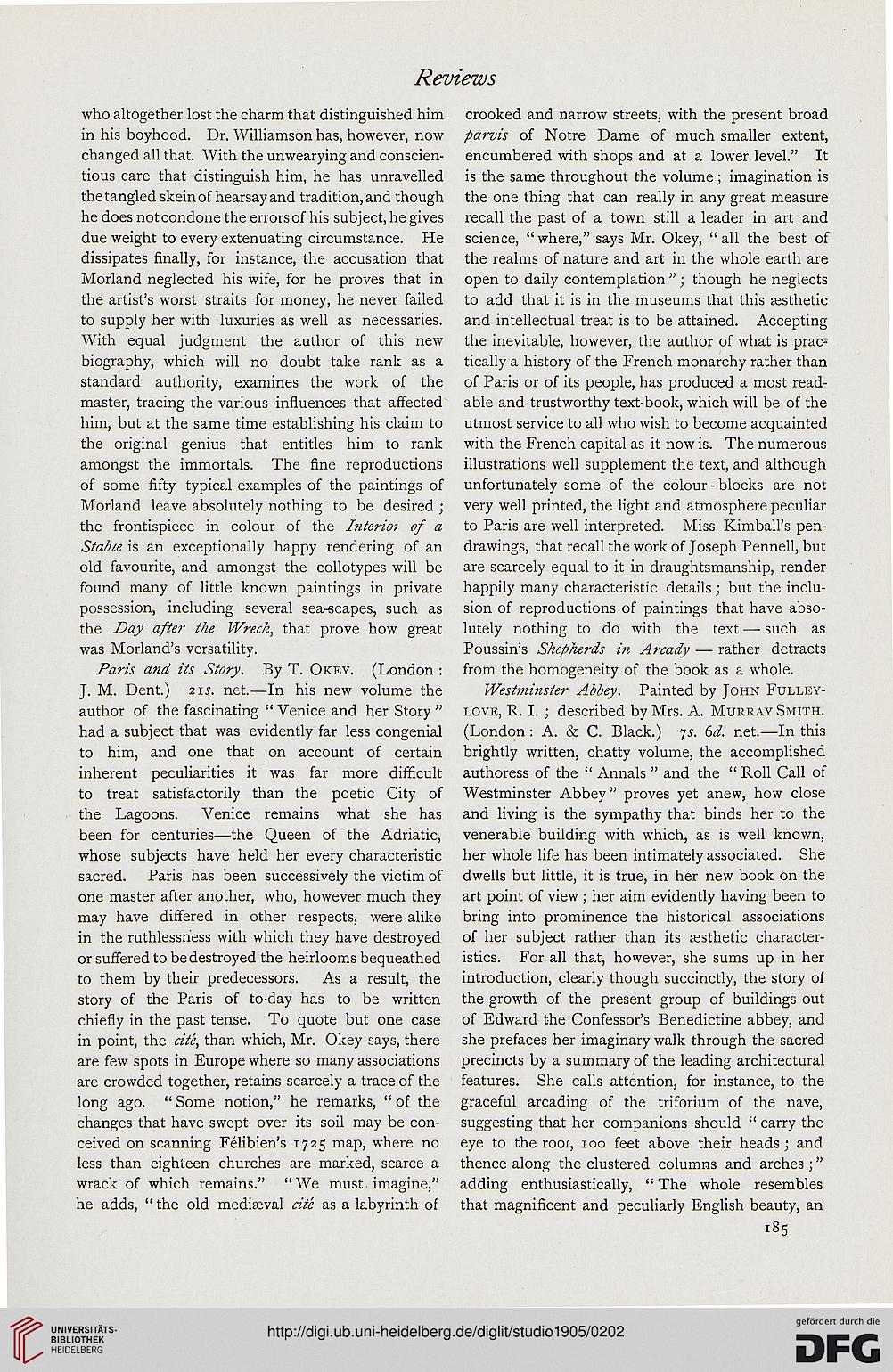 who altogether lost the charm that distinguished him
in his boyhood. Dr. Williamson has, however, now
changed all that. With the unwearying and conscien-
tious care that distinguish him, he has unravelled
the tangled skein of hearsay and tradition, and though
he does not condone the errors of his subject, he gives
due weight to every extenuating circumstance. He
dissipates finally, for instance, the accusation that
Morland neglected his wife, for he proves that in
the artist's worst straits for money, he never failed
to supply her with luxuries as well as necessaries.
With equal judgment the author of this new
biography, which will no doubt take rank as a
standard authority, examines the work of the
master, tracing the various influences that affected
him, but at the same time establishing his claim to
the original genius that entitles him to rank
amongst the immortals. The fine reproductions
of some fifty typical examples of the paintings of
Morland leave absolutely nothing to be desired ;
the frontispiece in colour of the Interioi of a
Stable is an exceptionally happy rendering of an
old favourite, and amongst the collotypes will be
found many of little known paintings in private
possession, including several sea-scapes, such as
the Day after the Wreck, that prove how great
was Morland's versatility.

Paris and its Story. By T. Okey. (London :
J. M. Dent.) 2is. net.—In his new volume the
author of the fascinating " Venice and her Story "
had a subject that was evidently far less congenial
to him, and one that on account of certain
inherent peculiarities it was far more difficult
to treat satisfactorily than the poetic City of
the Lagoons. Venice remains what she has
been for centuries—the Queen of the Adriatic,
whose subjects have held her every characteristic
sacred. Paris has been successively the victim of
one master after another, who, however much they
may have differed in other respects, were alike
in the ruthlessriess with which they have destroyed
or suffered to bedestroyed the heirlooms bequeathed
to them by their predecessors. As a result, the
story of the Paris of to-day has to be written
chiefly in the past tense. To quote but one case
in point, the cite, than which, Mr. Okey says, there
are few spots in Europe where so many associations
are crowded together, retains scarcely a trace of the
long ago. "Some notion," he remarks, "of the
changes that have swept over its soil may be con-
ceived on scanning Felibien's 1725 map, where no
less than eighteen churches are marked, scarce a
wrack of which remains." " We must imagine,"
he adds, " the old mediteval cite as a labyrinth of

crooked and narrow streets, with the present broad
parvis of Notre Dame of much smaller extent,
encumbered with shops and at a lower level." It
is the same throughout the volume; imagination is
the one thing that can really in any great measure
recall the past of a town still a leader in art and
science, " where," says Mr. Okey, " all the best of
the realms of nature and art in the whole earth are
open to daily contemplation " ; though he neglects
to add that it is in the museums that this aesthetic
and intellectual treat is to be attained. Accepting
the inevitable, however, the author of what is prac-
tically a history of the French monarchy rather than
of Paris or of its people, has produced a most read-
able and trustworthy text-book, which will be of the
utmost service to all who wish to become acquainted
with the French capital as it now is. The numerous
illustrations well supplement the text, and although
unfortunately some of the colour - blocks are not
very well printed, the light and atmosphere peculiar
to Paris are well interpreted. Miss Kimball's pen-
drawings, that recall the work of Joseph Pennell, but
are scarcely equal to it in draughtsmanship, render
happily many characteristic details ; but the inclu-
sion of reproductions of paintings that have abso-
lutely nothing to do with the text — such as
Poussin's Shepherds in Arcady — rather detracts
from the homogeneity of the book as a whole.

Westminster Abbey. Painted by John Fulley-
love, R. I. ; described by Mrs. A. Murray Smith.
(London : A. & C. Black.) 7^. 6d. net.—In this
brightly written, chatty volume, the accomplished
authoress of the " Annals " and the " Roll Call of
Westminster Abbey" proves yet anew, how close
and living is the sympathy that binds her to the
venerable building with which, as is well known,
her whole life has been intimately associated. She
dwells but little, it is true, in her new book on the
art point of view ; her aim evidently having been to
bring into prominence the historical associations
of her subject rather than its aesthetic character-
istics. For all that, however, she sums up in her
introduction, clearly though succinctly, the story of
the growth of the present group of buildings out
of Edward the Confessor's Benedictine abbey, and
she prefaces her imaginary walk through the sacred
precincts by a summary of the leading architectural
features. She calls attention, for instance, to the
graceful arcading of the triforium of the nave,
suggesting that her companions should " carry the
eye to the root, 100 feet above their heads ; and
thence along the clustered columns and arches ;"
adding enthusiastically, " The whole resembles
that magnificent and peculiarly English beauty, an