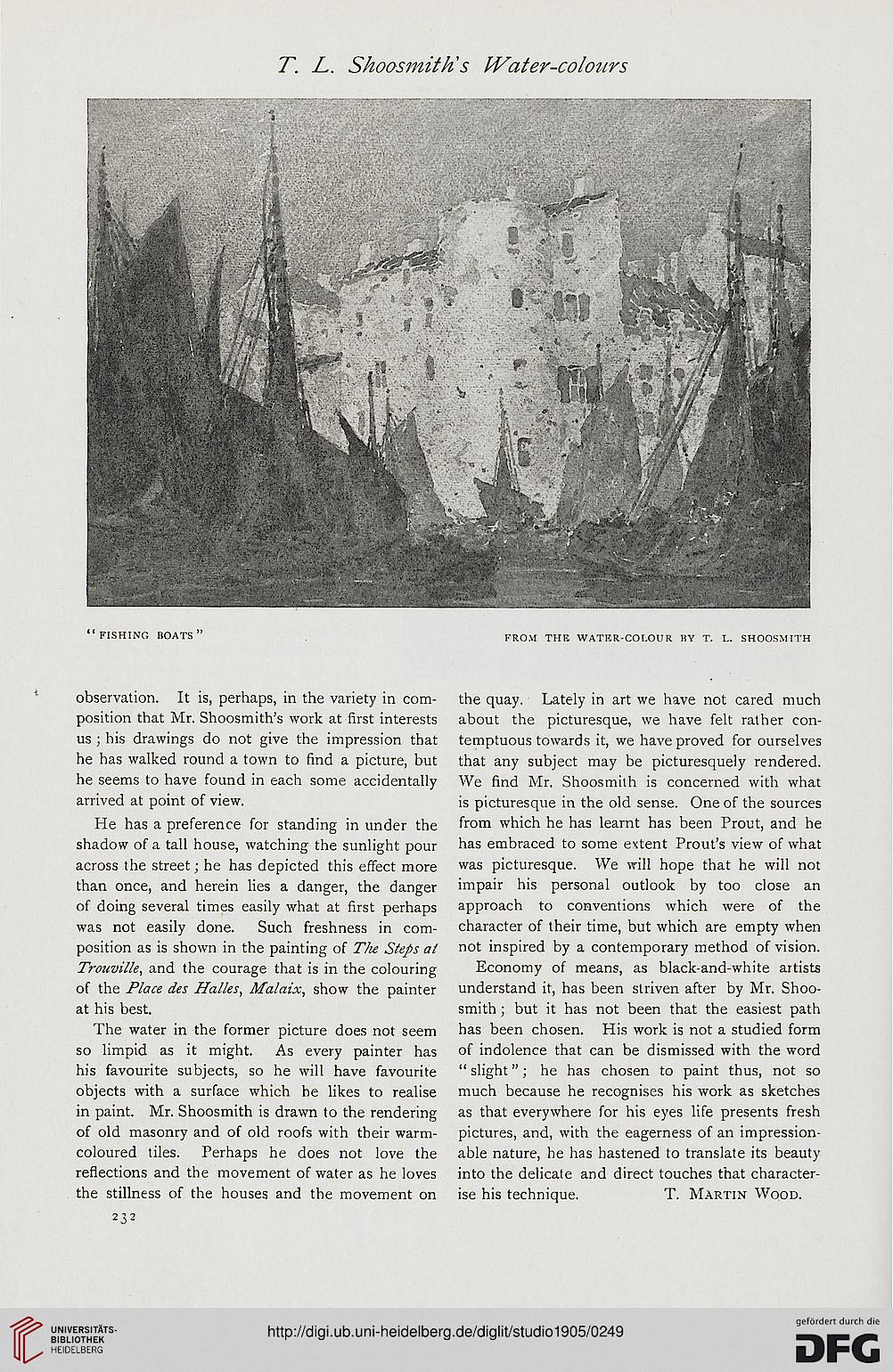 observation. It is, perhaps, in the variety in com-
position that Mr. Shoosmith's work at first interests
us ; his drawings do not give the impression that
he has walked round a town to find a picture, but
he seems to have found in each some accidentally
arrived at point of view.

He has a preference for standing in under the
shadow of a tall house, watching the sunlight pour
across the street; he has depicted this effect more
than once, and herein lies a danger, the danger
of doing several times easily what at first perhaps
was not easily done. Such freshness in com-
position as is shown in the painting of TJie Steps ai
Trouville, and the courage that is in the colouring
of the Place des Halles, Malaix, show the painter
at his best.

The water in the former picture does not seem
so limpid as it might. As every painter has
his favourite subjects, so he will have favourite
objects with a surface which he likes to realise
in paint. Mr. Shoosmith is drawn to the rendering
of old masonry and of old roofs with their warm-
coloured tiles. Perhaps he does not love the
reflections and the movement of water as he loves
the stillness of the houses and the movement on
232

the quay. Lately in art we have not cared much
about the picturesque, we have felt rather con-
temptuous towards it, we have proved for ourselves
that any subject may be picturesquely rendered.
We find Mr. Shoosmith is concerned with what
is picturesque in the old sense. One of the sources
from which he has learnt has been Prout, and he
has embraced to some extent Prout's view of what
was picturesque. We will hope that he will not
impair his personal outlook by too close an
approach to conventions which were of the
character of their time, but which are empty when
not inspired by a contemporary method of vision.

Economy of means, as black-and-white artists
understand it, has been striven after by Mr. Shoo-
smith ; but it has not been that the easiest path
has been chosen. His work is not a studied form
of indolence that can be dismissed with the word
" slight"; he has chosen to paint thus, not so
much because he recognises his work as sketches
as that everywhere for his eyes life presents fresh
pictures, and, with the eagerness of an impression-
able nature, he has hastened to translate its beauty
into the delicate and direct touches that character-
ise his technique. T. Martin Wood.