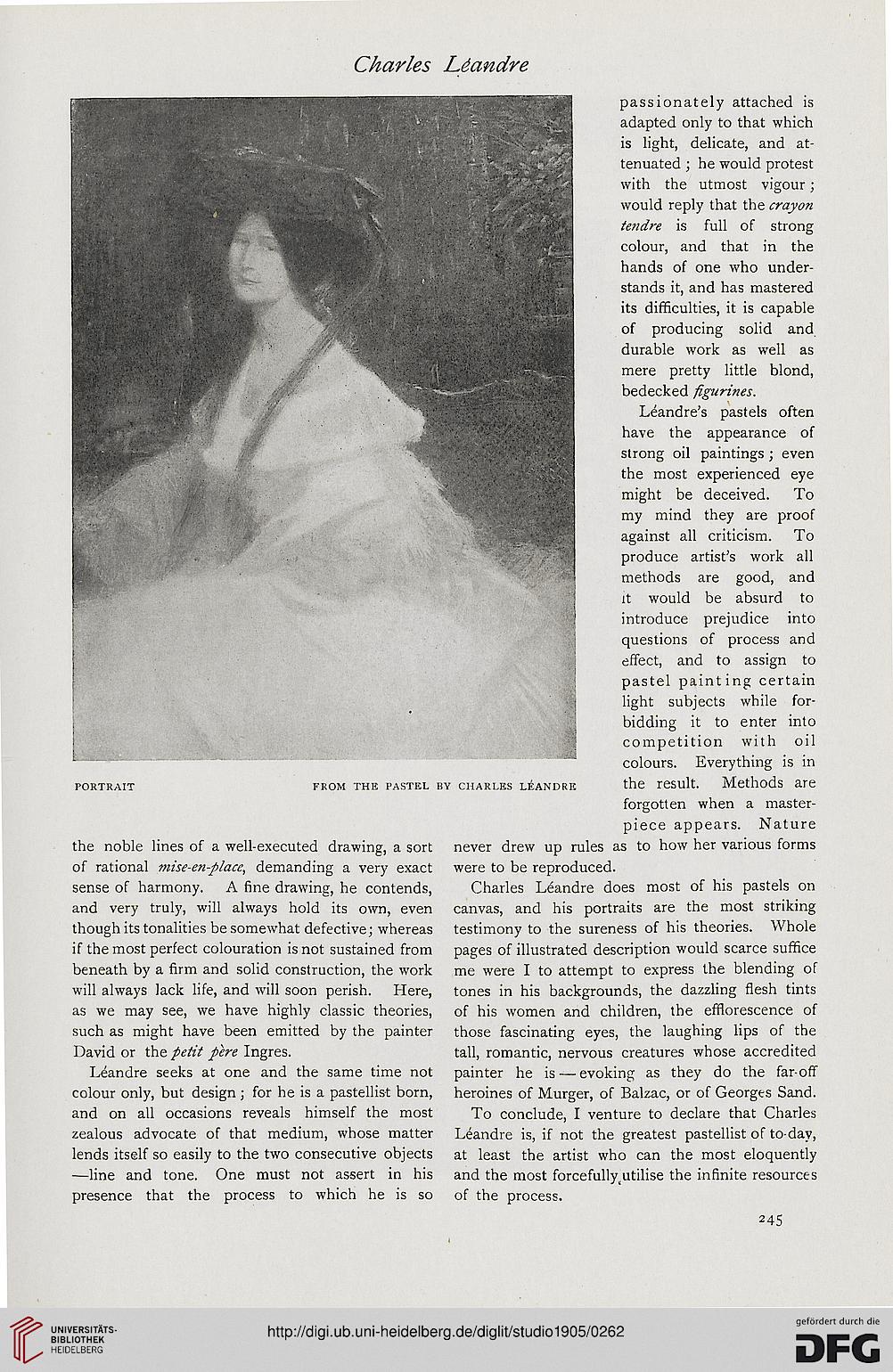 passionately attached is
adapted only to that which
is light, delicate, and at-
tenuated ; he would protest
with the utmost vigour;
would reply that the crayon
tendre is full of strong
colour, and that in the
hands of one who under-
stands it, and has mastered
its difficulties, it is capable
of producing solid and
durable work as well as
mere pretty little blond,
bedecked figurines.

Leandre's pastels often
have the appearance of
strong oil paintings ; even
the most experienced eye
might be deceived. To
my mind they are proof
against all criticism. To
produce artist's work all
methods are good, and
it would be absurd to
introduce prejudice into
questions of process and
effect, and to assign to
pastel painting certain
light subjects while for-
bidding it to enter into
competition with oil
colours. Everything is in

PORTRAIT FROM THE PASTEL BY CHARLES LEANDRE the result. Methods are

the noble lines of a well-executed drawing, a sort never drew up rules as to how her various forms

of rational mise-enplace, demanding a very exact were to be reproduced.

sense of harmony. A fine drawing, he contends, Charles Leandre does most of his pastels on

and very truly, will always hold its own, even canvas, and his portraits are the most striking

though its tonalities be somewhat defective; whereas testimony to the sureness of his theories. Whole

beneath by a firm and solid construction, the work me were I to attempt to express the blending of

will always lack life, and will soon perish. Here, tones in his backgrounds, the dazzling flesh tints

as we may see, we have highly classic theories, of his women and children, the efflorescence of

such as might have been emitted by the painter those fascinating eyes, the laughing lips of the

colour only, but design ; for he is a pastellis-t born, heroines of Murger, of Balzac, or of Georges Sand,

and on all occasions reveals himself the most To conclude, I venture to declare that Charles

zealous advocate of that medium, whose matter Leandre is, if not the greatest pastellist of to-day,

—line and tone. One must not assert in his and the most forcefully^tilise the infinite resources