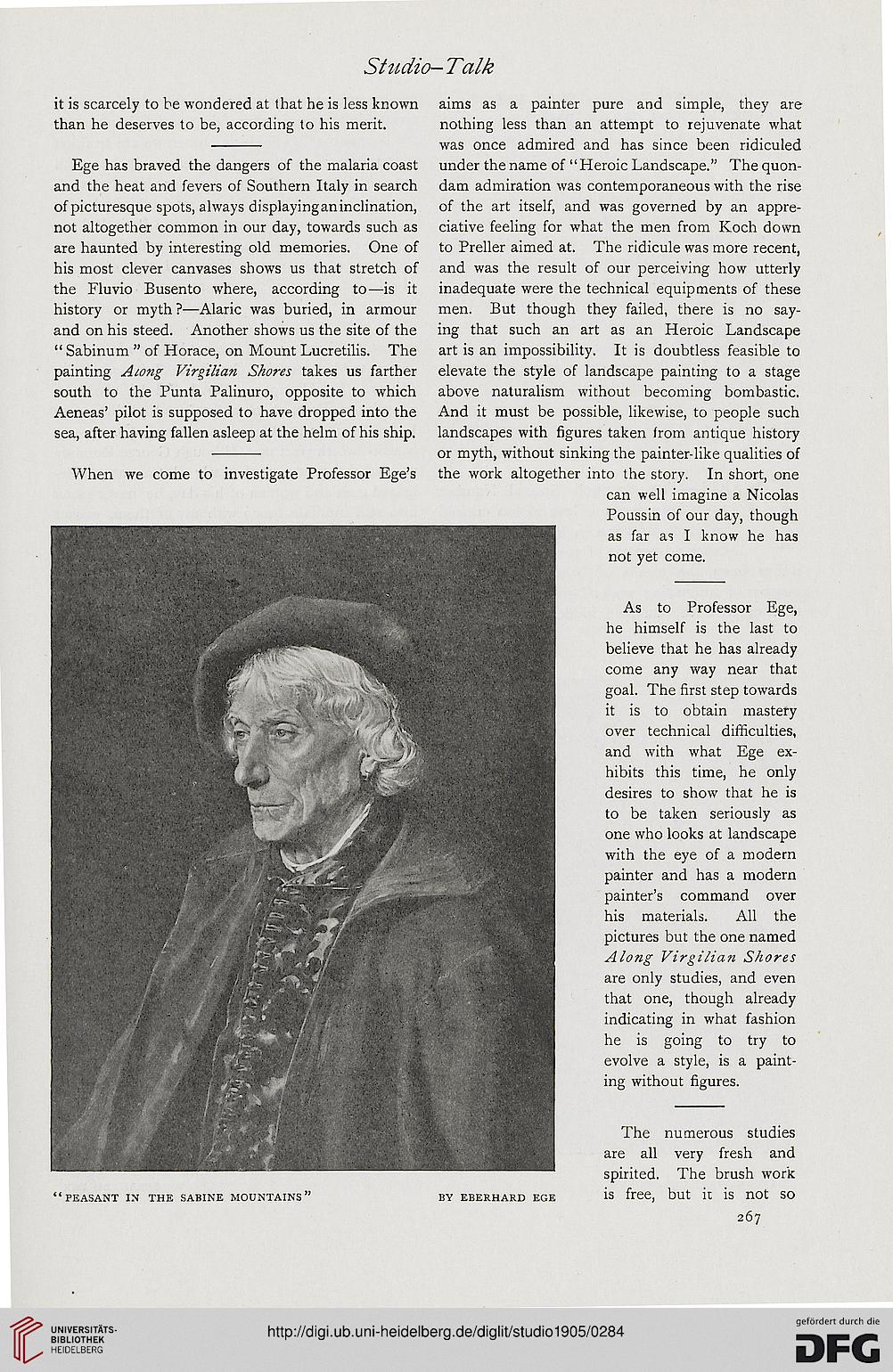 it is scarcely to be wondered at that he is less known aims as a painter pure and simple, they are
than he deserves to be, according to his merit. nothing less than an attempt to rejuvenate what
- was once admired and has since been ridiculed

Ege has braved the dangers of the malaria coast under the name of "Heroic Landscape." Thequon-
and the heat and fevers of Southern Italy in search dam admiration was contemporaneous with the rise
of picturesque spots, always displayinganinclination, of the art itself, and was governed by an appre-
not altogether common in our day, towards such as ciative feeling for what the men from Koch down
are haunted by interesting old memories. One of to Preller aimed at. The ridicule was more recent,
his most clever canvases shows us that stretch of and was the result of our perceiving how utterly
the Fluvio Busento where, according to—is it inadequate were the technical equipments of these
history or myth ?—Alaric was buried, in armour men. But though they failed, there is no say-
and on his steed. Another shows us the site of the ing that such an art as an Heroic Landscape
" Sabinum " of Horace, on Mount Lucretilis. The art is an impossibility. It is doubtless feasible to
painting Awng Virgilian Shores takes us farther elevate the style of landscape painting to a stage
south to the Punta Palinuro, opposite to which above naturalism without becoming bombastic.
Aeneas' pilot is supposed to have dropped into the And it must be possible, likewise, to people such
sea, after having fallen asleep at the helm of his ship, landscapes with figures taken from antique history

■-- or myth, without sinking the painter-like qualities of

When we come to investigate Professor Ege's the work altogether into the story. In short, one

can well imagine a Nicolas
Poussin of our day, though
as far as I know he has
not yet come.

As to Professor Ege,
he himself is the last to
believe that he has already
come any way near that
goal. The first step towards
it is to obtain mastery
over technical difficulties,
and with what Ege ex-
hibits this time, he only
desires to show that he is
to be taken seriously as
one who looks at landscape
with the eye of a modern
painter and has a modern
painter's command over
his materials. All the
pictures but the one named
Along Virgilian Shores
are only studies, and even
that one, though already
indicating in what fashion
he is going to try to
evolve a style, is a paint-
ing without figures.

The numerous studies
are all very fresh and
spirited. The brush work

'PEASANT IN THB SABINE MOUNTAINS" BY EEERHARD EGE IS free, but II IS not SO