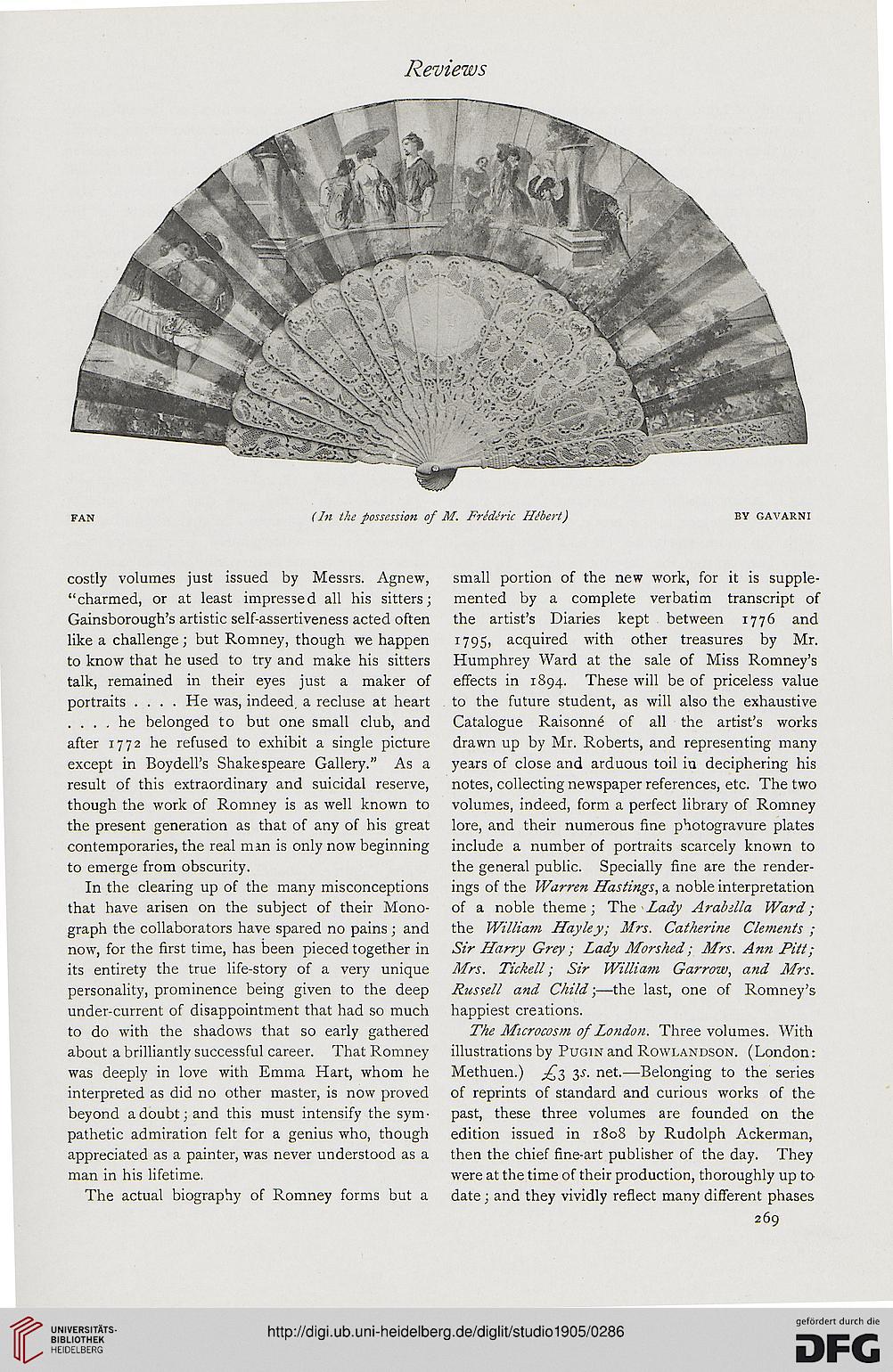 fan (In the possession of M. Frediric Hibert) by gavarni

costly volumes just issued by Messrs. Agnew,
"charmed, or at least impressed all his sitters;
Gainsborough's artistic self-assertiveness acted often
like a challenge; but Romney, though we happen
to know that he used to try and make his sitters
talk, remained in their eyes just a maker of
portraits .... He was, indeed, a recluse at heart
. ... he belonged to but one small club, and
after 1772 he refused to exhibit a single picture
except in BoydelPs Shakespeare Gallery." As a
result of this extraordinary and suicidal reserve,
though the work of Romney is as well known to
the present generation as that of any of his great
contemporaries, the real man is only now beginning
to emerge from obscurity.

In the clearing up of the many misconceptions
that have arisen on the subject of their Mono-
graph the collaborators have spared no pains; and
now, for the first time, has been pieced together in
its entirety the true life-story of a very unique
personality, prominence being given to the deep
under-current of disappointment that had so much
to do with the shadows that so early gathered
about a brilliantly successful career. That Romney
was deeply in love with Emma Hart, whom he
interpreted as did no other master, is now proved
beyond a doubt; and this must intensify the sym-
pathetic admiration felt for a genius who, though
appreciated as a painter, was never understood as a
man in his lifetime.

The actual biography of Romney forms but a

small portion of the new work, for it is supple-
mented by a complete verbatim transcript of
the artist's Diaries kept between 1776 and
1795, acquired with other treasures by Mr.
Humphrey Ward at the sale of Miss Romney's
effects in 1894. These will be of priceless value
to the future student, as will also the exhaustive
Catalogue Raisonne of all the artist's works
drawn up by Mr. Roberts, and representing many
years of close and arduous toil ia deciphering his
notes, collecting newspaper references, etc. The two
volumes, indeed, form a perfect library of Romney
lore, and their numerous fine photogravure plates
include a number of portraits scarcely known to
the general public. Specially fine are the render-
ings of the Warren Hastings, a noble interpretation
of a noble theme; The Lady Arabilla Ward;
the William Hayley; Mrs. Catherine Clements ;
Sir Harry Grey ; Lady Morshed; Mrs. Ann Pitt;
Mrs. Tickell; Sir William Gar row, and Mrs.
Russell and Child;—the last, one of Romney's
happiest creations.

The Microcosm of London. Three volumes. With
illustrations by Pugin and Rowlandson. (London:
Methuen.) ^3 3^. net.—Belonging to the series
of reprints of standard and curious works of the
past, these three volumes are founded on the
edition issued in 1808 by Rudolph Ackerman,
then the chief fine-art publisher of the day. They
were at the time of their production, thoroughly up to
date ; and they vividly reflect many different phases