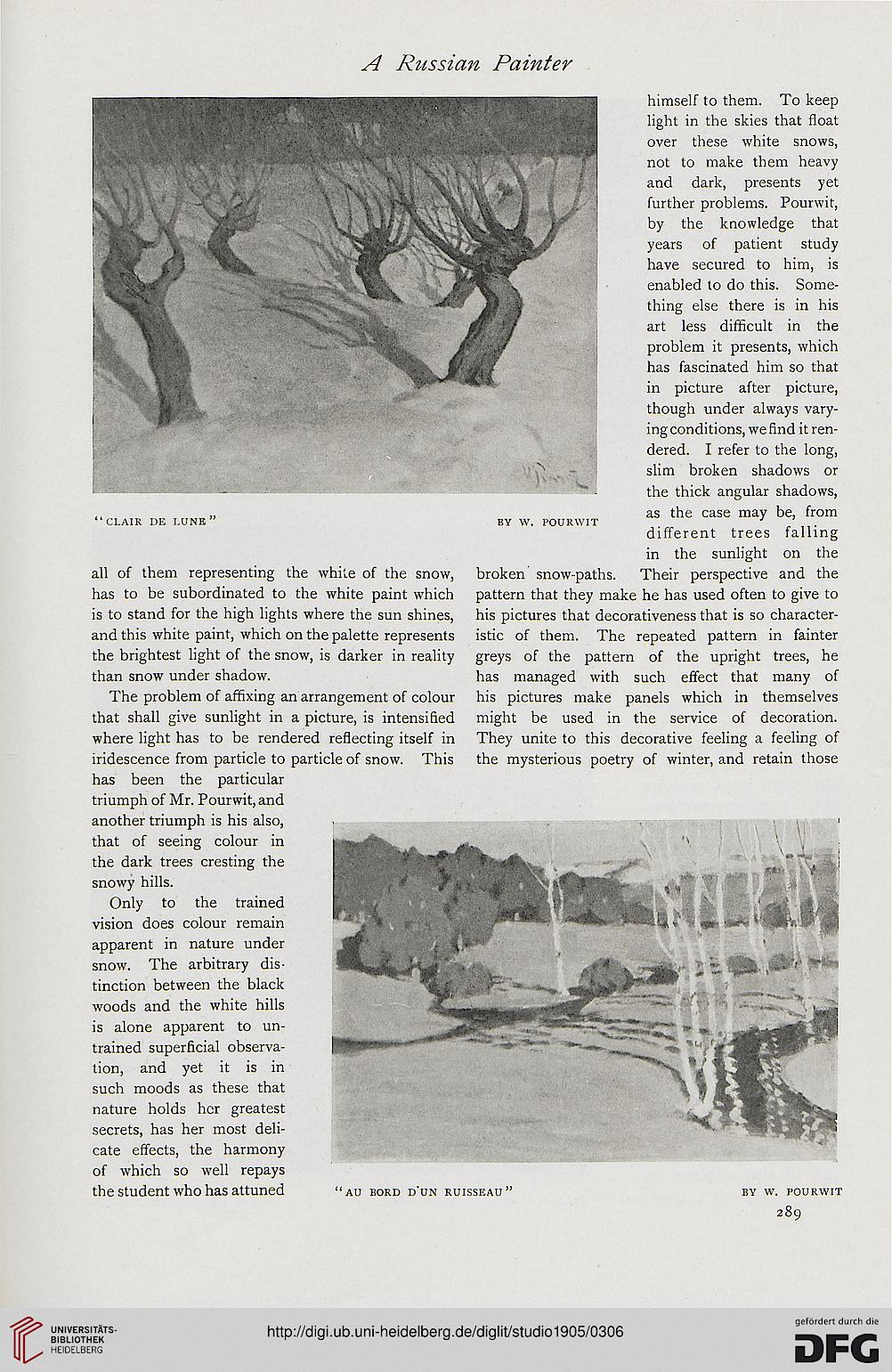 himself to them. To keep
light in the skies that float
over these white snows,
not to make them heavy
and dark, presents yet
further problems. Pourwit,
by the knowledge that
years of patient study
have secured to him, is
enabled to do this. Some-
thing else there is in his
art less difficult in the
problem it presents, which
has fascinated him so that
in picture after picture,
though under always vary-
ing conditions, wefind itren-
dered. I refer to the long,
slim broken shadows or
the thick angular shadows,
as the case may be, from
different trees falling
in the sunlight on the

all of them representing the white of the snow, broken snow-paths. Their perspective and the
has to be subordinated to the white paint which pattern that they make he has used often to give to
is to stand for the high lights where the sun shines, his pictures that decorativeness that is so character-
and this white paint, which on the palette represents istic of them. The repeated pattern in fainter
the brightest light of the snow, is darker in reality greys of the pattern of the upright trees, he
than snow under shadow. has managed with such effect that many of

The problem of affixing an arrangement of colour his pictures make panels which in themselves
that shall give sunlight in a picture, is intensified might be used in the service of decoration,
where light has to be rendered reflecting itself in They unite to this decorative feeling a feeling of
iridescence from particle to particle of snow. This the mysterious poetry of winter, and retain those
has been the particular
triumph of Mr. Pourwit, and
another triumph is his also,
that of seeing colour in
the dark trees cresting the
snowy hills.

Only to the trained
vision does colour remain
apparent in nature under
snow. The arbitrary dis-
tinction between the black
woods and the white hills
is alone apparent to un-
trained superficial observa-
tion, and yet it is in
such moods as these that
nature holds her greatest
secrets, has her most deli-
cate effects, the harmony
of which so well repays
the student who has attuned "ad bord dun ruisseau" by w. pourwit