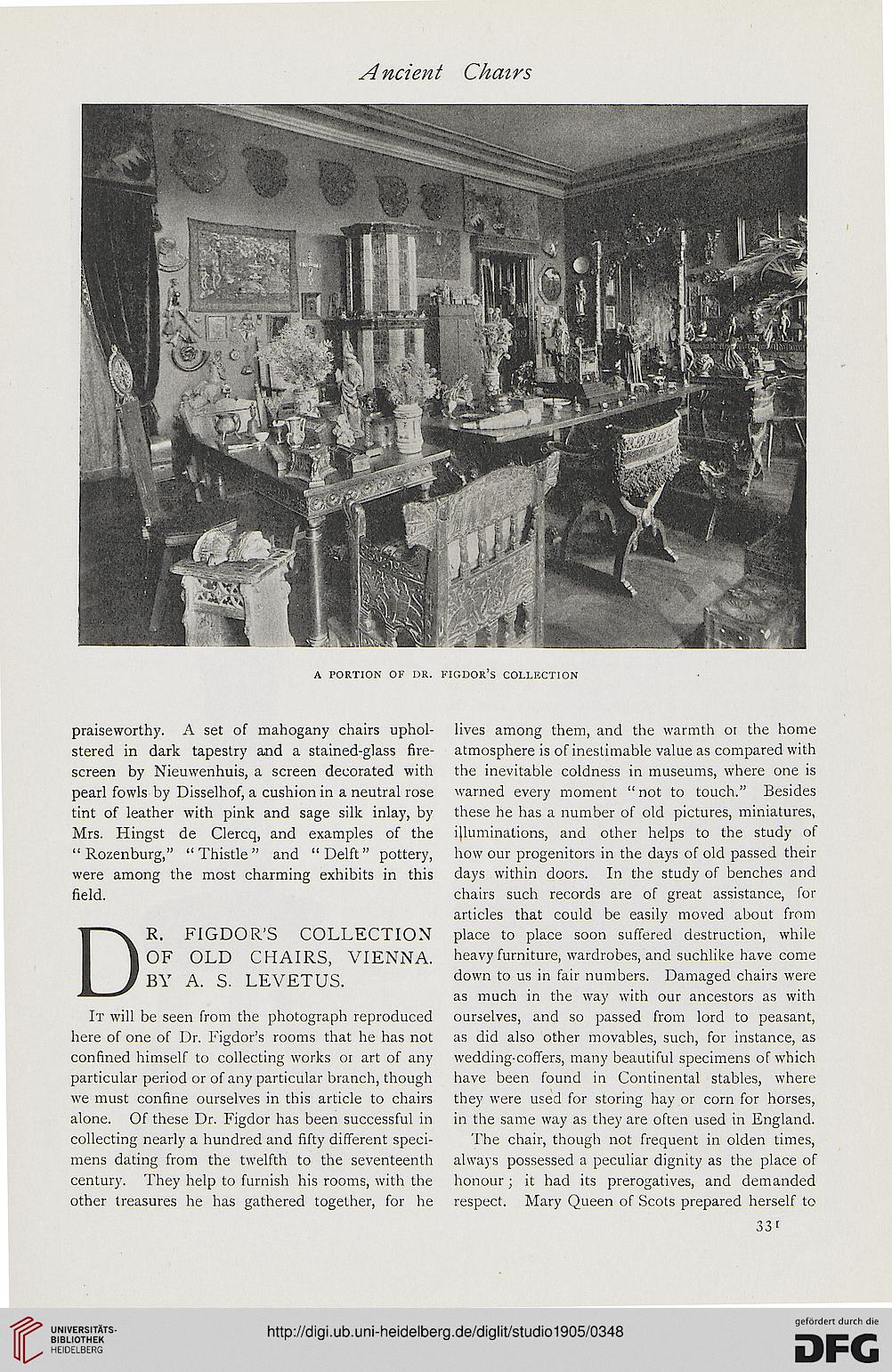 A PORTION OF I)R. KIGDOR's COLLECTION

praiseworthy. A set of mahogany chairs uphol-
stered in dark tapestry and a stained-glass fire-
screen by Nieuwenhuis, a screen decorated with
pearl fowls by Disselhof, a cushion in a neutral rose
tint of leather with pink and sage silk inlay, by
Mrs. Hingst de Clercq, and examples of the
"Rozenburg," "Thistle" and "Delft" pottery,
were among the most charming exhibits in this
field.

It will be seen from the photograph reproduced
here of one of Dr. Figdor's rooms that he has not
confined himself to collecting works 01 art of any
particular period or of any particular branch, though
we must confine ourselves in this article to chairs
alone. Of these Dr. Figdor has been successful in
collecting nearly a hundred and fifty different speci-
mens dating from the twelfth to the seventeenth
century. They help to furnish his rooms, with the
other treasures he has gathered together, for he

lives among them, and the warmth or the home
atmosphere is of inestimable value as compared with
the inevitable coldness in museums, where one is
warned every moment " not to touch." Besides
these he has a number of old pictures, miniatures,
illuminations, and other helps to the study of
how our progenitors in the days of old passed their
days within doors. In the study of benches and
chairs such records are of great assistance, for
articles that could be easily moved about from
place to place soon suffered destruction, while
heavy furniture, wardrobes, and suchlike have come
down to us in fair numbers. Damaged chairs were
as much in the way with our ancestors as with
ourselves, and so passed from lord to peasant,
as did also other movables, such, for instance, as
wedding-coffers, many beautiful specimens of which
have been found in Continental stables, where
they were used for storing hay or corn for horses,
in the same way as they are often used in England.

The chair, though not frequent in olden times,
always possessed a peculiar dignity as the place of
honour; it had its prerogatives, and demanded
respect. Mary Queen of Scots prepared herself to