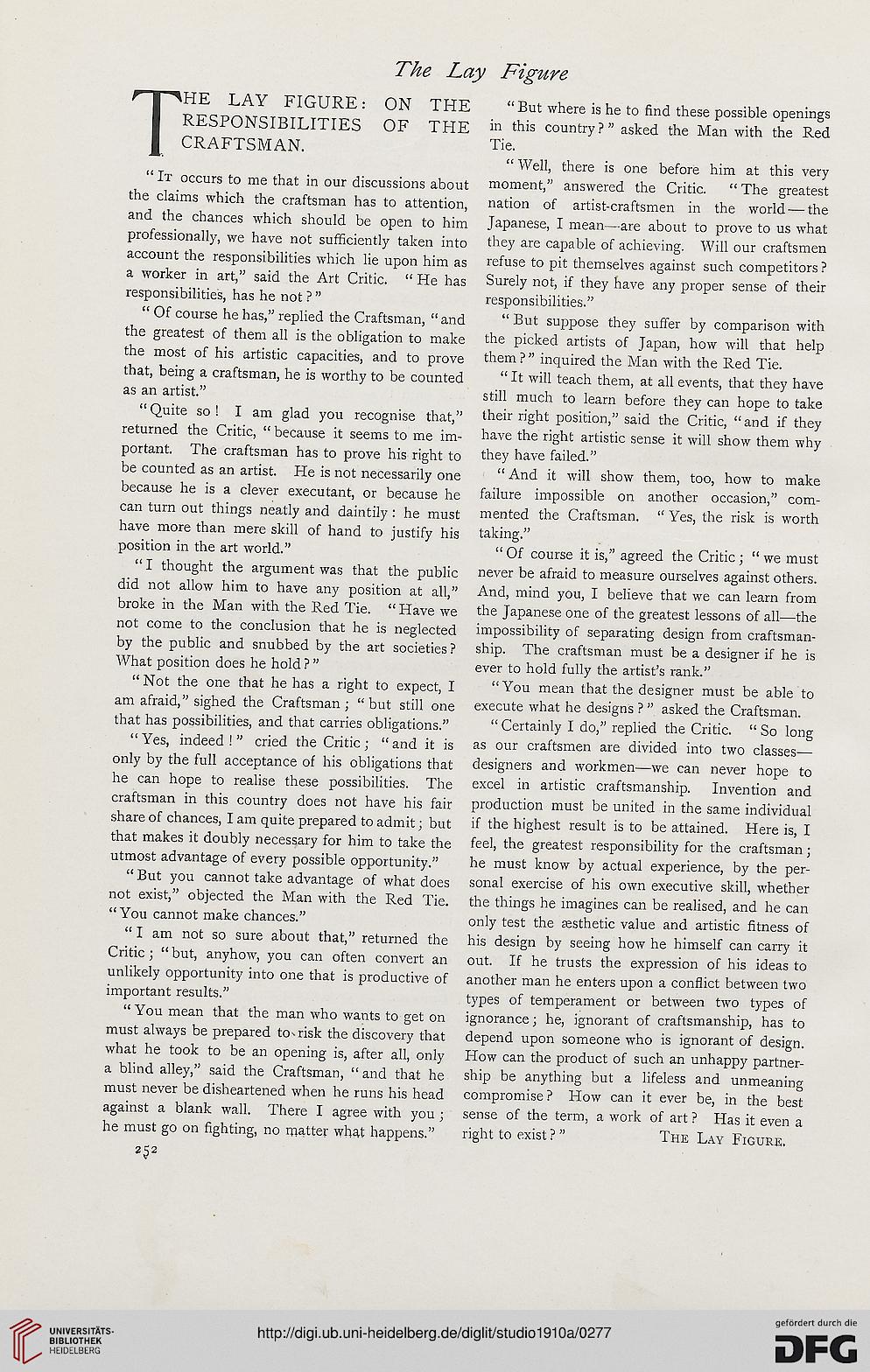 “ It occurs to me that in our discussions about
the claims which the craftsman has to attention,
and the chances which should be open to him
professionally, we have not sufficiently taken into
account the responsibilities which lie upon him as
a worker in art,” said the Art Critic. “ He has
responsibilities, has he not ? ”

“ Of course he has,” replied the Craftsman, “and
the greatest of them all is the obligation to make
the most of his artistic capacities, and to prove
that, being a craftsman, he is worthy to be counted
as an artist.”

“ Quite so ! I am glad you recognise that,”
returned the Critic, “ because it seems to me im-
portant. The craftsman has to prove his right to
be counted as an artist. He is not necessarily one
because he is a clever executant, or because he
can turn out things neatly and daintily: he must
have more than mere skill of hand to justify his
position in the art world.”

“ I thought the argument was that the public
did not allow him to have any position at all,”
broke in the Man with the Red Tie. “ Have we
not come to the conclusion that he is neglected
by the public and snubbed by the art societies?
What position does he hold ? ”

“ Not the one that he has a right to expect, I
am afraid,” sighed the Craftsman ; “ but still one
that has possibilities, and that carries obligations.”

“ Yes, indeed 1 ” cried the Critic ; “ and it is
only by the full acceptance of his obligations that
he can hope to realise these possibilities. The
craftsman in this country does not have his fair
share of chances, I am quite prepared to admit; but
that makes it doubly necessary for him to take the
utmost advantage of every possible opportunity.”

“ But you cannot take advantage of what does
not exist,” objected the Man with the Red Tie.
“You cannot make chances.”

“ I am not so sure about that,” returned the
Critic ; “ but, anyhow, you can often convert an
unlikely opportunity into one that is productive of
important results.”

“You mean that the man who wants to get on
must always be prepared to risk the discovery that
what he took to be an opening is, after all, only
a blind alley,” said the Craftsman, “ and that he
must never be disheartened when he runs his head
against a blank wall. There I agree with you ;
he must go on fighting, no matter what happens.”
252

“ But where is he to find these possible openings
in this country ? ” asked the Man with the Red
Tie.

“ Well, there is one before him at this very
moment,” answered the Critic. “ The greatest
nation of artist-craftsmen in the world — the
Japanese, I mean—are about to prove to us what
they are capable of achieving. Will our craftsmen
refuse to pit themselves against such competitors ?
Surely not, if they have any proper sense of their
responsibilities.”

“ But suppose they suffer by comparison with
the picked artists of Japan, how will that help
them?” inquired the Man with the Red Tie.

“ It will teach them, at all events, that they have
still much to learn before they can hope to take
their right position,” said the Critic, “and if they
have the right artistic sense it will show them why
they have failed.”

“ And it will show them, too, how to make
failure impossible on another occasion,” com-
mented the Craftsman. “ Yes, the risk is worth
taking.”

“ Of course it is,” agreed the Critic ; “ we must
never be afraid to measure ourselves against others.
And, mind you, I believe that we can learn from
the Japanese one of the greatest lessons of all—the
impossibility of separating design from craftsman-
ship. The craftsman must be a designer if he is
ever to hold fully the artist’s rank.”

“You mean that the designer must be able to
execute what he designs ? ” asked the Craftsman.

“ Certainly I do,” replied the Critic. “ So long
as our craftsmen are divided into two classes—
designers and workmen—we can never hope to
excel in artistic craftsmanship. Invention and
production must be united in the same individual
if the highest result is to be attained. Here is, I
feel, the greatest responsibility for the craftsman;
he must know by actual experience, by the per-
sonal exercise of his own executive skill, whether
the things he imagines can be realised, and he can
only test the msthetic value and artistic fitness of
his design by seeing how he himself can carry it
out. If he trusts the expression of his ideas to
another man he enters upon a conflict between two
types of temperament or between two types of
ignorance; he, ignorant of craftsmanship, has to
depend upon someone who is ignorant of design.
How can the product of such an unhappy partner-
ship be anything but a lifeless and unmeaning
compromise? How can it ever be, in the best
sense of the term, a work of art ? Has it even a
right to exist ? ” The Lay Figure.