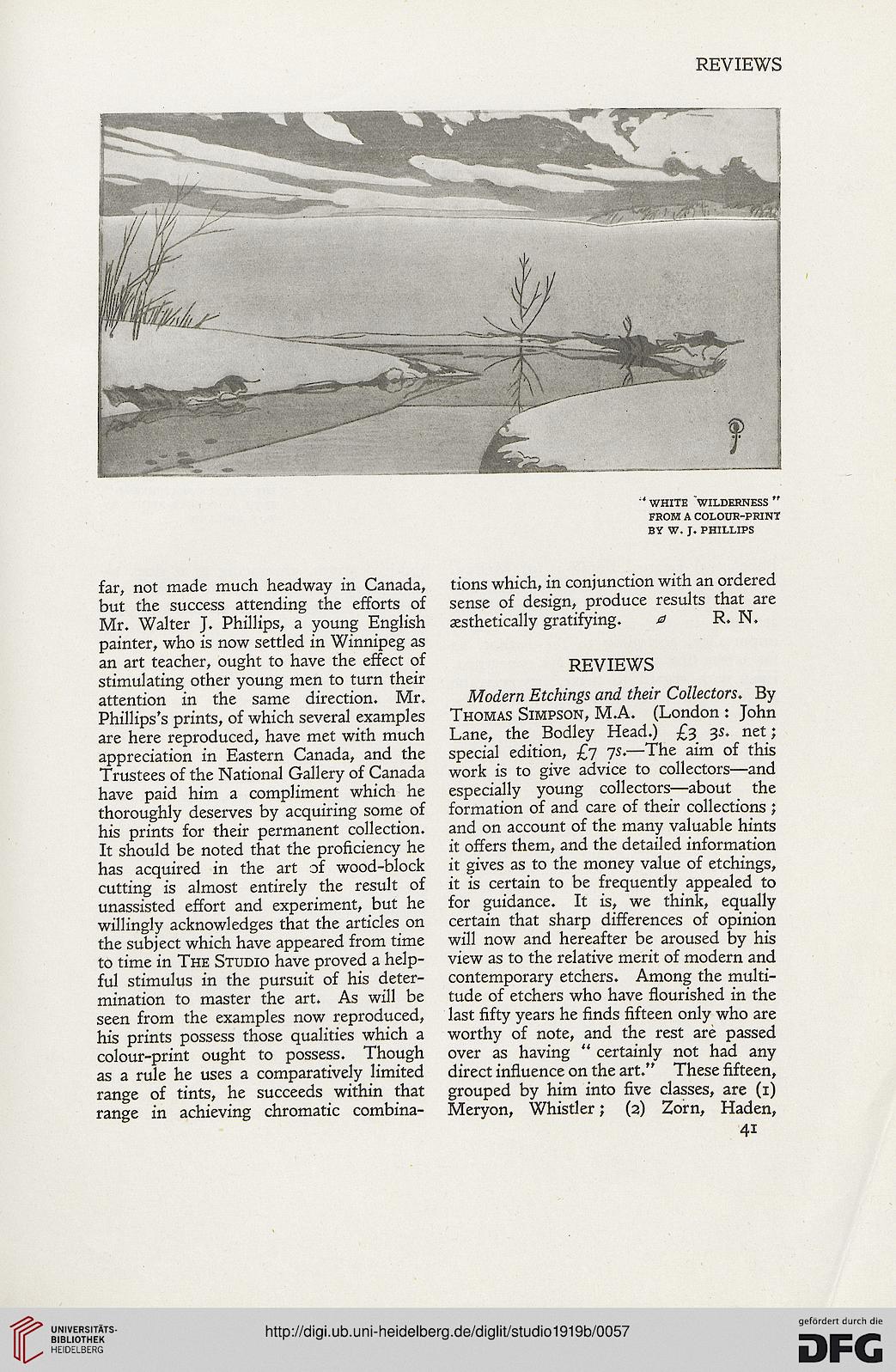 ‘ WHITE WILDERNESS ”
FROM A COLOUR-PRINT
BY W. J. PHILLIPS

far, not made much headway in Canada,
but the success attending the efforts of
Mr. Walter J. Phillips, a young English
painter, who is now settled in Winnipeg as
an art teacher, ought to have the effect of
stimulating other young men to turn their
attention in the same direction. Mr.
Phillips’s prints, of which several examples
are here reproduced, have met with much
appreciation in Eastern Canada, and the
Trustees of the National Gallery of Canada
have paid him a compliment which he
thoroughly deserves by acquiring some of
his prints for their permanent collection.
It should be noted that the proficiency he
has acquired in the art of wood-block
cutting is almost entirely the result of
unassisted effort and experiment, but he
willingly acknowledges that the articles on
the subject which have appeared from time
to time in The Studio have proved a help-
ful stimulus in the pursuit of his deter-
mination to master the art. As will be
seen from the examples now reproduced,
his prints possess those qualities which a
colour-print ought to possess. Though
as a rule he uses a comparatively limited
range of tints, he succeeds within that
range in achieving chromatic combina-

tions which, in conjunction with an ordered
sense of design, produce results that are
aesthetically gratifying. a R. N.

Modern Etchings and their Collectors. By
Thomas Simpson, M.A. (London : John
Lane, the Bodley Head.) £3 3s. net;
special edition, £7 7s.—The aim of this
work is to give advice to collectors—and
especially young collectors—about the
formation of and care of their collections ;
and on account of the many valuable hints
it offers them, and the detailed information
it gives as to the money value of etchings,
it is certain to be frequently appealed to
for guidance. It is, we think, equally
certain that sharp differences of opinion
will now and hereafter be aroused by his
view as to the relative merit of modern and
contemporary etchers. Among the multi-
tude of etchers who have flourished in the
last fifty years he finds fifteen only who are
worthy of note, and the rest are passed
over as having “ certainly not had any
direct influence on the art.” These fifteen,
grouped by him into five classes, are (1)
Meryon, Whistler; (2) Zorn, Haden,