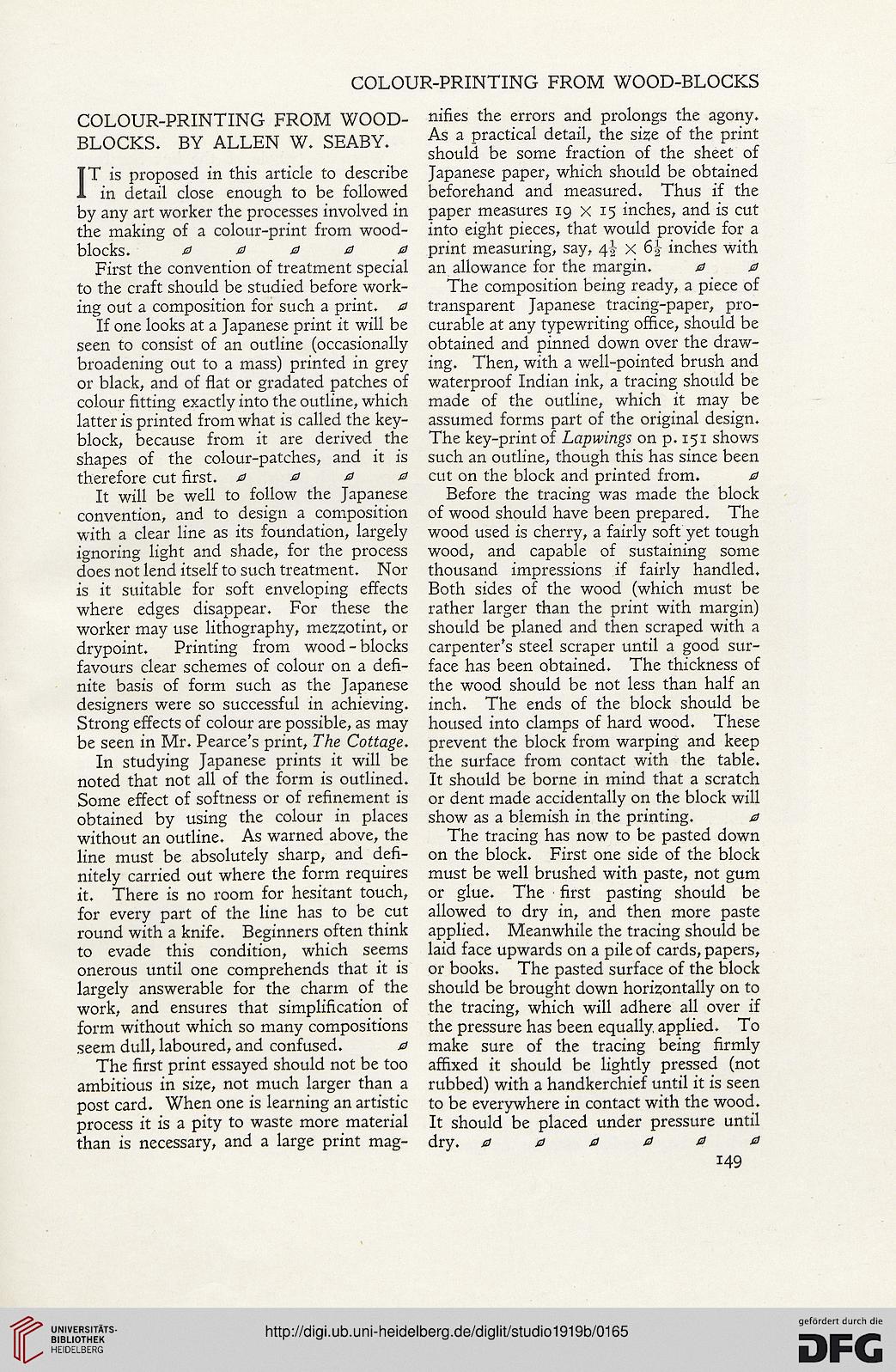 IT is proposed in this article to describe
in detail close enough to be followed
by any art worker the processes involved in
the making of a colour-print from wood-
blocks. o 0 0 0 0

First the convention of treatment special
to the craft should be studied before work-
ing out a composition for such a print, 0
If one looks at a Japanese print it will be
seen to consist of an outline (occasionally
broadening out to a mass) printed in grey
or black, and of flat or gradated patches of
colour fitting exactly into the outline, which
latter is printed from what is called the key-
block, because from it are derived the
shapes of the colour-patches, and it is
therefore cut first. 0000
It will be well to follow the Japanese
convention, and to design a composition
with a clear line as its foundation, largely
ignoring light and shade, for the process
does not lend itself to such treatment. Nor
is it suitable for soft enveloping effects
where edges disappear. For these the
worker may use lithography, mezzotint, or
drypoint. Printing from wood - blocks
favours clear schemes of colour on a defi-
nite basis of form such as the Japanese
designers were so successful in achieving.
Strong effects of colour are possible, as may
be seen in Mr. Pearce’s print. The Cottage,
In studying Japanese prints it will be
noted that not all of the form is outlined.
Some effect of softness or of refinement is
obtained by using the colour in places
without an outline. As warned above, the
line must be absolutely sharp, and defi-
nitely carried out where the form requires
it. There is no room for hesitant touch,
for every part of the line has to be cut
round with a knife. Beginners often think
to evade this condition, which seems
onerous until one comprehends that it is
largely answerable for the charm of the
work, and ensures that simplification of
form without which so many compositions
seem dull, laboured, and confused. 0

The first print essayed should not be too
ambitious in size, not much larger than a
post card. When one is learning an artistic
process it is a pity to waste more material
than is necessary, and a large print mag-

nifies the errors and prolongs the agony.
As a practical detail, the size of the print
should be some fraction of the sheet of
Japanese paper, which should be obtained
beforehand and measured. Thus if the
paper measures 19 x 15 inches, and is cut
into eight pieces, that would provide for a
print measuring, say, 4i X 61 inches with
an allowance for the margin. 0 0

The composition being ready, a piece of
transparent Japanese tracing-paper, pro-
curable at any typewriting office, should be
obtained and pinned down over the draw-
ing. Then, with a well-pointed brush and
waterproof Indian ink, a tracing should be
made of the outline, which it may be
assumed forms part of the original design.
The key-print of Lapwings on p. 151 shows
such an outline, though this has since been
cut on the block and printed from. 0
Before the tracing was made the block
of wood should have been prepared. The
wood used is cherry, a fairly soft yet tough
wood, and capable of sustaining some
thousand impressions if fairly handled.
Both sides of the wood (which must be
rather larger than the print with margin)
should be planed and then scraped with a
carpenter’s steel scraper until a good sur-
face has been obtained. The thickness of
the wood should be not less than half an
inch. The ends of the block should be
housed into clamps of hard wood. These
prevent the block from warping and keep
the surface from contact with the table.
It should be borne in mind that a scratch
or dent made accidentally on the block will
show as a blemish in the printing. 0

The tracing has now to be pasted down
on the block. First one side of the block
must be well brushed with paste, not gum
or glue. The first pasting should be
allowed to dry in, and then more paste
applied. Meanwhile the tracing should be
laid face upwards on a pile of cards, papers,
or books. The pasted surface of the block
should be brought down horizontally on to
the tracing, which will adhere all over if
the pressure has been equally applied. To
make sure of the tracing being firmly
affixed it should be lightly pressed (not
rubbed) with a handkerchief until it is seen
to be everywhere in contact with the wood.
It should be placed under pressure until
. 0 0 0 0 0 0