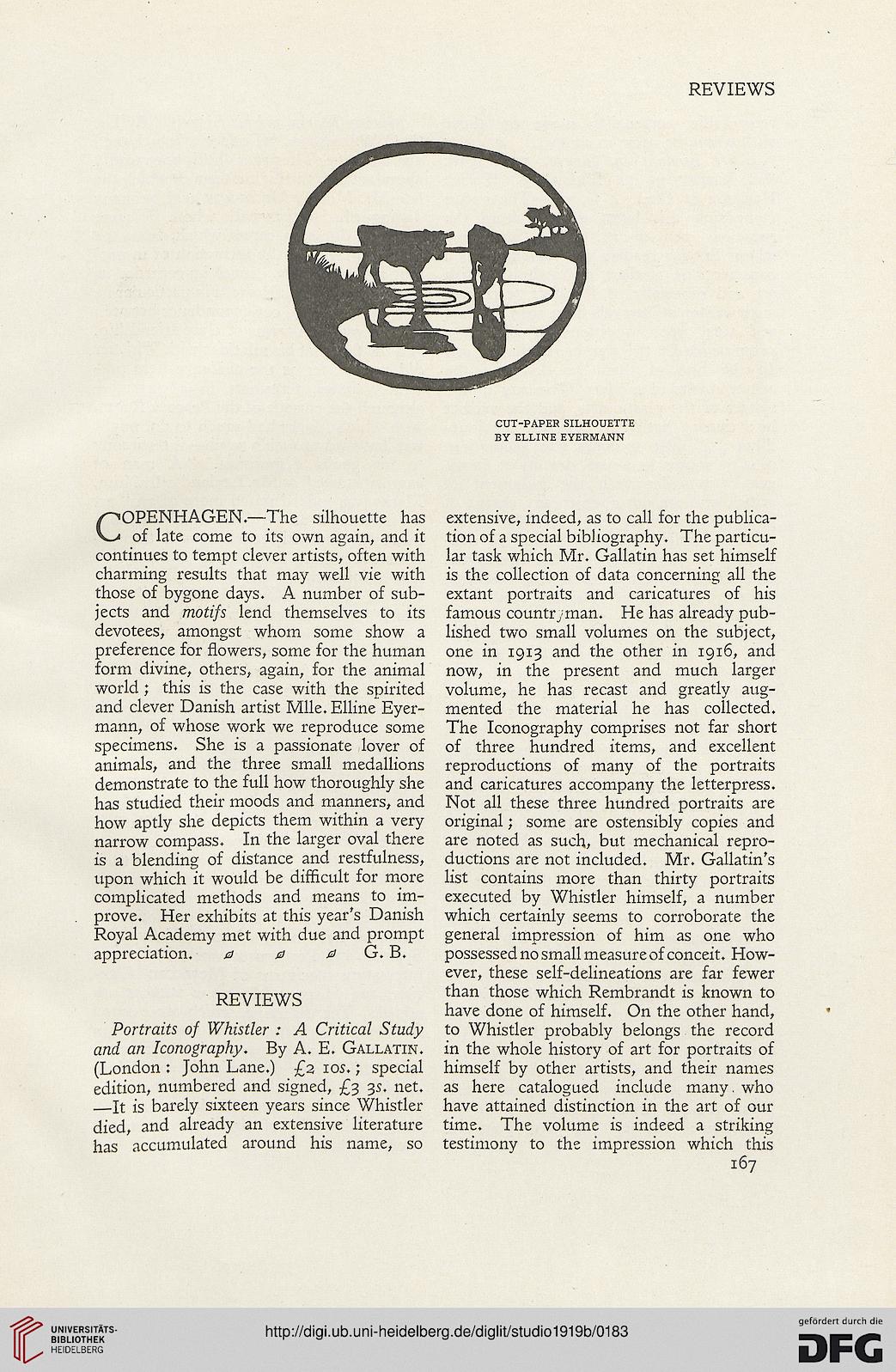 OPENHAGEN.—The silhouette has
of late come to its own again, and it
continues to tempt clever artists, often with
charming results that may well vie with
those of bygone days. A number of sub-
jects and motifs lend themselves to its
devotees, amongst whom some show a
preference for flowers, some for the human
form divine, others, again, for the animal
world ; this is the case with the spirited
and clever Danish artist Mile. Elline Eyer-
mann, of whose work we reproduce some
specimens. She is a passionate lover of
animals, and the three small medallions
demonstrate to the full how thoroughly she
has studied their moods and manners, and
how aptly she depicts them within a very
narrow compass. In the larger oval there
is a blending of distance and restfulness,
upon which it would be difficult for more
complicated methods and means to im-
prove. Her exhibits at this year's Danish
Royal Academy met with due and prompt
appreciation. a a a G. B.

Portraits of Whistler : A Critical Study
and an Iconography. By A. E. Gallatin.
(London : John Lane.) £2 10s.; special
edition, numbered and signed, £3 3s. net.
—It is barely sixteen years since Whistler
died, and already an extensive literature
has accumulated around his name, so

extensive, indeed, as to call for the publica-
tion of a special bibliography. The particu-
lar task which Mr. Gallatin has set himself
is the collection of data concerning all the
extant portraits and caricatures of his
famous countryman. He has already pub-
lished two small volumes on the subject,
one in 1913 and the other in 1916, and
now, in the present and much larger
volume, he has recast and greatly aug-
mented the material he has collected.
The Iconography comprises not far short
of three hundred items, and excellent
reproductions of many of the portraits
and caricatures accompany the letterpress.
Not all these three hundred portraits are
original; some are ostensibly copies and
are noted as such, but mechanical repro-
ductions are not included. Mr. Gallatin's
list contains more than thirty portraits
executed by Whistler himself, a number
which certainly seems to corroborate the
general impression of him as one who
possessed no small measure of conceit. How-
ever, these self-delineations are far fewer
than those which Rembrandt is known to
have done of himself. On the other hand,
to Whistler probably belongs the record
in the whole history of art for portraits of
himself by other artists, and their names
as here catalogued include many, who
have attained distinction in the art of our
time. The volume is indeed a striking
testimony to the impression which this