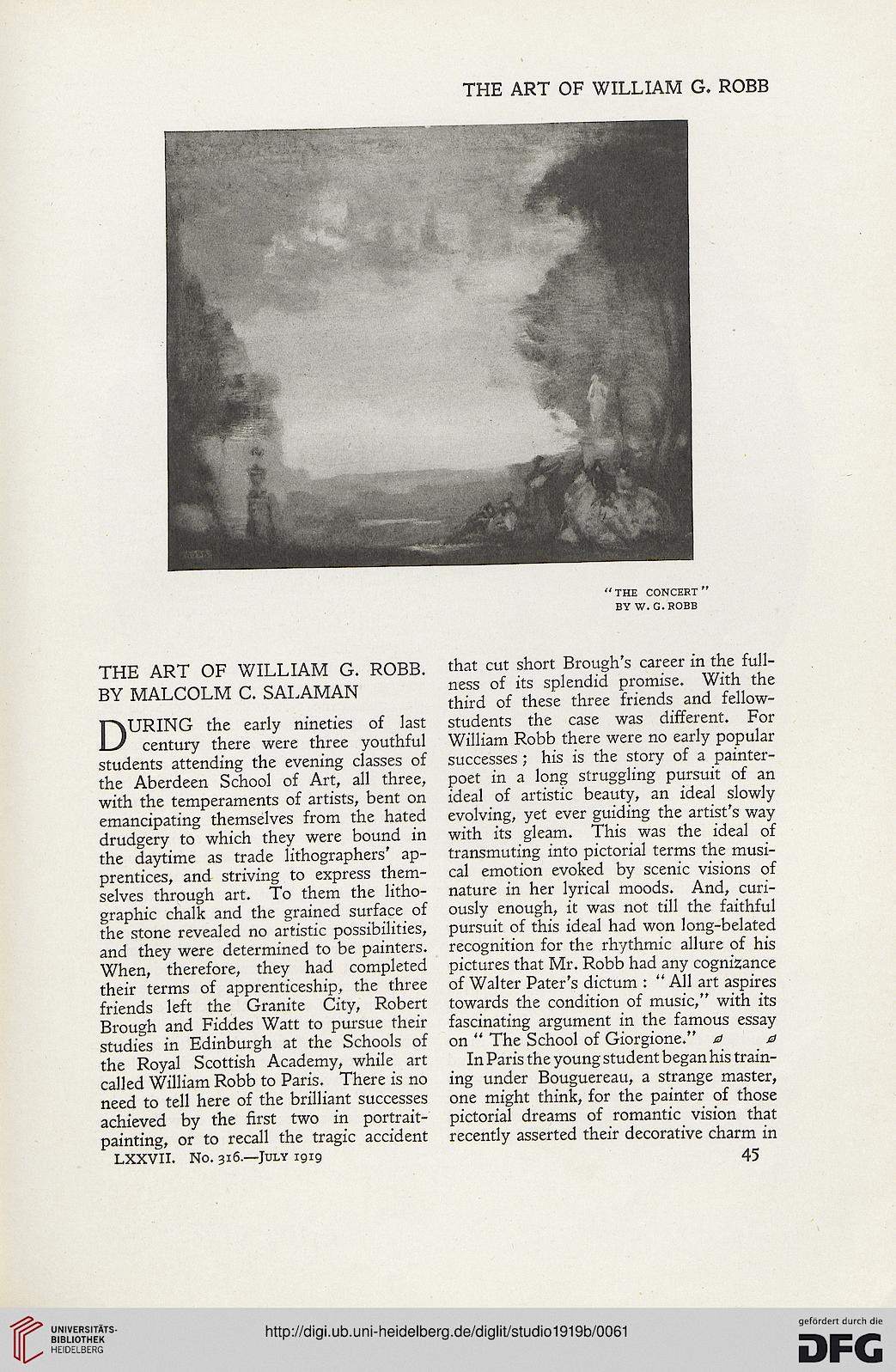 Information about OCR text
THE ART OF WILLIAM G. ROBB

THE ART OF WILLIAM G. ROBB.
BY MALCOLM C. SALAMAN

DURING the early nineties of last
century there were three youthful
students attending the evening classes of
the Aberdeen School of Art, all three,
with the temperaments of artists, bent on
emancipating themselves from the hated
drudgery to which they were bound in
the daytime as trade lithographers' ap-
prentices, and striving to express them-
selves through art. To them the litho-
graphic chalk and the grained surface of
the stone revealed no artistic possibilities,
and they were determined to be painters.
When, therefore, they had completed
their terms of apprenticeship, the three
friends left the Granite City, Robert
Brough and Fiddes Watt to pursue their
studies in Edinburgh at the Schools of
the Royal Scottish Academy, while art
called William Robb to Paris. There is no
need to tell here of the brilliant successes
achieved by the first two in portrait-
painting, or to recall the tragic accident
LXXVII. No. 316.—July 1919

that cut short Brough's career in the full-
ness of its splendid promise. With the
third of these three friends and fellow-
students the case was different. For
William Robb there were no early popular
successes; his is the story of a painter-
poet in a long struggling pursuit of an
ideal of artistic beauty, an ideal slowly
evolving, yet ever guiding the artist's way
with its gleam. This was the ideal of
transmuting into pictorial terms the musi-
cal emotion evoked by scenic visions of
nature in her lyrical moods. And, curi-
ously enough, it was not till the faithful
pursuit of this ideal had won long-belated
recognition for the rhythmic allure of his
pictures that Mr. Robb had any cognizance
of Walter Pater's dictum : “ All art aspires
towards the condition of music,'' with its
fascinating argument in the famous essay
on “ The School of Giorgione.” 0 0

In Paris the young student began his train-
ing under Bouguereau, a strange master,
one might think, for the painter of those
pictorial dreams of romantic vision that
recently asserted their decorative charm in