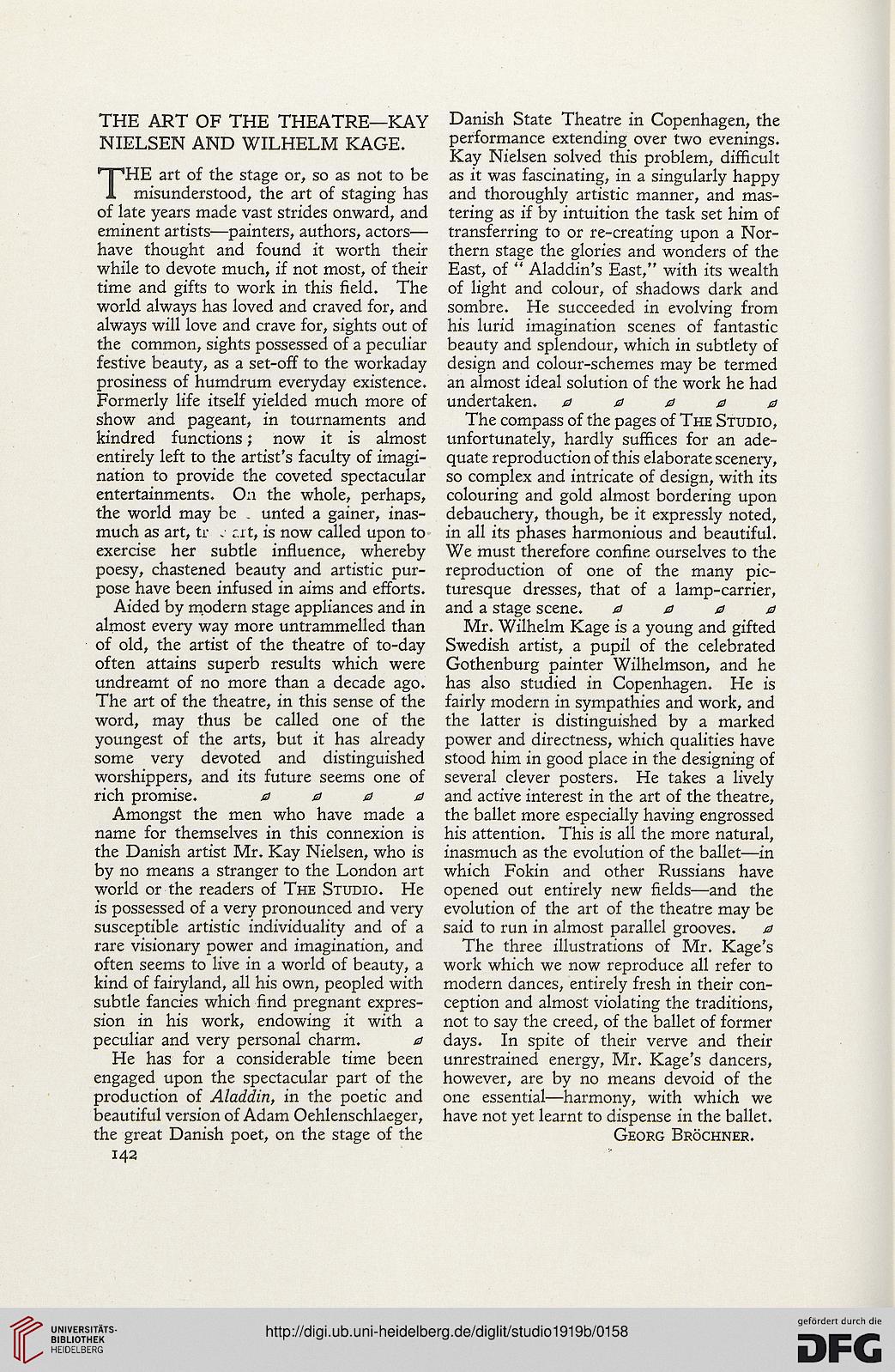 Information about OCR text
THE ART OF THE THEATRE—KAY
NIELSEN AND WILHELM KAGE.

THE art of the stage or, so as not to be
misunderstood, the art of staging has
of late years made vast strides onward, and
eminent artists—painters, authors, actors—
have thought and found it worth their
while to devote much, if not most, of their
time and gifts to work in this field. The
world always has loved and craved for, and
always will love and crave for, sights out of
the common, sights possessed of a peculiar
festive beauty, as a set-off to the workaday
prosiness of humdrum everyday existence.
Formerly life itself yielded much more of
show and pageant, in tournaments and
kindred functions; now it is almost
entirely left to the artist's faculty of imagi-
nation to provide the coveted spectacular
entertainments. On the whole, perhaps,
the world may be . unted a gainer, inas-
much as art, tr . art, is now called upon to
exercise her subtle influence, whereby
poesy, chastened beauty and artistic pur-
pose have been infused in aims and efforts.

Aided by modern stage appliances and in
almost every way more untrammelled than
of old, the artist of the theatre of to-day
often attains superb results which were
undreamt of no more than a decade ago.
The art of the theatre, in this sense of the
word, may thus be called one of the
youngest of the arts, but it has already
some very devoted and distinguished
worshippers, and its future seems one of
rich promise. 0000

Amongst the men who have made a
name for themselves in this connexion is
the Danish artist Mr. Kay Nielsen, who is
by no means a stranger to the London art
world or the readers of The Studio. He
is possessed of a very pronounced and very
susceptible artistic individuality and of a
rare visionary power and imagination, and
often seems to live in a world of beauty, a
kind of fairyland, all his own, peopled with
subtle fancies which find pregnant expres-
sion in his work, endowing it with a
peculiar and very personal charm. 0
He has for a considerable time been
engaged upon the spectacular part of the
production of Aladdin, in the poetic and
beautiful version of Adam Oehlenschlaeger,
the great Danish poet, on the stage of the
142

Danish State Theatre in Copenhagen, the
performance extending over two evenings.
Kay Nielsen solved this problem, difficult
as it was fascinating, in a singularly happy
and thoroughly artistic manner, and mas-
tering as if by intuition the task set him of
transferring to or re-creating upon a Nor-
thern stage the glories and wonders of the
East, of “ Aladdin's East,” with its wealth
of light and colour, of shadows dark and
sombre. He succeeded in evolving from
his lurid imagination scenes of fantastic
beauty and splendour, which in subtlety of
design and colour-schemes may be termed
an almost ideal solution of the work he had
undertaken. 00000
The compass of the pages of The Studio,
unfortunately, hardly suffices for an ade-
quate reproduction of this elaborate scenery,
so complex and intricate of design, with its
colouring and gold almost bordering upon
debauchery, though, be it expressly noted,
in all its phases harmonious and beautiful.
We must therefore confine ourselves to the
reproduction of one of the many pic-
turesque dresses, that of a lamp-carrier,
and a stage scene. 0000
Mr. Wilhelm Kage is a young and gifted
Swedish artist, a pupil of the celebrated
Gothenburg painter Wilhelmson, and he
has also studied in Copenhagen. He is
fairly modern in sympathies and work, and
the latter is distinguished by a marked
power and directness, which qualities have
stood him in good place in the designing of
several clever posters. He takes a lively
and active interest in the art of the theatre,
the ballet more especially having engrossed
his attention. This is all the more natural,
inasmuch as the evolution of the ballet—in
which Fokin and other Russians have
opened out entirely new fields—and the
evolution of the art of the theatre may be
said to run in almost parallel grooves. 0
The three illustrations of Mr. Kage's
work which we now reproduce all refer to
modern dances, entirely fresh in their con-
ception and almost violating the traditions,
not to say the creed, of the ballet of former
days. In spite of their verve and their
unrestrained energy, Mr. Kage's dancers,
however, are by no means devoid of the
one essential—harmony, with which we
have not yet learnt to dispense in the ballet.