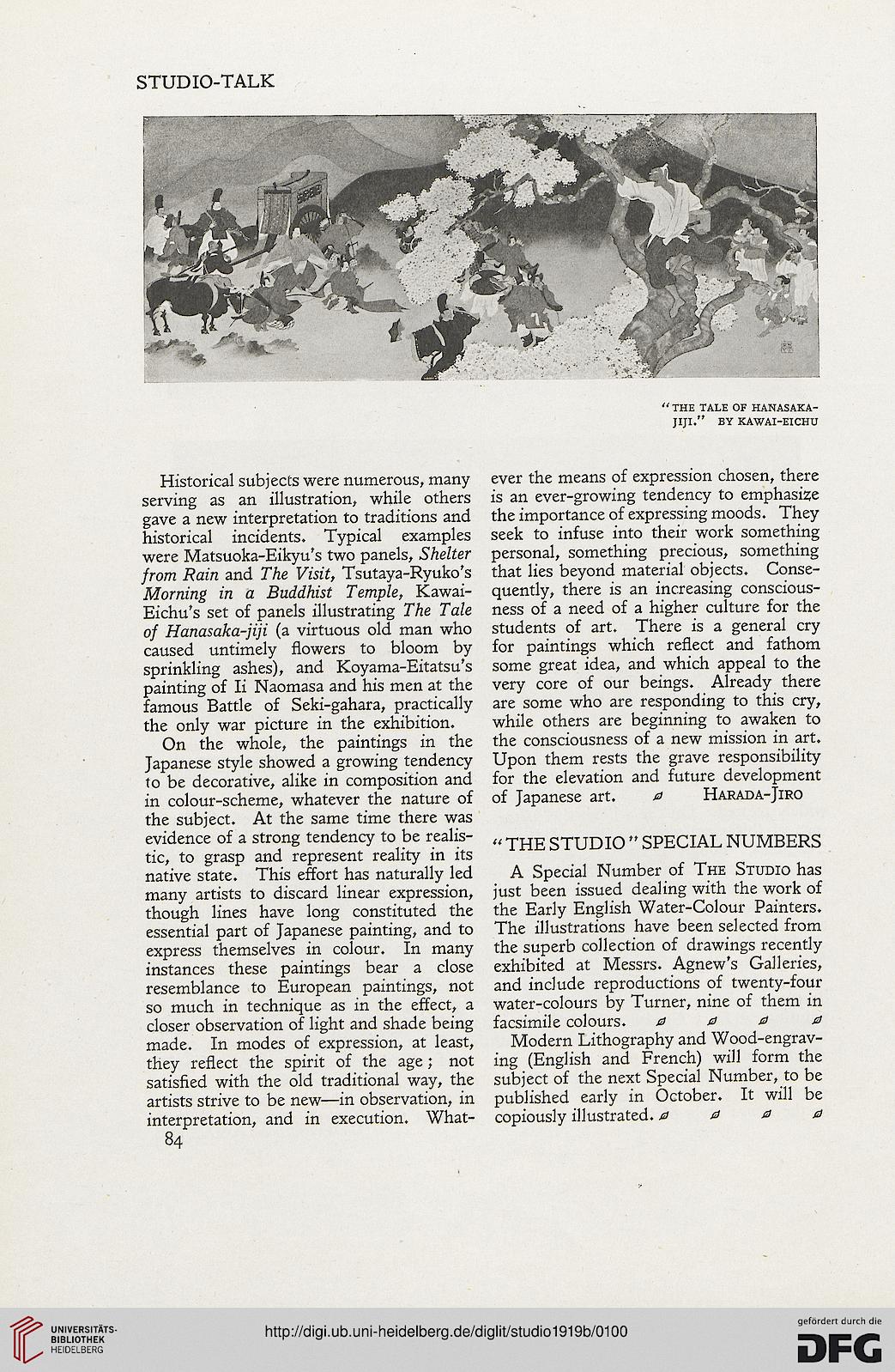 “ THE TALE OF HANASAKA-
JIJI.” BY KAWAI-EICHU

Historical subjects were numerous, many
serving as an illustration, while others
gave a new interpretation to traditions and
historical incidents. Typical examples
were Matsuoka-Eikyu's two panels. Shelter
from Rain and The Visit, Tsutaya-Ryuko's
Morning in a Buddhist Temple, Kawai-
Eichu’s set of panels illustrating The Tale
of Hanasaka-jiji (a virtuous old man who
caused untimely flowers to bloom by
sprinkling ashes), and Koyama-Eitatsu's
painting of Ii Naomasa and his men at the
famous Battle of Seki-gahara, practically
the only war picture in the exhibition.

On the whole, the paintings in the
Japanese style showed a growing tendency
to be decorative, alike in composition and
in colour-scheme, whatever the nature of
the subject. At the same time there was
evidence of a strong tendency to be realis-
tic, to grasp and represent reality in its
native state. This effort has naturally led
many artists to discard linear expression,
though lines have long constituted the
essential part of Japanese painting, and to
express themselves in colour. In many
instances these paintings bear a close
resemblance to European paintings, not
so much in technique as in the effect, a
closer observation of light and shade being
made. In modes of expression, at least,
they reflect the spirit of the age; not
satisfied with the old traditional way, the
artists strive to be new—in observation, in
interpretation, and in execution. What-

ever the means of expression chosen, there
is an ever-growing tendency to emphasize
the importance of expressing moods. They
seek to infuse into their work something
personal, something precious, something
that lies beyond material objects. Conse-
quently, there is an increasing conscious-
ness of a need of a higher culture for the
students of art. There is a general cry
for paintings which reflect and fathom
some great idea, and which appeal to the
very core of our beings. Already there
are some who are responding to this cry,
while others are beginning to awaken to
the consciousness of a new mission in art.
Upon them rests the grave responsibility
for the elevation and future development
of Japanese art. a Harada-Jiro

A Special Number of The Studio has
just been issued dealing with the work of
the Early English Water-Colour Painters.
The illustrations have been selected from
the superb collection of drawings recently
exhibited at Messrs. Agnew’s Galleries,
and include reproductions of twenty-four
water-colours by Turner, nine of them in
facsimile colours. a 0 a a

Modern Lithography and Wood-engrav-
ing (English and French) will form the
subject of the next Special Number, to be
published early in October. It will be
copiously illustrated, a a a a