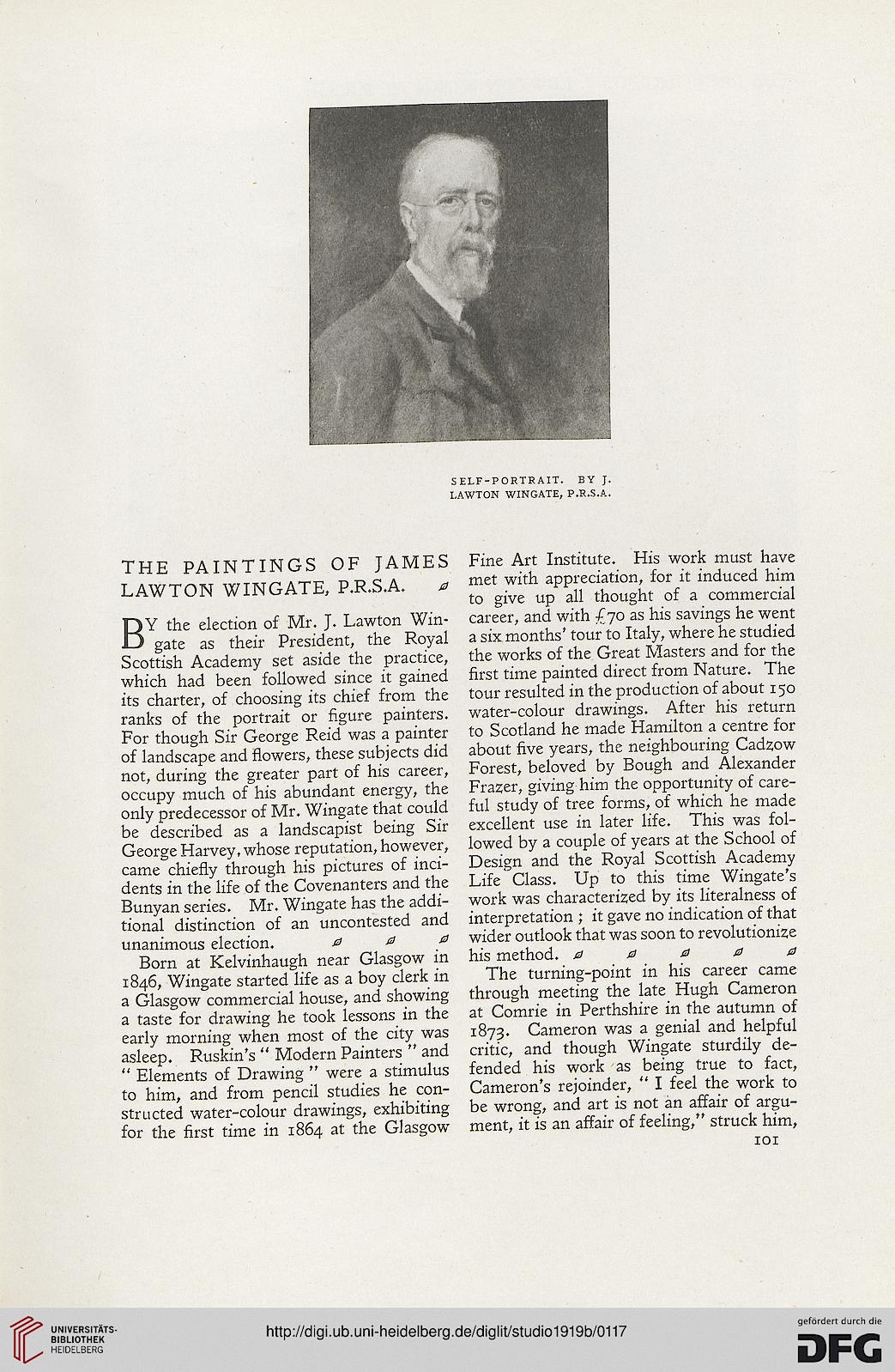 THE PAINTINGS OF JAMES
LAWTON WINGATE, P.R.S.A. a

BY the election of Mr. J. Lawton Win-
gate as their President, the Royal
Scottish Academy set aside the practice,
which had been followed since it gained
its charter, of choosing its chief from the
ranks of the portrait or figure painters.
For though Sir George Reid was a painter
of landscape and flowers, these subjects did
not, during the greater part of his career,
occupy much of his abundant energy, the
only predecessor of Mr. Wingate that could
be described as a landscapist being Sir
George Harvey, whose reputation, however,
came chiefly through his pictures of inci-
dents in the life of the Covenanters and the
Bunyan series. Mr. Wingate has the addi-
tional distinction of an uncontested and
unanimous election. a e> a

Born at Kelvinhaugh near Glasgow in
1846, Wingate started life as a boy clerk in
a Glasgow commercial house, and showing
a taste for drawing he took lessons in the
early morning when most of the city was
asleep. Ruskin’s “ Modern Painters ” and
“ Elements of Drawing ” were a stimulus
to him, and from pencil studies he con-
structed water-colour drawings, exhibiting
for the first time in 1864 at the Glasgow

Fine Art Institute. His work must have
met with appreciation, for it induced him
to give up all thought of a commercial
career, and with £70 as his savings he went
a six months' tour to Italy, where he studied
the works of the Great Masters and for the
first time painted direct from Nature. The
tour resulted in the production of about 150
water-colour drawings. After his return
to Scotland he made Hamilton a centre for
about five years, the neighbouring Cadzow
Forest, beloved by Bough and Alexander
Frazer, giving him the opportunity of care-
ful study of tree forms, of which he made
excellent use in later life. This was fol-
lowed by a couple of years at the School of
Design and the Royal Scottish Academy
Life Class. Up to this time Wingate’s
work was characterized by its literalness of
interpretation ; it gave no indication of that
wider outlook that was soon to revolutionize
his method, a a a a a
The turning-point in his career came
through meeting the late Hugh Cameron
at Comrie in Perthshire in the autumn of
1873. Cameron was a genial and helpful
critic, and though Wingate sturdily de-
fended his work as being true to fact,
Cameron’s rejoinder, “ I feel the work to
be wrong, and art is not an affair of argu-
ment, it is an affair of feeling,” struck him,