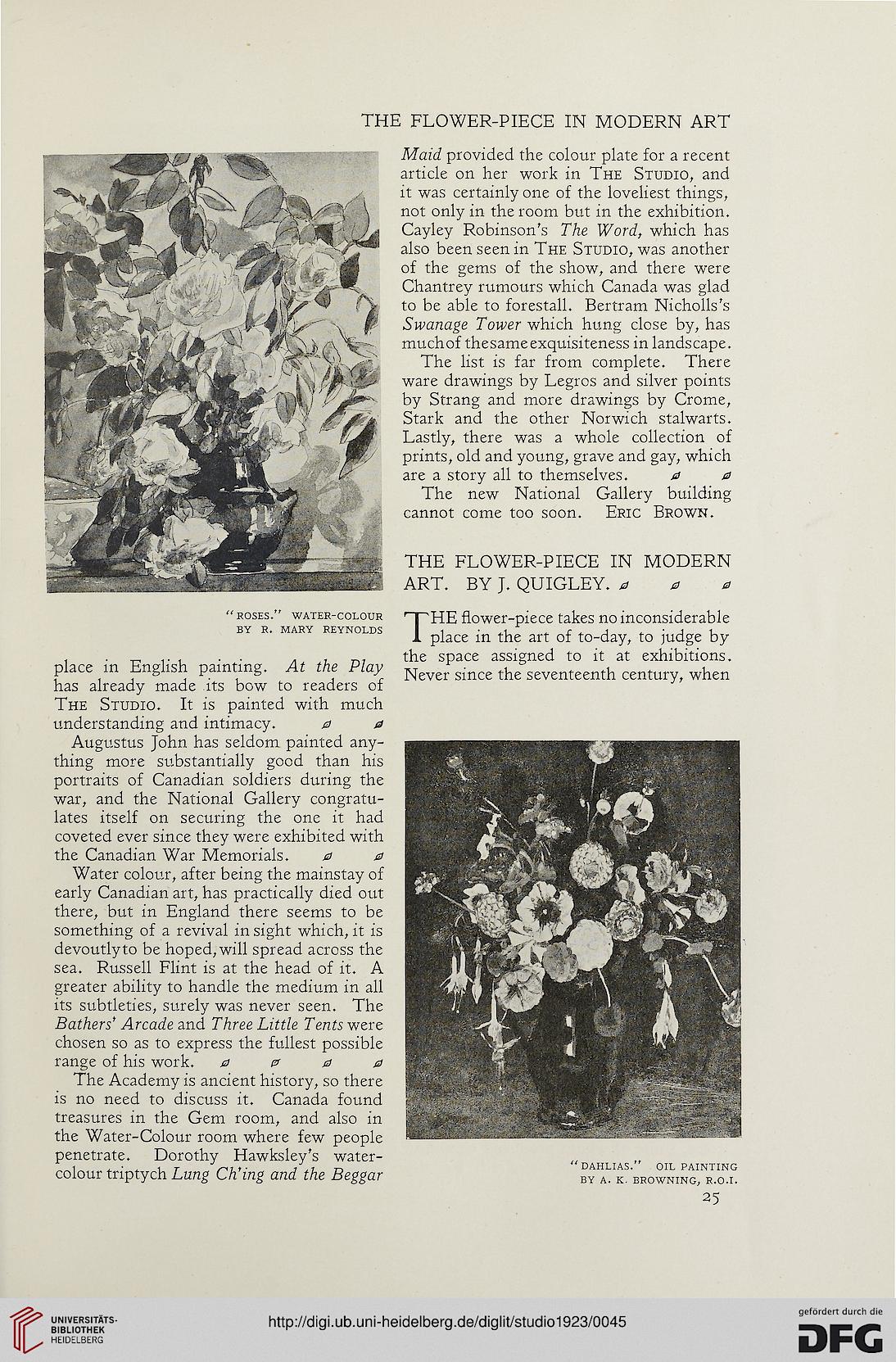 Information about OCR text
THE FLOWER-PIECE IN MODERN ART

place in English painting. At the Play
has already made its bow to readers of
The Studio. It is painted with much
understanding and intimacy. 0 0

Augustus John has seldom painted any-
thing more substantially good than his
portraits of Canadian soldiers during the
war, and the National Gallery congratu-
lates itself on securing the one it had
coveted ever since they were exhibited with
the Canadian War Memorials. 0 0

Water colour, after being the mainstay of
early Canadian art, has practically died out
there, but in England there seems to be
something of a revival in sight which, it is
devoutly to be hoped, will spread across the
sea. Russell Flint is at the head of it. A
greater ability to handle the medium in all
its subtleties, surely was never seen. The
Bathers’ Arcade and Three Little Tents were
chosen so as to express the fullest possible
range of his work. 0000
The Academy is ancient history, so there
is no need to discuss it. Canada found
treasures in the Gem room, and also in
the Water-Colour room where few people
penetrate. Dorothy Hawksley’s water-
colour triptych Lang Ch’ing and the Beggar

Maid provided the colour plate for a recent
article on her work in The Studio, and
it was certainly one of the loveliest things,
not only in the room but in the exhibition.
Cayley Robinson's The Word, which has
also been seen in The Studio, was another
of the gems of the show, and there were
Chantrey rumours which Canada was glad
to be able to forestall. Bertram Nicholls's
Swanage Tower which hung close by, has
muchof thesameexquisiteness in landscape.

The list is far from complete. There
ware drawings by Legros and silver points
by Strang and more drawings by Crome,
Stark and the other Norwich stalwarts.
Lastly, there was a whole collection of
prints, old and young, grave and gay, which
are a story all to themselves. 0 0

THE FLOWER-PIECE IN MODERN
ART. BY J. QUIGLEY. 000

THE flower-piece takes no inconsiderable
place in the art of to-day, to judge by
the space assigned to it at exhibitions.
Never since the seventeenth century, when