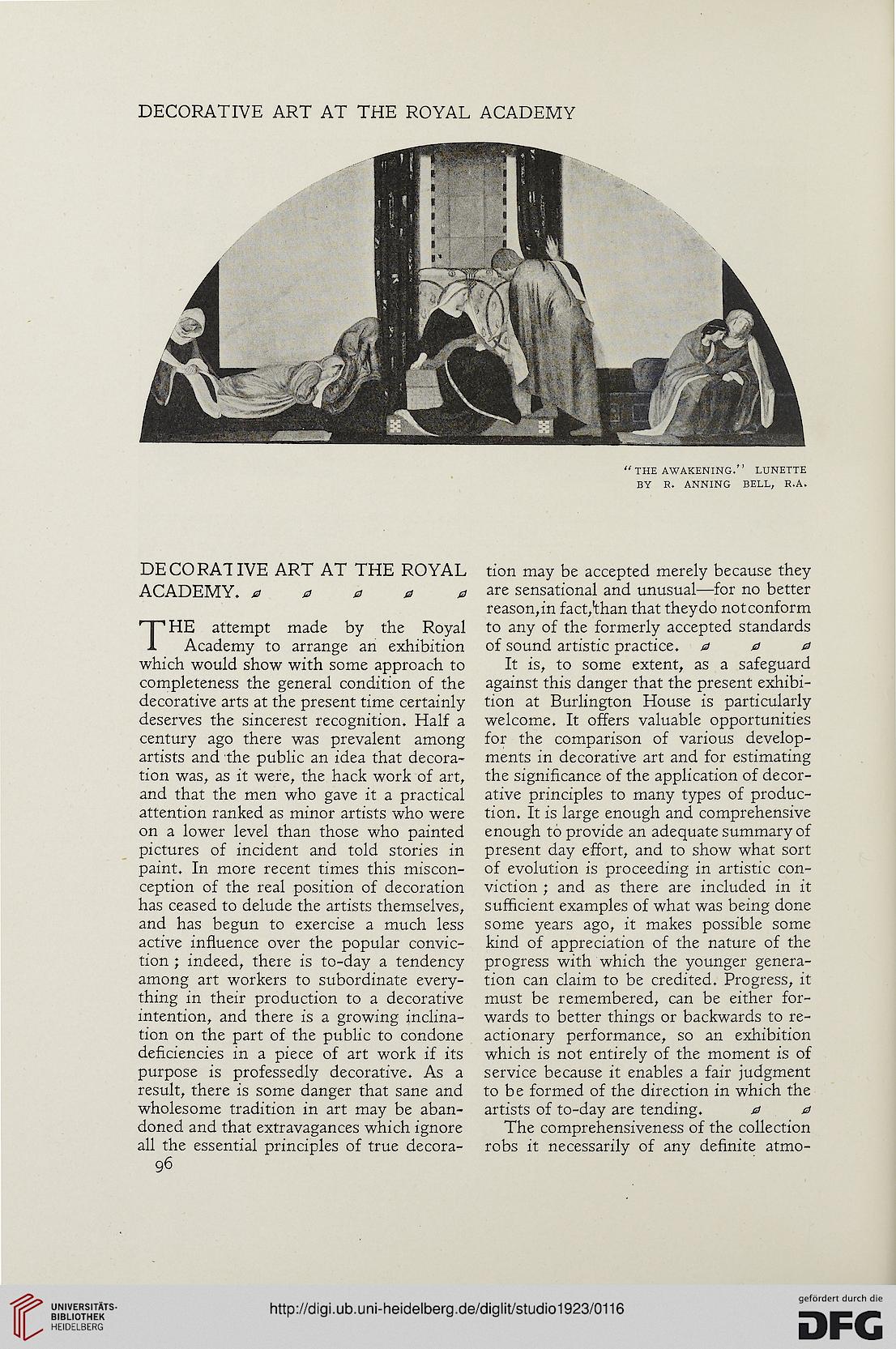 Information about OCR text
DECORATIVE ART AT THE ROYAL ACADEMY

THE attempt made by the Royal
Academy to arrange an exhibition
which would show with some approach to
completeness the general condition of the
decorative arts at the present time certainly
deserves the sincerest recognition. Half a
century ago there was prevalent among
artists and the public an idea that decora-
tion was, as it were, the hack work of art,
and that the men who gave it a practical
attention ranked as minor artists who were
on a lower level than those who painted
pictures of incident and told stories in
paint. In more recent times this miscon-
ception of the real position of decoration
has ceased to delude the artists themselves,
and has begun to exercise a much less
active influence over the popular convic-
tion ; indeed, there is to-day a tendency
among art workers to subordinate every-
thing in their production to a decorative
intention, and there is a growing inclina-
tion on the part of the public to condone
deficiencies in a piece of art work if its
purpose is professedly decorative. As a
result, there is some danger that sane and
wholesome tradition in art may be aban-
doned and that extravagances which ignore
all the essential principles of true decora-
96

tion may be accepted merely because they
are sensational and unusual—for no better
reason,in fact^han that theydo notconform
to any of the formerly accepted standards
of sound artistic practice. 000
It is, to some extent, as a safeguard
against this danger that the present exhibi-
tion at Burlington House is particularly
welcome. It offers valuable opportunities
for the comparison of various develop-
ments in decorative art and for estimating
the significance of the application of decor-
ative principles to many types of produc-
tion. It is large enough and comprehensive
enough to provide an adequate summary of
present day effort, and to show what sort
of evolution is proceeding in artistic con-
viction ; and as there are included in it
sufficient examples of what was being done
some years ago, it makes possible some
kind of appreciation of the nature of the
progress with which the younger genera-
tion can claim to be credited. Progress, it
must be remembered, can be either for-
wards to better things or backwards to re-
actionary performance, so an exhibition
which is not entirely of the moment is of
service because it enables a fair judgment
to be formed of the direction in which the
artists of to-day are tending. 0 0