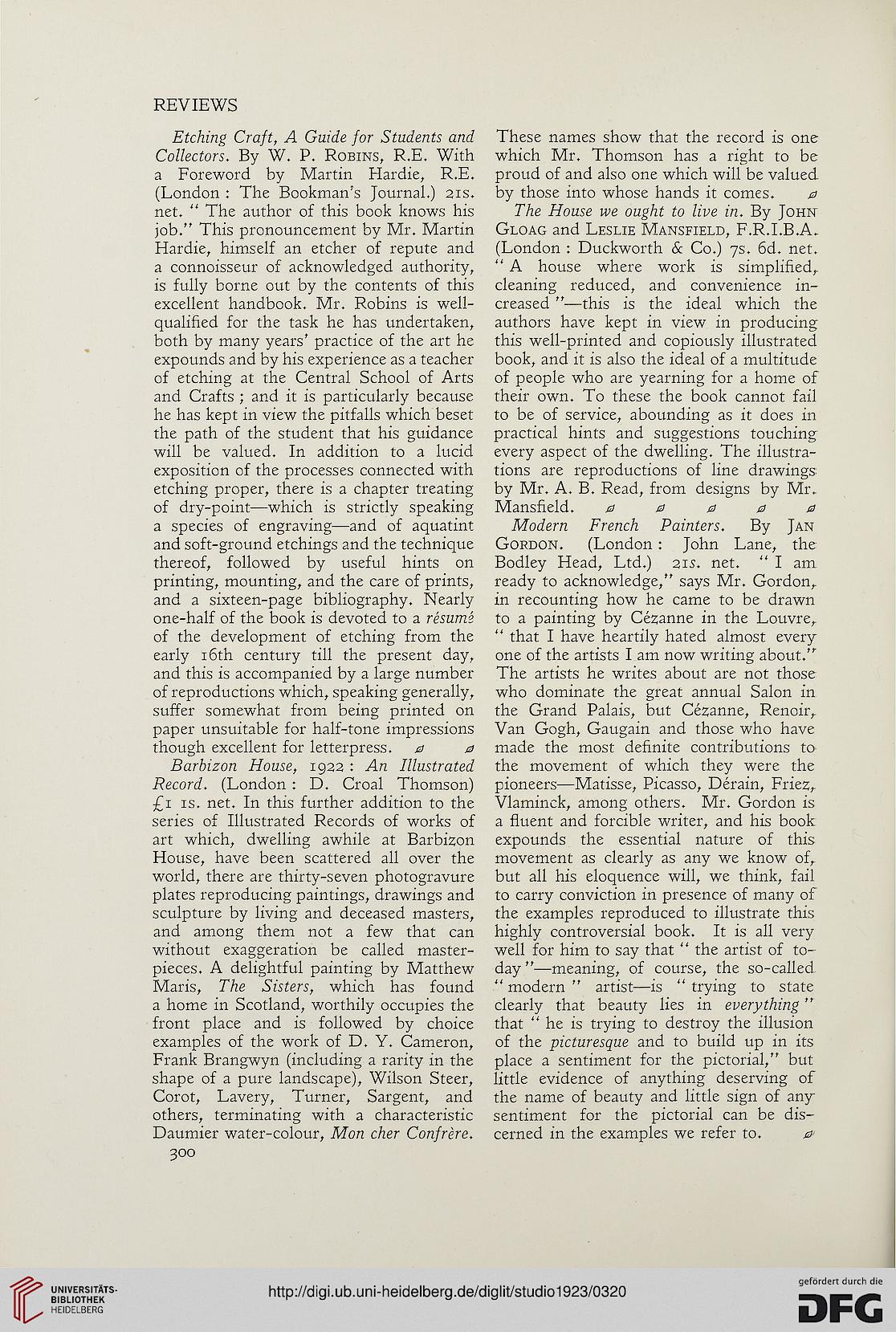 Etching Craft, A Guide for Students and
Collectors. By W. P. Robins, R.E. With
a Foreword by Martin Hardie, R.E.
(London : The Bookman's Journal.) 21s.
net. u The author of this book knows his
job." This pronouncement by Mr. Martin
Hardie, himself an etcher of repute and
a connoisseur of acknowledged authority,
is fully borne out by the contents of this
excellent handbook. Mr. Robins is well-
qualified for the task he has undertaken,
both by many years' practice of the art he
expounds and by his experience as a teacher
of etching at the Central School of Arts
and Crafts ; and it is particularly because
he has kept in view the pitfalls which beset
the path of the student that his guidance
will be valued. In addition to a lucid
exposition of the processes connected with
etching proper, there is a chapter treating
of dry-point—which is strictly speaking
a species of engraving—and of aquatint
and soft-ground etchings and the technique
thereof, followed by useful hints on
printing, mounting, and the care of prints,
and a sixteen-page bibliography. Nearly
one-half of the book is devoted to a resume
of the development of etching from the
early 16th century till the present day,
and this is accompanied by a large number
of reproductions which, speaking generally,
suffer somewhat from being printed on
paper unsuitable for half-tone impressions
though excellent for letterpress, 0 0

Barbizon House, 1922: An Illustrated
Record. (London : D. Croal Thomson)
£1 is. net. In this further addition to the
series of Illustrated Records of works of
art which, dwelling awhile at Barbizon
House, have been scattered all over the
world, there are thirty-seven photogravure
plates reproducing paintings, drawings and
sculpture by living and deceased masters,
and among them not a few that can
without exaggeration be called master-
pieces. A delightful painting by Matthew
Maris, The Sisters, which has found
a home in Scotland, worthily occupies the
front place and is followed by choice
examples of the work of D. Y. Cameron,
Frank Brangwyn (including a rarity in the
shape of a pure landscape), Wilson Steer,
Corot, Lavery, Turner, Sargent, and
others, terminating with a characteristic
Daumier water-colour, Mon cher Confrere.

These names show that the record is one
which Mr. Thomson has a right to be
proud of and also one which will be valued
by those into whose hands it comes. 0
The House we ought to live in. By John
Gloag and Leslie Mansfield, F.R.I.B.A.
(London : Duckworth & Co.) 7s. 6d. net.
“ A house where work is simplified,
cleaning reduced, and convenience in-
creased "—this is the ideal which the
authors have kept in view in producing
this well-printed and copiously illustrated
book, and it is also the ideal of a multitude
of people who are yearning for a home of
their own. To these the book cannot fail
to be of service, abounding as it does in
practical hints and suggestions touching
every aspect of the dwelling. The illustra-
tions are reproductions of line drawings
by Mr. A. B. Read, from designs by Mr.
Mansfield. 00000
Modern French Painters. By Jan
Gordon. (London : John Lane, the

Bodley Head, Ltd.) 21 s. net. “ I am
ready to acknowledge," says Mr. Gordon,
in recounting how he came to be drawn
to a painting by Cezanne in the Louvre,
** that I have heartily hated almost every
one of the artists I am now writing about."
The artists he writes about are not those
who dominate the great annual Salon in
the Grand Palais, but Cezanne, Renoir,
Van Gogh, Gaugain and those who have
made the most definite contributions to
the movement of which they were the
pioneers—Matisse, Picasso, Derain, Friez,
Vlaminck, among others. Mr. Gordon is
a fluent and forcible writer, and his book
expounds the essential nature of this
movement as clearly as any we know of,
but all his eloquence will, we think, fail
to carry conviction in presence of many of
the examples reproduced to illustrate this
highly controversial book. It is all very
well for him to say that “ the artist of to-
day "—meaning, of course, the so-called
" modern " artist—is “ trying to state
clearly that beauty lies in everything "
that ** he is trying to destroy the illusion
of the picturesque and to build up in its
place a sentiment for the pictorial," but
little evidence of anything deserving of
the name of beauty and little sign of any
sentiment for the pictorial can be dis-
cerned in the examples we refer to. 0