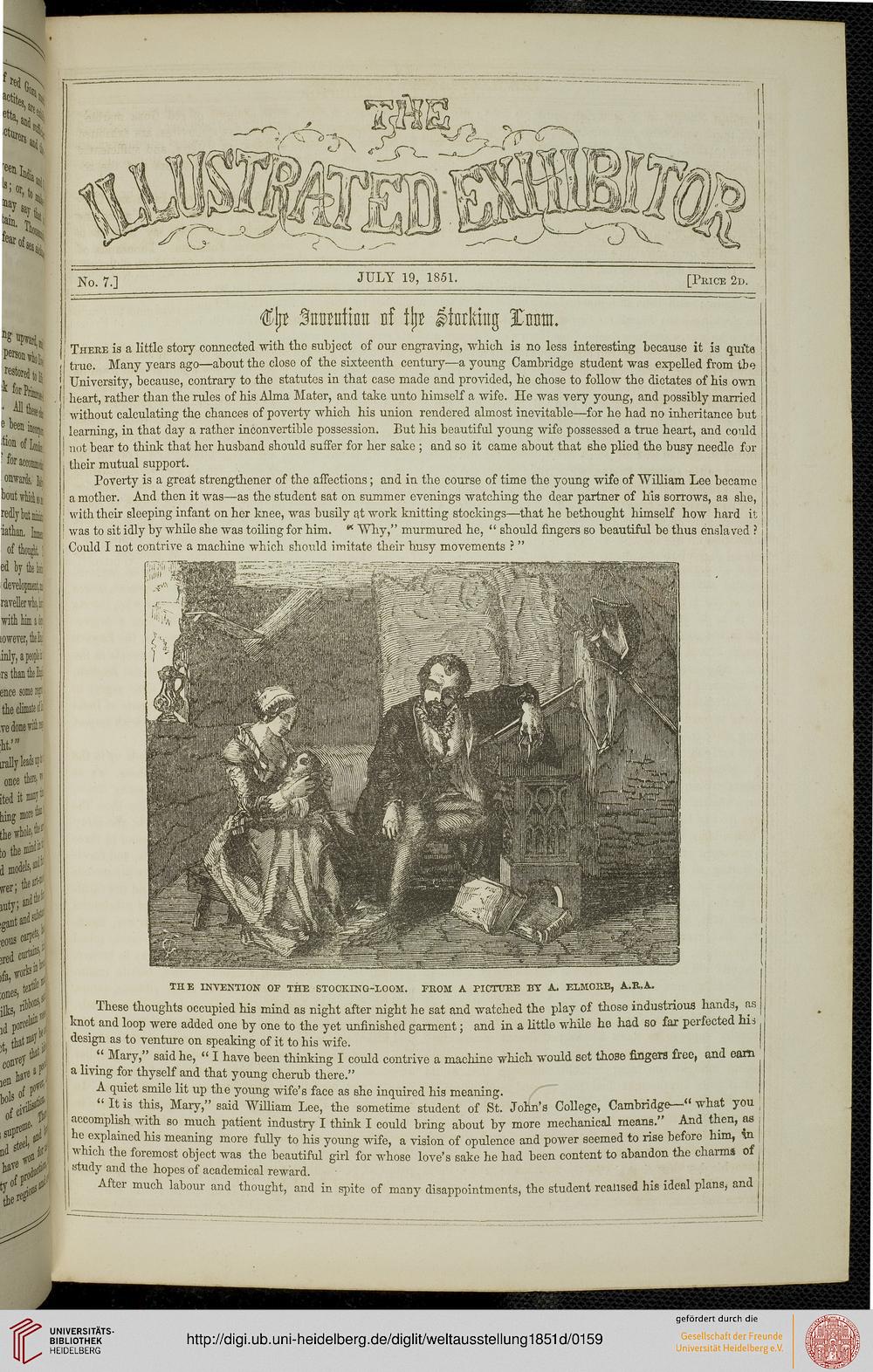 There is a little story connected with the subject of our engraving, which is no less interesting because it is quite
true. Many years ago—about the close of the sixteenth century—a young Cambridge student was expelled from the
University, because, contrary to the statutes in that case made and provided, he chose to follow the dictates of his own
heart, rather than the rules of his Alma Mater, and take unto himself a wife. He was very young, and possibly married
without calculating the chances of poverty which his union rendered almost inevitable—for he had no inheritance but
learning, in that day a rather inconvertible possession. But his beautiful young wife possessed a true heart, and could
not bear to think that her husband should suffer for her sake ; and so it came about that she plied the busy needle for
their mutual support.

Poverty is a great strengthener of the affections; and in the course of time the young wife of "William Lee became
a mother. And then it was—as the student sat on summer evenings watching the dear partner of his sorrows, as she,
with their sleeping infant on her knee, was busily at work knitting stockings—that he bethought himself how hard it
was to sit idly by while she was toiling for him. K Why," murmured he, " should fingers so beautiful be thus enslaved ?
Could I not contrive a machine which should imitate their busy movements ? "

THE INVENTION OP THE STOCKING-LOOM. FROM A PICTURE BY A. ELMORE, A.R.A.

These thoughts occupied his mind as night after night he sat and watched the play of those industrious hands, as
knot and loop were added one by one to the yet unfinished garment; and in a little while he had so far perfected his
design as to venture on speaking of it to his wife.

li Mary," said he, " I have been thinking I could contrive a machine which would set those fingers free, and earn
a living for thyself and that young cherub there."

A quiet smile lit up the young wife's face as she inquired his meaning.

" It is this, Mary," said William Lee, the sometime student of St. John's College, Cambridge—" what you
accomplish with so much patient industry I think I could bring about by more mechanical means." And then, as
he explained his meaning more fully to his young wife, a vision of opulence and power seemed to rise before him, \n
which the foremost object was the beautiful girl for whose love's sake he had been content to abandon the charms of
study and the hopes of academical reward.

After much labour and thought, and in spite of many disappointments, the student realised his ideal plans* and