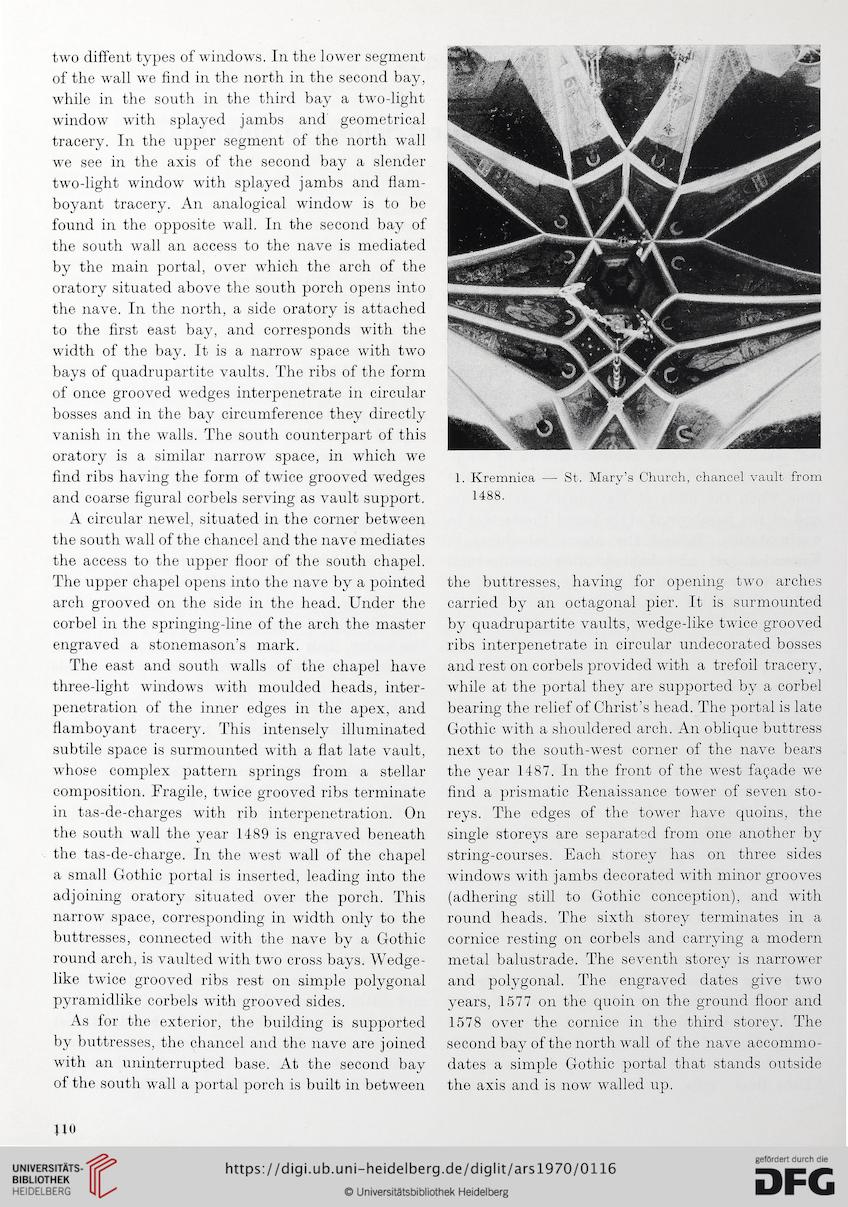 Information about OCR text
two diffent types of Windows. In the lower segment
of the wall we find in the north in the second bay,
while in the south in the third bay a two-light
window with splayed jambs and geometrical
tracery. In the upper segment of the north wall
we see in the axis of the second bay a slender
two-light window with splayed jambs and flam-
boyant tracery. An analogical window is to be
found in the opposite wall. In the second bay of
the south wall an access to the nave is mediated
by the main portal, over which the arch of the
orátory situated above the south poreh opens into
the nave. In the north, a side orátory is attached
to the first east bay, and corresponds with the
width of the bay. It is a narrow space with two
bays of quadrupartite vaults. The ribs of the form
of once grooved wedges interpenetrate in circular
bosses and in the bay circumference they directly
vanish in the walls. The south counterpart of this
orátory is a similar narrow space, in which we
find ribs having the form of twice grooved wedges
and coarse figural corbels serving as vault support.
A circular newel, situated in the corner between
the south wall of the chancel and the nave médiates
the access to the upper floor of the south chapel.
The upper chapel opens into the nave by a pointed
arch grooved on the side in the head. Under the
corbel in the springing-line of the arch the master
engraved a stonemason’s mark.
The east and south walls of the chapel have
three-light Windows with moulded heads, inter-
pénétration of the inner edges in the apex, and
flamboyant tracery. This intensely illuminated
subtile space is surmounted with a flat late vault,
whose complex pattern springs from a stellar
composition. Fragile, twice grooved ribs terminate
in tas-de-charges with rib interpénétration. On
the south wall the year 1489 is engraved beneath
the tas-de-charge. In the west wall of the chapel
a small Gothic portal is inserted, leading into the
adjoining orátory situated over the porch. This
narrow space, corresponding in width only to the
buttresses, connected with the nave by a Gothic
round arch, is vaulted with two cross bays. Wedge-
like twice grooved ribs rest on simple polygonal
pyramidlike corbels with grooved sides.
As for the exterior, the building is supported
by buttresses, the chancel and the nave are joined
with an uninterrupted base. At the second bay
of the south wall a portal porch is built in between

the buttresses, having for opening two arches
carried by an octagonal pier. It is surmounted
by quadrupartite vaults, wedge-like twice grooved
ribs interpenetrate in circular undecorated bosses
and rest on corbels provided with a trefoil tracery,
while at the portal they are supported by a corbel
bearing the relief of Christ’s head. The portal is late
Gothic with a shouldered arch. An oblique buttress
next to the south-west corner of the nave bears
the year 1487. In the front of the west façade we
find a prismatic Renaissance tower of seven sto-
reys. The edges of the tower have quoins, the
single storeys are separated from one another by
string-courses. Each storey has on three sides
Windows with jambs decorated with minor grooves
(adhering still to Gothic conception), and with
round heads. The sixth storey terminâtes in a
cornice resting on corbels and carrying a modern
metal balustrade. The seventh storey is narrower
and polygonal. The engraved dates give two
years, 1577 on the quoin on the ground floor and
1578 over the cornice in the third storey. The
second bay of the north wall of the nave accommo-
dâtes a simple Gothic portal that stands outside
the axis and is now walled up.