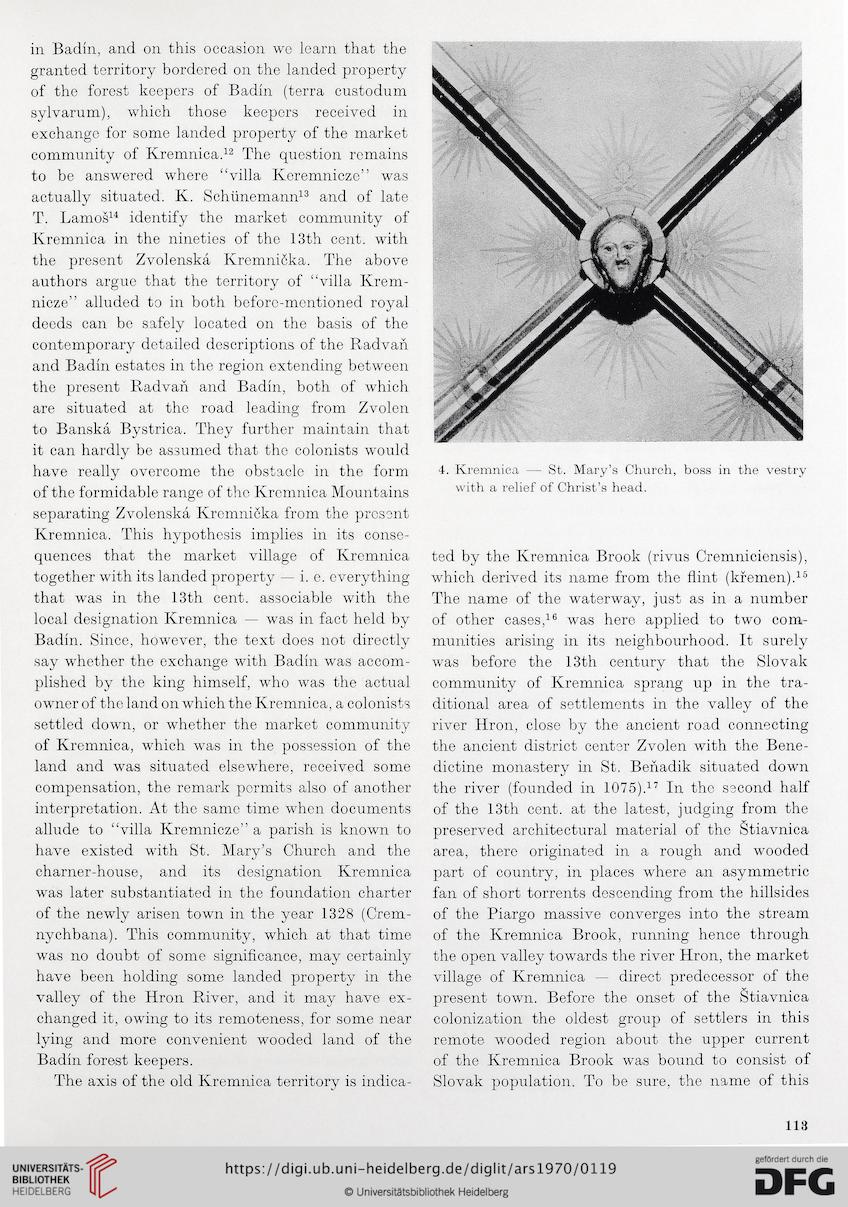 Hinweise zum OCR-Text
in Badin, and on this occasion wo learn that the
granted territory bordcred on the landed property
of the forest kcepcrs of Badin (terra custodum
sylvarum), which those keepors received in
exchange for some landed property of the market
community of Kremnica.12 The question romains
to be answered where “villa Keremnicze” was
actually situated. K. Schünemann13 and of late
T. Lamos14 identify the market community of
Kremnica in the nineties of the 13th cent, with
the present Zvolenská KremniČka. The above
authors argue that the territory of “villa Krem-
nicze” alluded to in both beforo-mcntioned royal
deeds can be safely located on the basis of the
Contemporary detailed descriptions of the Radvaň
and Badin estâtes in the region extending between
the present Radvaň and Badin, both of which
are situated at tho road leading from Zvolen
to Banská Bystrica. They further maintain that
it can hardly be assumed that tho colonists would
hâve really overcome the obstacle in the form
of the formidable range of tho Kremnica Mountains
separating Zvolenská KremniČka from the present
Kremnica. This hypothesis implies in its consé-
quences that the market village of Kremnica
together with its landed property — i. c. overything
that was in the 13th cent, associable with the
local désignation Kremnica — was in fact held by
Badin. Since, however, the text does not directly
say whether the exchange with Badin was accom-
plished by the king himself, who was the actual
owner of tho land on which the Kremnica, a colonists
settled down, or whether the market community
of Kremnica, which was in the possession of the
land and was situated elsewhere, received some
compensation, the remark pcrmits also of another
interprétation. At the samo time whcn documents
ahnde to “villa Kremnicze” a parish is known to
have existed with St. Mary’s Church and the
charner-house, and its désignation Kremnica
was later substantiated in the foundation charter
of the newly arisen town in the year 1328 (Crem-
ny chbana). This community, which at that time
was no doubt of some significance, may certainly
have becn holding some landed property in the
valley of the Hron River, and it may have ex-
changed it, owing to its remoteness, for some near
lying and more convenient wooded land of the
Badin forest keepers.
The axis of the old Kremnica territory is indica-


4. Kremnica — St. Mary’s Church, boss in the vestry
with a relief of Christ’s head.

ted by the Kremnica Brook (rivus Cremniciensis),
which derived its name from the flint (křemen).15
The name of the waterway, just as in a number
of other cases,16 was hero applied to two com-
munities arising in its neighbourhood. It surely
was before the 13th Century that the Slovák
community of Kremnica sprang up in the tra-
ditional area of Settlements in the valley of the
river Hron, close by the ancient road connecting
the ancient district center Zvolen with the Béné-
dictine monastery in St. Beňadik situated down
the river (founded in 1075).17 In tho second half
of the 13th cent, at the latest, judging from the
preserved architectural material of the Štiavnica
area, there originated in a rough and wooded
part of country, in places where an asymmetric
fan of short torrents descending from the hillsides
of the Piargo massive converges into the stream
of the Kremnica Brook, running hence through
the open valley towards the river Hron, the market
village of Kremnica — direct predecessor of the
present town. Before the onset of the Štiavnica
colonization the oldest group of settlers in this
remote wooded region about the upper current
of the Kremnica Brook was bound to consist of
Slovák population. To be sure, the name of this