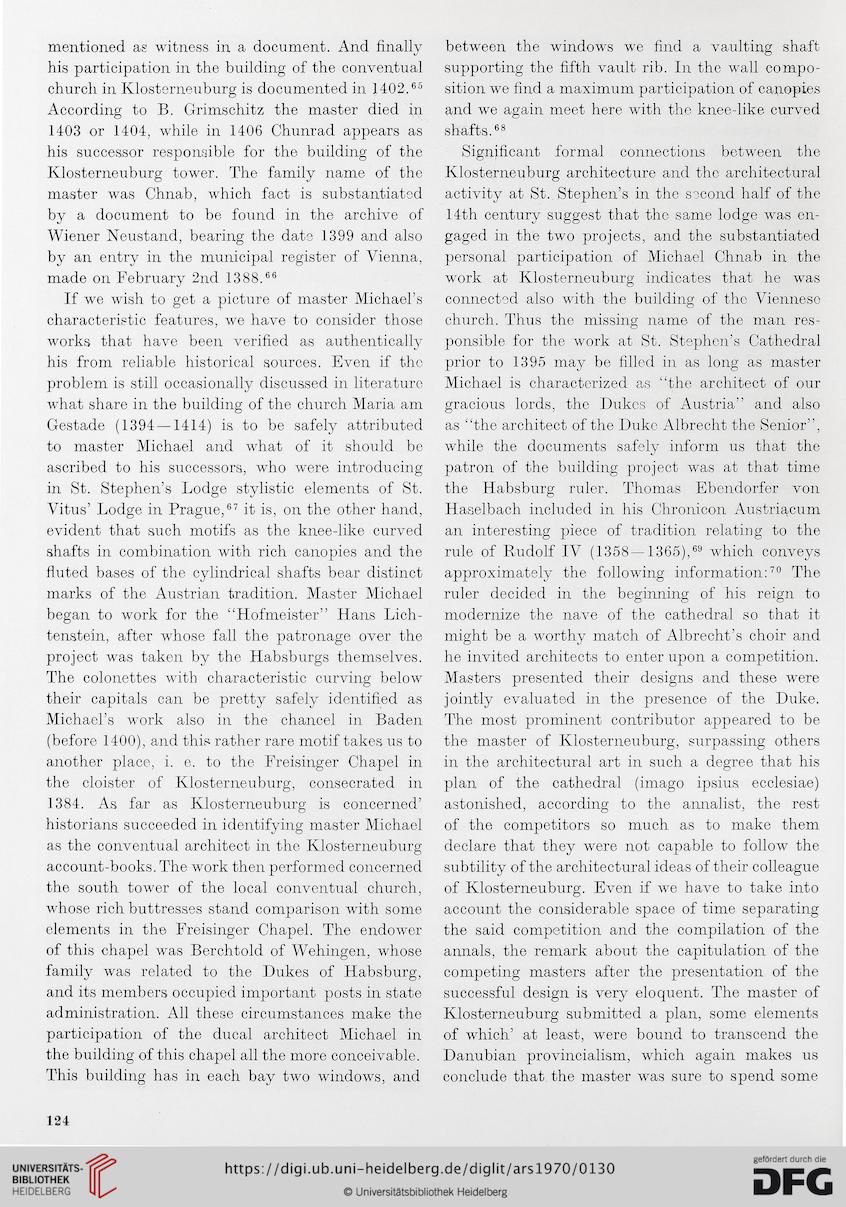 Information about OCR text
mentioned as witness in a document. And finally
his participation in the building of the conventual
church in Klosterneuburg is documented in 1402.63
According to B. Grimschitz the master died in
1403 or 1404, while in 1406 Chunrad appears as
his successor responsable for the building of the
Klosterneuburg tower. The family name of the
master was Chnab, which fact is substantiated
by a document to be found in the archive of
Wiener Neustand, bearing the date 1399 and also
by an entry in the municipal register of Vienna,
made on February 2nd 1388.66
If we wish to get a picture of master Michael’s
characteristic features, we hâve to consider those
works that hâve been vérifiée! as authentically
his from reliable historical sources. Even if the
problém is still occasionally discussed in literaturo
what share in the building of the church Maria am
Gestade (1394 — 1414) is to be safely attributed
to master Michael and what of it should be
ascribed to his successors, who were introducing
in St. Stephen’s Lodge stylistic éléments of St.
Vitus’ Lodge in Prague,67 it is, on the other hand,
evident that such motifs as the knee-like curved
shafts in combination with rich canopies and the
fluted bases of the cylindrical shafts bear distinct
marks of the Austrian tradition. Master Michael
began to work for the “Hofmeister” Hans Lich-
tenstein, after whose fall the patronage over the
project was taken by the Habsburgs themselves.
The colonettes with characteristic curving below
their capitals can be pretty safely identified as
Michael’s work also in the chancel in Baden
(before 1400), and this rather rare motif takes us to
another place, i. e. to the Freisinger Chapel in
the cloister of Klosterneuburg, consecrated in
1384. As far as Klosterneuburg is concerned’
historians succeeded in identifying master Michael
as the conventual architect in the Klosterneuburg
account-books. The work then performed concerned
the south tower of the local conventual church,
whose rich buttresses stand comparison with some
éléments in the Freisinger Chapel. The endower
of this chapel was Berchtold of Wehingen, whose
family was related to the Dukes of Habsburg,
and its members occupied important posts in state
administration. Ail these circumstances make the
participation of the ducal architect Michael in
the building of this chapel ail the more conceivable.
This building has in each bay two Windows, and

between the Windows we find a vaulting shaft
supporting the fifth vault rib. In the wall compo-
sition we find a maximum participation of canopies
and we again meet here with the knee-like curved
shafts.68
Significant formai connections between the
Klosterneuburg architecture and the architectural
activity at St. Stephen’s in the second half of the
14th Century suggest that the same lodge was en-
gaged in the two projects, and the substantiated
personal participation of Michael Chnab in the
work at Klosterneuburg indicates that he was
connected also with the building of the Vienneso
church. Thus the missing name of the man res-
ponsible for the work at St. Stephen’s Cathédral
prior to 1395 may be filled in as long as master
Michael is characterized as “the architect of our
gracions lords, the Dukes of Austria” and also
as “the architect of the Duke Albrecht the Senior”,
while the documents safely inform us that the
patron of the building project was at that time
the Habsburg ruler. Thomas Ebendorfer von
Haselbach included in his Chronicon Austriacum
an inter esting piece of tradition relatin g to the
rule of Rudolf IV (1358—1365),69 which conveys
approximately the foliowing information:70 The
ruler decided in the beginning of his reign to
modernize the nave of the cathédral so that it
might be a worthy match of Albrecht’s choir and
he invited architects to enter upon a compétition.
Masters presented their designs and these were
jointly evaluated in the presence of the Duke.
The most prominent contributor appeared to be
the master of Klosterneuburg, surpassing others
in the architectural art in such a degree that his
plan of the cathédral (imago ipsius ecclesiae)
astonished, according to the annalist, the rest
of the competitors so much as to make them
déclaré that they were not capable to follow the
subtility of the architectural ideas of their colleague
of Klosterneuburg. Even if we hâve to take into
account the considérable space of time separating
the said compétition and the compilation of the
annals, the remark about the capitulation of the
competing masters after the présentation of the
successful design is very eloquent. The master of
Klosterneuburg submitted a plan, some éléments
of which’ at least, were bound to transcend the
Danubian provincialism, which again makes us
conclude that the master was sure to spend some