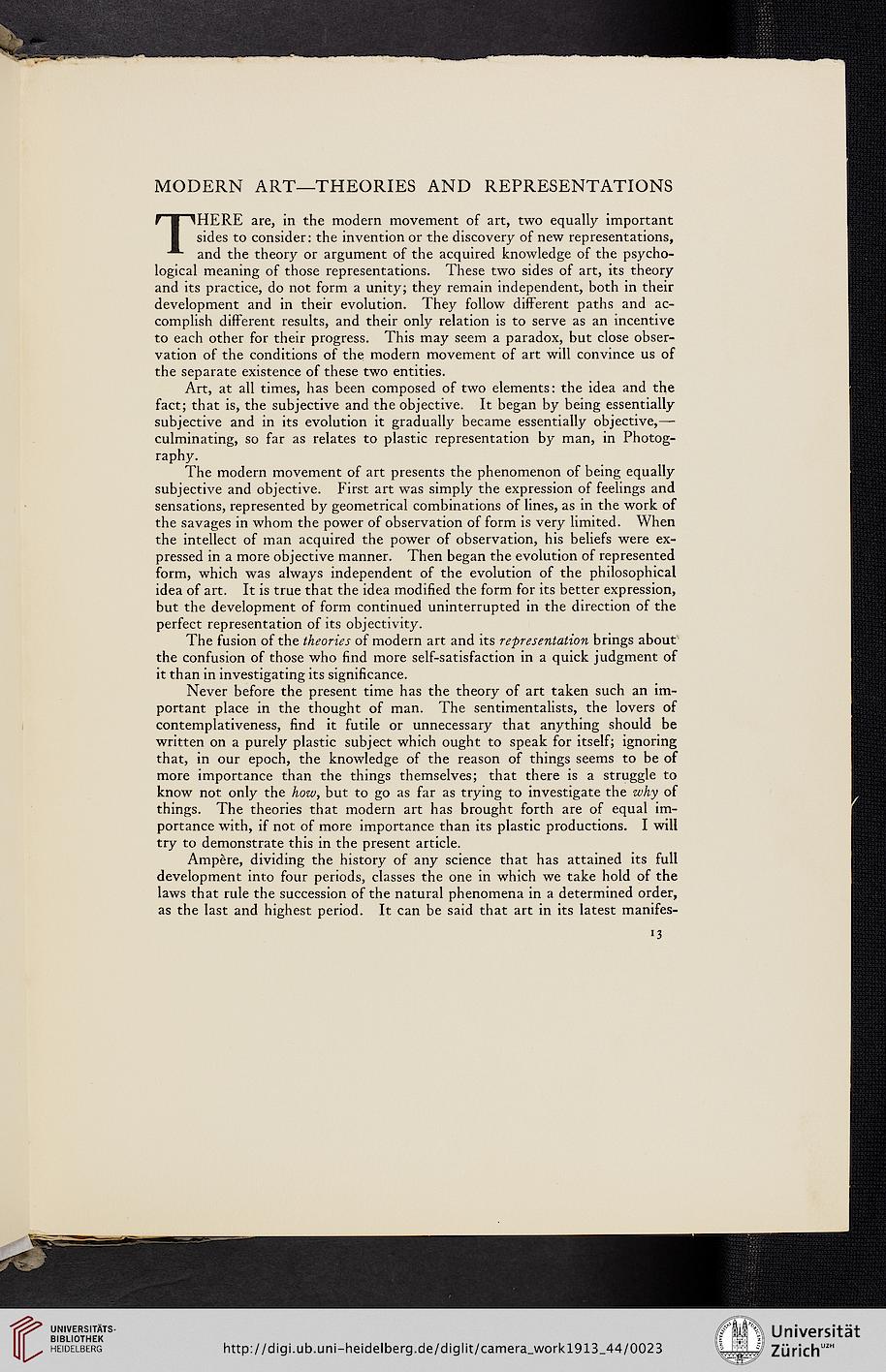 THERE are, in the modern movement of art, two equally important
sides to consider: the invention or the discovery of new representations,
and the theory or argument of the acquired knowledge of the psycho-
logical meaning of those representations. These two sides of art, its theory
and its practice, do not form a unity; they remain independent, both in their
development and in their evolution. They follow different paths and ac-
complish different results, and their only relation is to serve as an incentive
to each other for their progress. This may seem a paradox, but close obser-
vation of the conditions of the modern movement of art will convince us of
the separate existence of these two entities.
Art, at all times, has been composed of two elements: the idea and the
fact; that is, the subjective and the objective. It began by being essentially
subjective and in its evolution it gradually became essentially objective,—
culminating, so far as relates to plastic representation by man, in Photog-
raphy.
The modern movement of art presents the phenomenon of being equally
subjective and objective. First art was simply the expression of feelings and
sensations, represented by geometrical combinations of lines, as in the work of
the savages in whom the power of observation of form is very limited. When
the intellect of man acquired the power of observation, his beliefs were ex-
pressed in a more objective manner. Then began the evolution of represented
form, which was always independent of the evolution of the philosophical
idea of art. It is true that the idea modified the form for its better expression,
but the development of form continued uninterrupted in the direction of the
perfect representation of its objectivity.
The fusion of the theories of modern art and its representation brings about
the confusion of those who find more self-satisfaction in a quick judgment of
it than in investigating its significance.
Never before the present time has the theory of art taken such an im-
portant place in the thought of man. The sentimentalists, the lovers of
contemplativeness, find it futile or unnecessary that anything should be
written on a purely plastic subject which ought to speak for itself; ignoring
that, in our epoch, the knowledge of the reason of things seems to be of
more importance than the things themselves; that there is a struggle to
know not only the how, but to go as far as trying to investigate the why of
things. The theories that modern art has brought forth are of equal im-
portance with, if not of more importance than its plastic productions. I will
try to demonstrate this in the present article.
Ampere, dividing the history of any science that has attained its full
development into four periods, classes the one in which we take hold of the
laws that rule the succession of the natural phenomena in a determined order,
as the last and highest period. It can be said that art in its latest manifes-