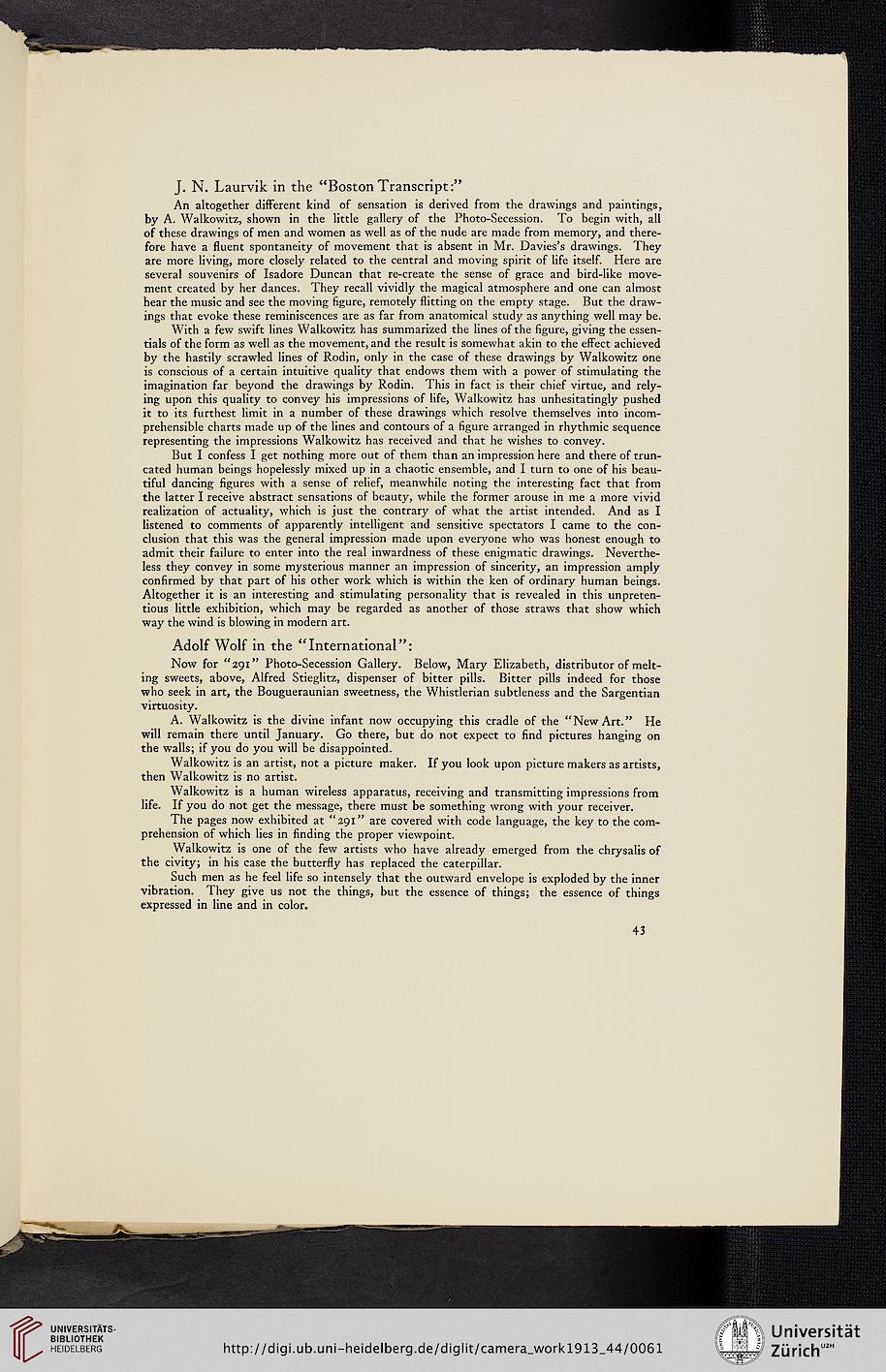 Information about OCR text
J. N. Laurvik in the “BostonTranscript:”
An altogether different kind of sensation is derived from the drawings and paintings,
by A. Walkowitz, shown in the little gallery of the Photo-Secession. To begin with, all
of these drawings of men and women as well as of the nude are made from memory, and there-
fore have a fluent spontaneity of movement that is absent in Mr. Davies’s drawings. They
are more living, more closely related to the central and moving spirit of life itself. Here are
several souvenirs of Isadore Duncan that re-create the sense of grace and bird-like move-
ment created by her dances. They recall vividly the magical atmosphere and one can almost
hear the music and see the moving figure, remotely flitting on the empty stage. But the draw-
ings that evoke these reminiscences are as far from anatomical study as anything well may be.
With a few swift lines Walkowitz has summarized the lines of the figure, giving the essen-
tials of the form as well as the movement, and the result is somewhat akin to the effect achieved
by the hastily scrawled lines of Rodin, only in the case of these drawings by Walkowitz one
is conscious of a certain intuitive quality that endows them with a power of stimulating the
imagination far beyond the drawings by Rodin. This in fact is their chief virtue, and rely-
ing upon this quality to convey his impressions of life, Walkowitz has unhesitatingly pushed
it to its furthest limit in a number of these drawings which resolve themselves into incom-
prehensible charts made up of the lines and contours of a figure arranged in rhythmic sequence
representing the impressions Walkowitz has received and that he wishes to convey.
But I confess I get nothing more out of them than an impression here and there of trun-
cated human beings hopelessly mixed up in a chaotic ensemble, and I turn to one of his beau-
tiful dancing figures with a sense of relief, meanwhile noting the interesting fact that from
the latter I receive abstract sensations of beauty, while the former arouse in me a more vivid
realization of actuality, which is just the contrary of what the artist intended. And as I
listened to comments of apparently intelligent and sensitive spectators I came to the con-
clusion that this was the general impression made upon everyone who was honest enough to
admit their failure to enter into the real inwardness of these enigmatic drawings. Neverthe-
less they convey in some mysterious manner an impression of sincerity, an impression amply
confirmed by that part of his other work which is within the ken of ordinary human beings.
Altogether it is an interesting and stimulating personality that is revealed in this unpreten-
tious little exhibition, which may be regarded as another of those straws that show which
way the wind is blowing in modern art.
Adolf Wolf in the “International”:
Now for “291” Photo-Secession Gallery. Below, Mary Elizabeth, distributor of melt-
ing sweets, above, Alfred Stieglitz, dispenser of bitter pills. Bitter pills indeed for those
who seek in art, the Bougueraunian sweetness, the Whistlerian subtleness and the Sargentian
virtuosity.
A. Walkowitz is the divine infant now occupying this cradle of the “New Art.” He
will remain there until January. Go there, but do not expect to find pictures hanging on
the walls; if you do you will be disappointed.
Walkowitz is an artist, not a picture maker. If you look upon picture makers as artists,
then Walkowitz is no artist.
Walkowitz is a human wireless apparatus, receiving and transmitting impressions from
life. If you do not get the message, there must be something wrong with your receiver.
The pages now exhibited at “291” are covered with code language, the key to the com-
prehension of which lies in finding the proper viewpoint.
Walkowitz is one of the few artists who have already emerged from the chrysalis of
the civity; in his case the butterfly has replaced the caterpillar.
Such men as he feel life so intensely that the outward envelope is exploded by the inner
vibration. They give us not the things, but the essence of things; the essence of things
expressed in line and in color.