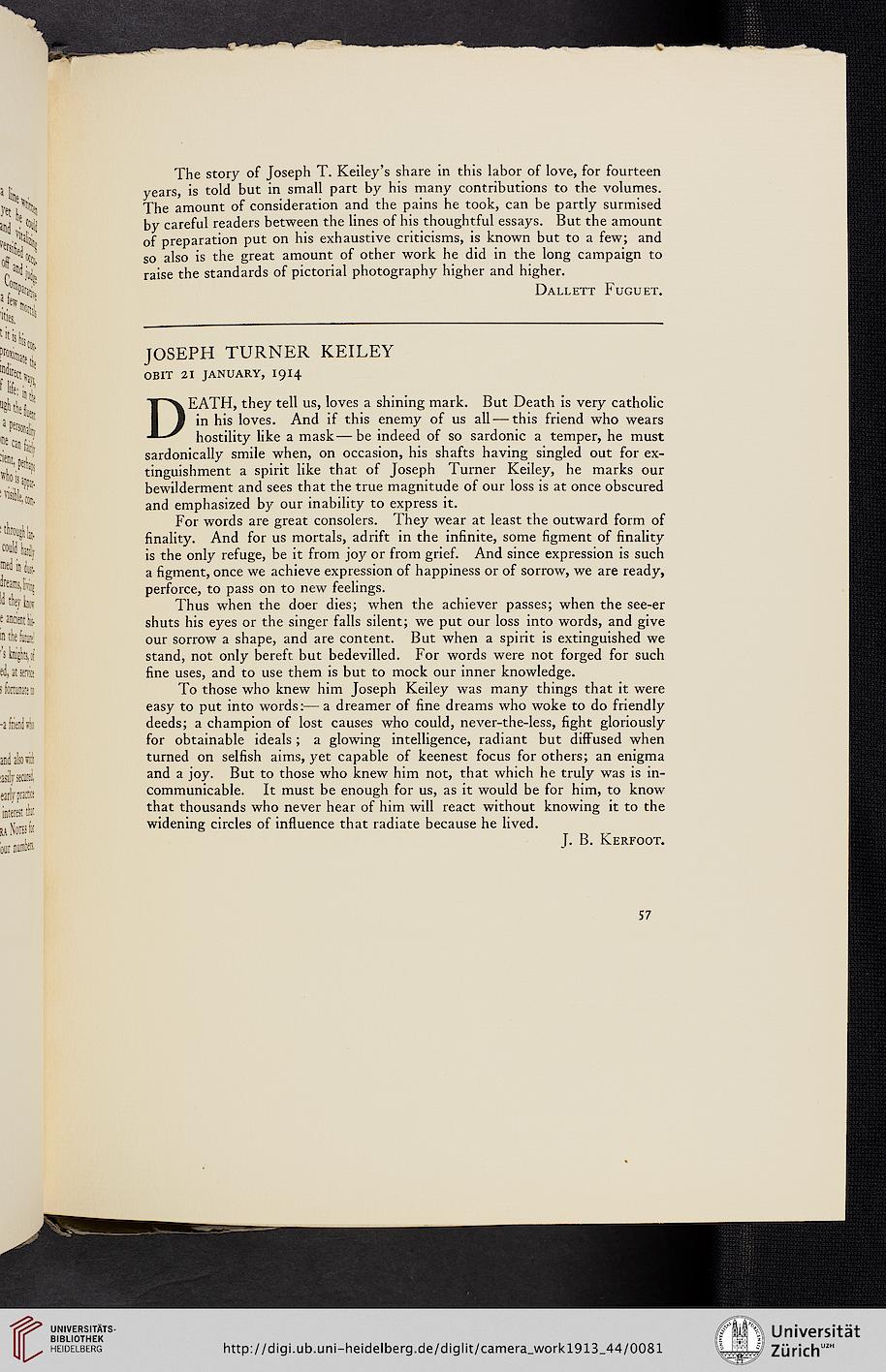 Information about OCR text
The story of Joseph T. Keiley’s share in this labor of love, for fourteen
years, is told but in small part by his many contributions to the volumes.
The amount of consideration and the pains he took, can be partly surmised
by careful readers between the lines of his thoughtful essays. But the amount
of preparation put on his exhaustive criticisms, is known but to a few; and
so also is the great amount of other work he did in the long campaign to
raise the standards of pictorial photography higher and higher.
Dallett Fuguet.

JOSEPH TURNER KEILEY
OBIT 21 JANUARY, 1914
DEATH, they tell us, loves a shining mark. But Death is very catholic
in his loves. And if this enemy of us all — this friend who wears
hostility like a mask—be indeed of so sardonic a temper, he must
sardonically smile when, on occasion, his shafts having singled out for ex-
tinguishment a spirit like that of Joseph Turner Keiley, he marks our
bewilderment and sees that the true magnitude of our loss is at once obscured
and emphasized by our inability to express it.
For words are great consolers. They wear at least the outward form of
finality. And for us mortals, adrift in the infinite, some figment of finality
is the only refuge, be it from joy or from grief. And since expression is such
a figment, once we achieve expression of happiness or of sorrow, we are ready,
perforce, to pass on to new feelings.
Thus when the doer dies; when the achiever passes; when the see-er
shuts his eyes or the singer falls silent; we put our loss into words, and give
our sorrow a shape, and are content. But when a spirit is extinguished we
stand, not only bereft but bedevilled. For words were not forged for such
fine uses, and to use them is but to mock our inner knowledge.
To those who knew him Joseph Keiley was many things that it were
easy to put into words:—a dreamer of fine dreams who woke to do friendly
deeds; a champion of lost causes who could, never-the-less, fight gloriously
for obtainable ideals; a glowing intelligence, radiant but diffused when
turned on selfish aims, yet capable of keenest focus for others; an enigma
and a joy. But to those who knew him not, that which he truly was is in-
communicable. It must be enough for us, as it would be for him, to know
that thousands who never hear of him will react without knowing it to the
widening circles of influence that radiate because he lived.