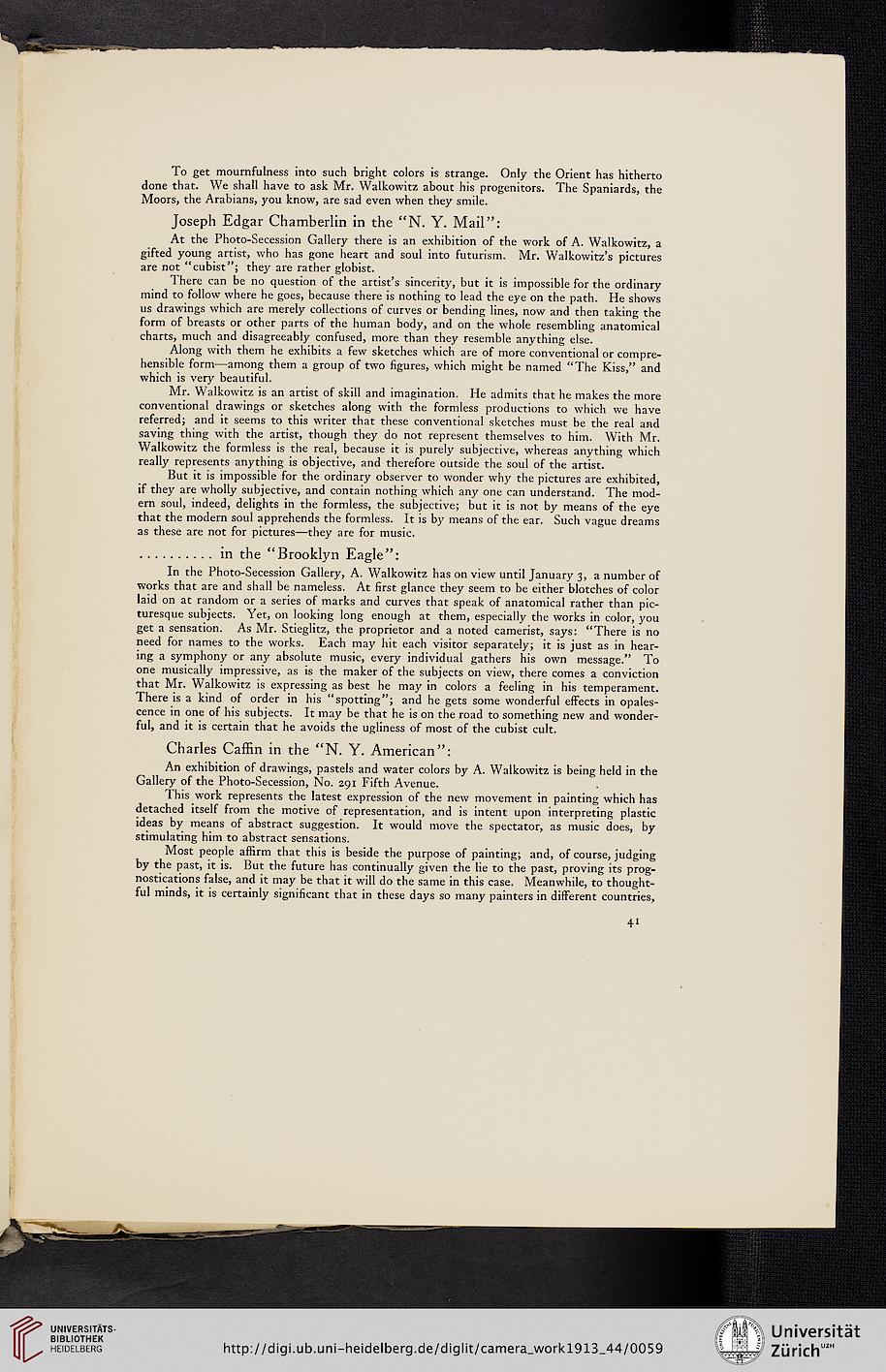 Information about OCR text
To get mournfulness into such bright colors is strange. Only the Orient has hitherto
done that. We shall have to ask Mr. Walkowitz about his progenitors. The Spaniards, the
Moors, the Arabians, you know, are sad even when they smile.
Joseph Edgar Chamberlin in the “N. Y. Mail”:
At the Photo-Secession Gallery there is an exhibition of the work of A. Walkowitz, a
gifted young artist, who has gone heart and soul into futurism. Mr. Walkowitz’s pictures
are not ‘‘cubist”; they are rather globist.
There can be no question of the artist’s sincerity, but it is impossible for the ordinary
mind to follow where he goes, because there is nothing to lead the eye on the path. He shows
us drawings which are merely collections of curves or bending lines, now and then taking the
form of breasts or other parts of the human body, and on the whole resembling anatomical
charts, much and disagreeably confused, more than they resemble anything else.
Along with them he exhibits a few sketches which are of more conventional or compre-
hensible form—among them a group of two figures, which might be named “The Kiss,” and
which is very beautiful.
Mr. Walkowitz is an artist of skill and imagination. He admits that he makes the more
conventional drawings or sketches along with the formless productions to which we have
referred; and it seems to this writer that these conventional sketches must be the real and
saving thing with the artist, though they do not represent themselves to him. With Mr.
Walkowitz the formless is the real, because it is purely subjective, whereas anything which
really represents anything is objective, and therefore outside the soul of the artist.
But it is impossible for the ordinary observer to wonder why the pictures are exhibited,
if they are wholly subjective, and contain nothing which any one can understand. The mod-
ern soul, indeed, delights in the formless, the subjective; but it is not by means of the eye
that the modern soul apprehends the formless. It is by means of the ear. Such vague dreams
as these are not for pictures—they are for music.
.in the “Brooklyn Eagle”:
In the Photo-Secession Gallery, A. Walkowitz has on view until January 3, a number of
works that are and shall be nameless. At first glance they seem to be either blotches of color
laid on at random or a series of marks and curves that speak of anatomical rather than pic-
turesque subjects. Yet, on looking long enough at them, especially the works in color, you
get a sensation. As Mr. Stieglitz, the proprietor and a noted camerist, says: “There is no
need for names to the works. Each may hit each visitor separately; it is just as in hear-
ing a symphony or any absolute music, every individual gathers his own message.” To
one musically impressive, as is the maker of the subjects on view, there comes a conviction
that Mr. Walkowitz is expressing as best he may in colors a feeling in his temperament.
There is a kind of order in his “spotting”; and he gets some wonderful effects in opales-
cence in one of his subjects. It may be that he is on the road to something new and wonder-
ful, and it is certain that he avoids the ugliness of most of the cubist cult.
Charles Caffin in the “N. Y. American”:
An exhibition of drawings, pastels and water colors by A. Walkowitz is being held in the
Gallery of the Photo-Secession, No. 291 Fifth Avenue.
This work represents the latest expression of the new movement in painting which has
detached itself from the motive of representation, and is intent upon interpreting plastic
ideas by means of abstract suggestion. It would move the spectator, as music does, by
stimulating him to abstract sensations.
Most people affirm that this is beside the purpose of painting; and, of course, judging
by the past, it is. But the future has continually given the lie to the past, proving its prog-
nostications false, and it may be that it will do the same in this case. Meanwhile, to thought-
ful minds, it is certainly significant that in these days so many painters in different countries.