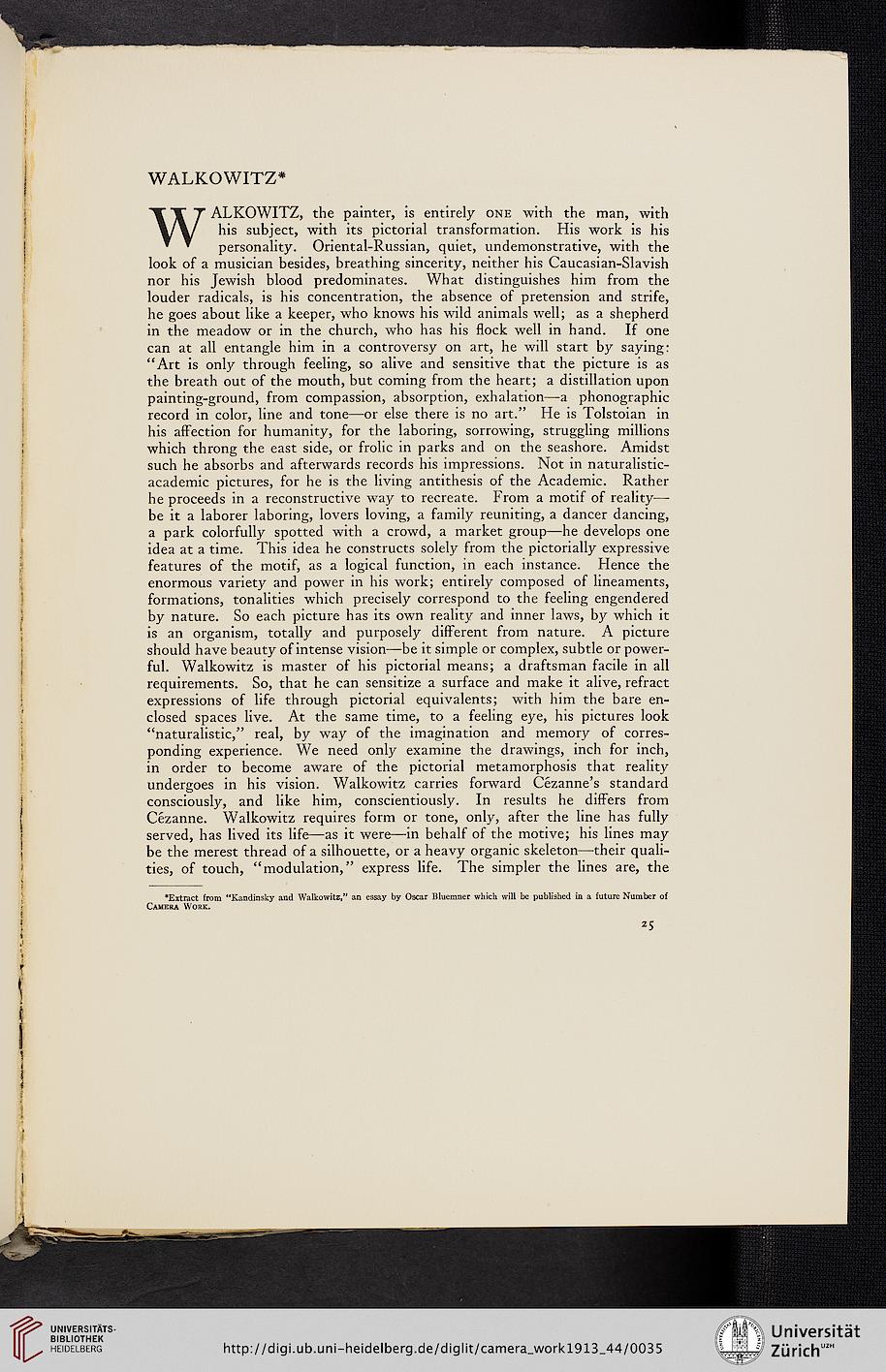 WALKOWITZ, the painter, is entirely one with the man, with
his subject, with its pictorial transformation. His work is his
personality. Oriental-Russian, quiet, undemonstrative, with the
look of a musician besides, breathing sincerity, neither his Caucasian-Slavish
nor his Jewish blood predominates. What distinguishes him from the
louder radicals, is his concentration, the absence of pretension and strife,
he goes about like a keeper, who knows his wild animals well; as a shepherd
in the meadow or in the church, who has his flock well in hand. If one
can at all entangle him in a controversy on art, he will start by saying:
“Art is only through feeling, so alive and sensitive that the picture is as
the breath out of the mouth, but coming from the heart; a distillation upon
painting-ground, from compassion, absorption, exhalation—a phonographic
record in color, line and tone—or else there is no art.” He is Tolstoian in
his affection for humanity, for the laboring, sorrowing, struggling millions
which throng the east side, or frolic in parks and on the seashore. Amidst
such he absorbs and afterwards records his impressions. Not in naturalistic-
academic pictures, for he is the living antithesis of the Academic. Rather
he proceeds in a reconstructive way to recreate. From a motif of reality—
be it a laborer laboring, lovers loving, a family reuniting, a dancer dancing,
a park colorfully spotted with a crowd, a market group—he develops one
idea at a time. This idea he constructs solely from the pictorially expressive
features of the motif, as a logical function, in each instance. Hence the
enormous variety and power in his work; entirely composed of lineaments,
formations, tonalities which precisely correspond to the feeling engendered
by nature. So each picture has its own reality and inner laws, by which it
is an organism, totally and purposely different from nature. A picture
should have beauty of intense vision—be it simple or complex, subtle or power-
ful. Walkowitz is master of his pictorial means; a draftsman facile in all
requirements. So, that he can sensitize a surface and make it alive, refract
expressions of life through pictorial equivalents; with him the bare en-
closed spaces live. At the same time, to a feeling eye, his pictures look
“naturalistic,” real, by way of the imagination and memory of corres-
ponding experience. We need only examine the drawings, inch for inch,
in order to become aware of the pictorial metamorphosis that reality
undergoes in his vision. Walkowitz carries forward Cezanne’s standard
consciously, and like him, conscientiously. In results he differs from
Cezanne. Walkowitz requires form or tone, only, after the line has fully
served, has lived its life—as it were—in behalf of the motive; his lines may
be the merest thread of a silhouette, or a heavy organic skeleton—their quali-
ties, of touch, “modulation,” express life. The simpler the lines are, the
•Extract from “Kandinsky and Walkowitz,” an essay by Oscar Bluemner which will be published in a future Number of
Camera Work.