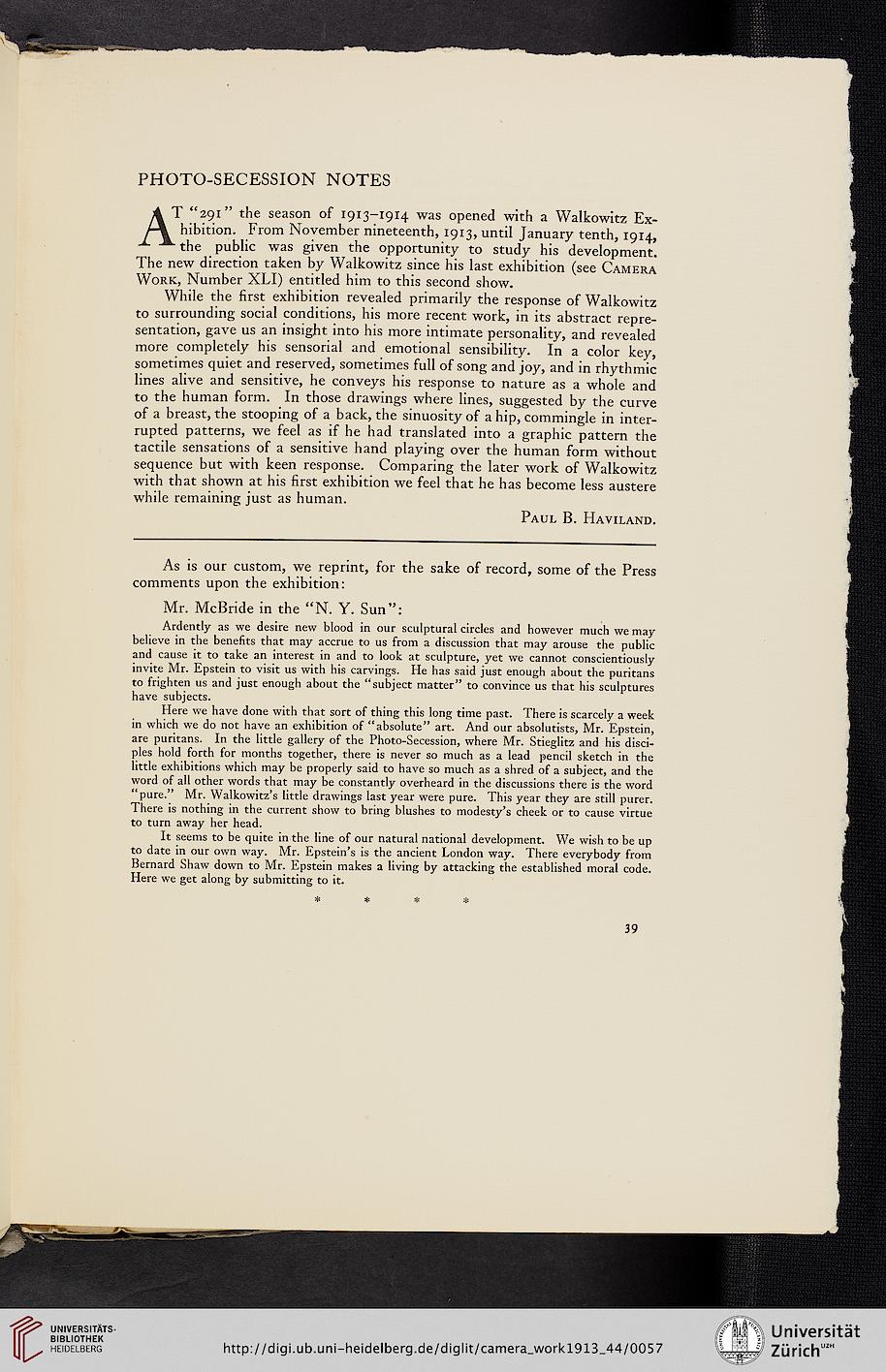 AT “291” the season of 1913-1914 was opened with a Walkowitz Ex-
hibition. From November nineteenth, 1913, until January tenth, 1914,
"the public was given the opportunity to study his development.
The new direction taken by Walkowitz since his last exhibition (see Camera
Work, Number XLI) entitled him to this second show.
While the first exhibition revealed primarily the response of Walkowitz
to surrounding social conditions, his more recent work, in its abstract repre-
sentation, gave us an insight into his more intimate personality, and revealed
more completely his sensorial and emotional sensibility. In a color key,
sometimes quiet and reserved, sometimes full of song and joy, and in rhythmic
lines alive and sensitive, he conveys his response to nature as a whole and
to the human form. In those drawings where lines, suggested by the curve
of a breast, the stooping of a back, the sinuosity of a hip, commingle in inter-
rupted patterns, we feel as if he had translated into a graphic pattern the
tactile sensations of a sensitive hand playing over the human form without
sequence but with keen response. Comparing the later work of Walkowitz
with that shown at his first exhibition we feel that he has become less austere
while remaining just as human.
Paul B. Haviland.

As is our custom, we reprint, for the sake of record, some of the Press
comments upon the exhibition:
Mr. McBride in the “N. Y. Sun”:
Ardently as we desire new blood in our sculptural circles and however much we may
believe in the benefits that may accrue to us from a discussion that may arouse the public
and cause it to take an interest in and to look at sculpture, yet we cannot conscientiously
invite Mr. Epstein to visit us with his carvings. He has said just enough about the puritans
to frighten us and just enough about the “subject matter” to convince us that his sculptures
have subjects.
Here we have done with that sort of thing this long time past. There is scarcely a week
in which we do not have an exhibition of “absolute” art. And our absolutists, Mr. Epstein,
are puritans. In the little gallery of the Photo-Secession, where Mr. Stieglitz and his disci-
ples hold forth for months together, there is never so much as a lead pencil sketch in the
little exhibitions which may be properly said to have so much as a shred of a subject, and the
word of all other words that may be constantly overheard in the discussions there is the word
“pure.” Mr. Walkowitz’s little drawings last year were pure. This year they are still purer.
There is nothing in the current show to bring blushes to modesty’s cheek or to cause virtue
to turn away her head.
It seems to be quite in the line of our natural national development. We wish to be up
to date in our own way. Mr. Epstein’s is the ancient London way. There everybody from
Bernard Shaw down to Mr. Epstein makes a living by attacking the established moral code.
Here we get along by submitting to it.
* * * *