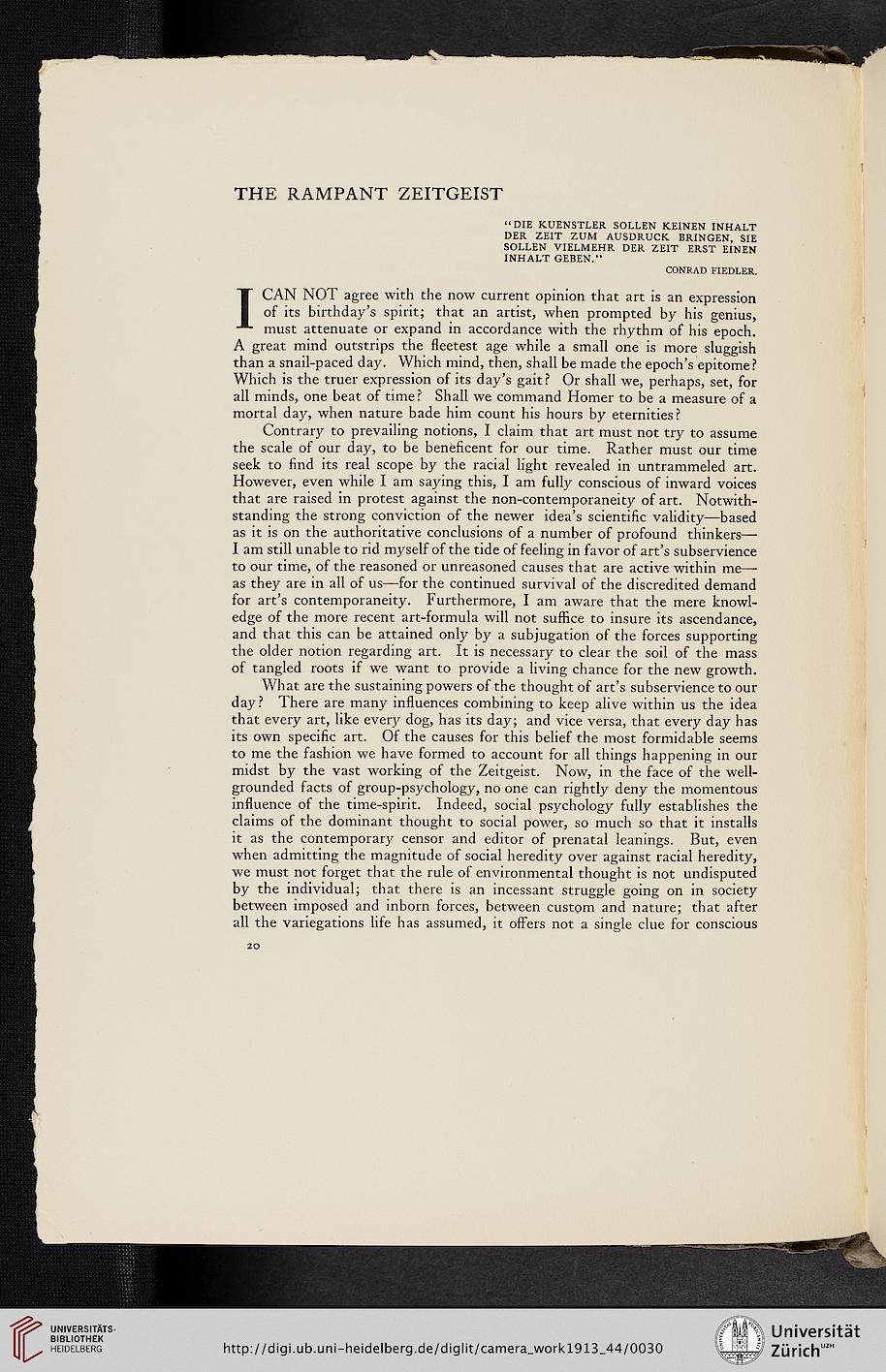 “DIE KUENSTLER SOLLEN KEINEN INHALT
DER ZEIT ZUM AUSDRUCK BRINGEN, SIE
SOLLEN VIELMEHR DER ZEIT ERST EINEN
INHALT GEBEN.”
CONRAD FIEDLER.
I CAN NOT agree with the now current opinion that art is an expression
of its birthday’s spirit; that an artist, when prompted by his genius,
must attenuate or expand in accordance with the rhythm of his epoch.
A great mind outstrips the fleetest age while a small one is more sluggish
than a snail-paced day. Which mind, then, shall be made the epoch’s epitome?
Which is the truer expression of its day’s gait? Or shall we, perhaps, set, for
all minds, one beat of time? Shall we command Homer to be a measure of a
mortal day, when nature bade him count his hours by eternities?
Contrary to prevailing notions, I claim that art must not try to assume
the scale of our day, to be beneficent for our time. Rather must our time
seek to find its real scope by the racial light revealed in untrammeled art.
However, even while I am saying this, I am fully conscious of inward voices
that are raised in protest against the non-contemporaneity of art. Notwith-
standing the strong conviction of the newer idea’s scientific validity—based
as it is on the authoritative conclusions of a number of profound thinkers—
I am still unable to rid myself of the tide of feeling in favor of art’s subservience
to our time, of the reasoned or unreasoned causes that are active within me—
as they are in all of us—for the continued survival of the discredited demand
for art’s contemporaneity. Furthermore, I am aware that the mere knowl-
edge of the more recent art-formula will not suffice to insure its ascendance,
and that this can be attained only by a subjugation of the forces supporting
the older notion regarding art. It is necessary to clear the soil of the mass
of tangled roots if we want to provide a living chance for the new growth.
What are the sustaining powers of the thought of art’s subservience to our
day? There are many influences combining to keep alive within us the idea
that every art, like every dog, has its day; and vice versa, that every day has
its own specific art. Of the causes for this belief the most formidable seems
to me the fashion we have formed to account for all things happening in our
midst by the vast working of the Zeitgeist. Now, in the face of the well-
grounded facts of group-psychology, no one can rightly deny the momentous
influence of the time-spirit. Indeed, social psychology fully establishes the
claims of the dominant thought to social power, so much so that it installs
it as the contemporary censor and editor of prenatal leanings. But, even
when admitting the magnitude of social heredity over against racial heredity,
we must not forget that the rule of environmental thought is not undisputed
by the individual; that there is an incessant struggle going on in society
between imposed and inborn forces, between custom and nature; that after
all the variegations life has assumed, it offers not a single clue for conscious
20