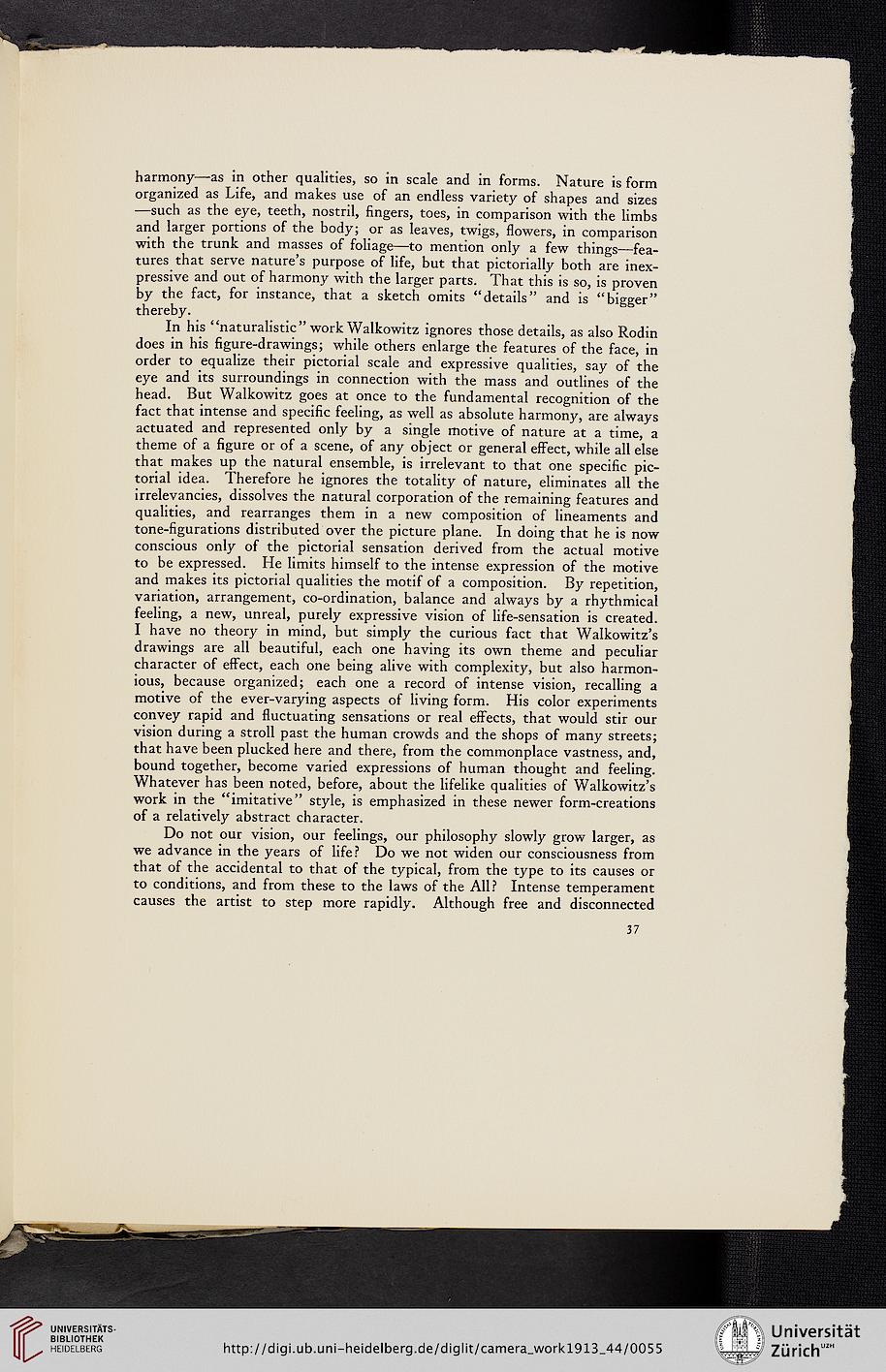 Information about OCR text
harmony—as in other qualities, so in scale and in forms. Nature is form
organized as Life, and makes use of an endless variety of shapes and sizes
—such as the eye, teeth, nostril, fingers, toes, in comparison with the limbs
and larger portions of the body; or as leaves, twigs, flowers, in comparison
with the trunk and masses of foliage—to mention only a few things—fea-
tures that serve nature’s purpose of life, but that pictorially both are inex-
pressive and out of harmony with the larger parts. That this is so, is proven
by the fact, for instance, that a sketch omits “details” and is “bigger”
thereby.
In his “naturalistic” work Walkowitz ignores those details, as also Rodin
does in his figure-drawings; while others enlarge the features of the face, in
order to equalize their pictorial scale and expressive qualities, say of the
eye and its surroundings in connection with the mass and outlines of the
head. But Walkowitz goes at once to the fundamental recognition of the
fact that intense and specific feeling, as well as absolute harmony, are always
actuated and represented only by a single motive of nature at a time, a
theme of a figure or of a scene, of any object or general effect, while all else
that makes up the natural ensemble, is irrelevant to that one specific pic-
torial idea. Therefore he ignores the totality of nature, eliminates all the
irrelevancies, dissolves the natural corporation of the remaining features and
qualities, and rearranges them in a new composition of lineaments and
tone-figurations distributed over the picture plane. In doing that he is now
conscious only of the pictorial sensation derived from the actual motive
to be expressed. He limits himself to the intense expression of the motive
and makes its pictorial qualities the motif of a composition. By repetition,
variation, arrangement, co-ordination, balance and always by a rhythmical
feeling, a new, unreal, purely expressive vision of life-sensation is created.
I have no theory in mind, but simply the curious fact that Walkowitz’s
drawings are all beautiful, each one having its own theme and peculiar
character of effect, each one being alive with complexity, but also harmon-
ious, because organized; each one a record of intense vision, recalling a
motive of the ever-varying aspects of living form. His color experiments
convey rapid and fluctuating sensations or real effects, that would stir our
vision during a stroll past the human crowds and the shops of many streets;
that have been plucked here and there, from the commonplace vastness, and,
bound together, become varied expressions of human thought and feeling.
Whatever has been noted, before, about the lifelike qualities of Walkowitz’s
work in the “imitative” style, is emphasized in these newer form-creations
of a relatively abstract character.
Do not our vision, our feelings, our philosophy slowly grow larger, as
we advance in the years of life? Do we not widen our consciousness from
that of the accidental to that of the typical, from the type to its causes or
to conditions, and from these to the laws of the All? Intense temperament
causes the artist to step more rapidly. Although free and disconnected